Jesse Lauriston Livermore was an American stock trader, who is remembered as the pioneer of day trading. Born into a poverty-stricken farming family, he was pulled out of school by his father at the age of fourteen. Aided by his mother, he ran away from home to start working as a board boy in a stockbroker’s office in Boston, quickly realizing that there was nothing random about the ticker numbers that were coming through. At fifteen, he started betting at a bucket shop, earning a neat sum of $10,000 by the age of 22. Thereafter, he moved to New York City, using what we now call ‘technical analyses’ as the basis for his trades at Wall Street. In his long career, spanning nearly half a century, he had thrice filed for bankruptcy and in-between became one of the richest men of the world. His principles, especially the effects of emotion on trading, continue to be studied to this day. American Celebrities
Leo Entrepreneurs
American Investors
American Entrepreneurs
Leo Men
Childhood & Early Life
Jesse Lauriston Livermore was born on July 26, 1877 in Shrewsbury, Massachusetts. His father, Hiram Brooks Livermore, was a farmer. His mother’s name was Laura Esther Livermore. Born youngest of his parents’ three children, he had a sister named Mabel Loraine Blethen and a brother called Elliot Livermore.
When he was still a baby, his family moved to Acton, also in Massachusetts. It was here that he spent his formative years, receiving hardly any attention from his father. However, his mother was determined to give him a proper upbringing.
An intelligent child, he learned to read and write at the age of three and half. By the time he was five, he was reading newspapers including the financial pages.
In his grammar school, he showed excellent talent in numbers, especially in mental mathematics, completing three years’ mathematics syllabus in just one year. But as he turned fourteen, his father pulled him out of school to employ him at the farm.
The move not only devastated him, but also his mother. She therefore, gave him $5 and put him on a carriage with clear instruction that he should be dropped off at certain address.
Instead of going to the fixed destination, Jesse managed to convince the driver to drop him off at Paine Webber, a stockbroker in Boston. Here he managed to get a job, earning $5 a week as a board boy. 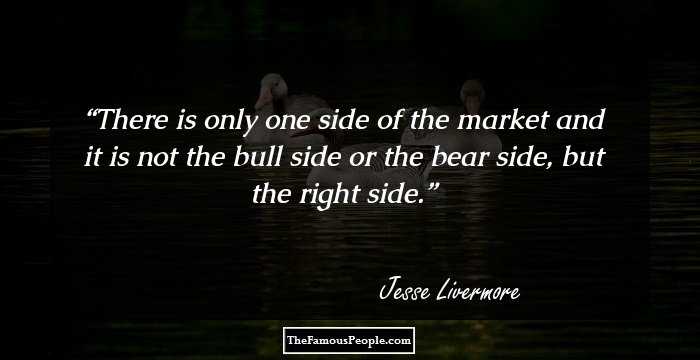 Who Is The Most Popular BTS Member?
Early Career
Working as a board boy was an ideal job for Jesse Livermore since it involved writing down the prices of shares on a chalkboard as soon as they came through the tape. Very soon he was tracking them down in his journal, finding a pattern in the numbers.
In 1892, at the age of 15, he took his first plunge, betting $5 on Chicago, Burlington and Quincy Railroad at a bucket shop, which allowed customers to bet on stocks and securities without actually owning them. He earned $3.12 on his first bet.
By sixteen, his earnings from the bucket shop far exceeded his income from Paine Webber. Consequently, he started trading full time at the bucket shop, sometime under disguise, always making profits. 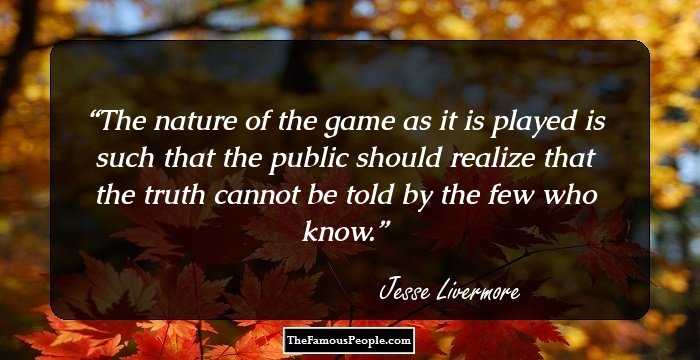 Quotes: Nature
To Wall Street
By 1899, Jesse Livermore had made $10,000 and with that he moved to New York City, where he began trading at the Wall Street. But very soon, he lost the entire sum because the ticker’s tape was lagging by thirty to forty minutes, making it impossible to make correct decision.
After losing heavily at Wall Street, Jesse borrowed $500 and he moved to St. Louis to trade in virgin territory. People at St. Louis didn’t have the knowledge of successful bucket shop trading skill that Jesse Livermore had.
After a successful run, he returned to New York with $2,500, repaid his $500 loan and decided to trade on both the NYSE and the bucket shops. In 1901, he returned to Wall Street, in the same year buying stock in Northern Pacific Railway, shortly turning his $10,000 into $500,000.
On April 17, 1906, he took a massive short position on Union Pacific Railroad. The next day, San Francisco was hit with a terrible earthquake, earning him a $250,000 profit.
In October 1907, when the New York Stock Exchange fell nearly 50% from its peak in the previous year, creating Bankers’ Panic, he took another short position, earning $1, 000,000 in a single day. However, he refrained from taking further shorts at the request of his mentor J.P. Morgan.
Continue Reading Below
Instead of taking shorts, he now started buying as much shares as he could, encouraging others to do so, leading to early recovery of the share prices. While doing so, he made a huge profit, taking his total worth to $3 million, becoming a hero in the eyes of other traders.
He now started living extravagantly. He bought an apartment on the Upper West Side, a rail car and a yacht worth $200,000. In the meanwhile, he continued to trade, very soon, having $5 million to his name.
In 1908, he had his second fall when on the advice of a commodity trader named Teddy Price, he began to buy cotton, not knowing that Price was actually selling his shares. As a result, he lost almost 90% of what he had made in the previous year.
After 1908, his loses began to grow and eventually he accumulated a debt of $1 million. In 1915, he was forced to declare bankruptcy. But shortly, he was offered a trading facility of 500 shares, which he used judiciously and by 1917, he was back on the Wall Street.
In 1918, he began to invest heavily on cotton, trying to corner the market; but gave it up on the request of President Woodrow Wilson, who had invited him to the White House. Thereafter, he continued to trade, netting approximately $100 million upon the Wall Street crash in September-October 1929.
In early 1930s, because of some personal problems, he began to lose mental equilibrium. With the launch of the U.S. Securities and Exchange Commission in 1934 his trading was also affected.
In 1934, he declared bankruptcy for the second time and his membership at Chicago Board of Trade was suspended. Although he believed he could make a comeback, it never happened.
In 1937, he was in position to pay off his $800,000 tax bill and in 1939 he opened a financial advisory business, where he sold a technical analysis system. But his liabilities remained greater than his assets.
Major works
Jesse Livermore is best known for his 1940 book, ‘How to Trade Stocks’. Interwoven with autobiographical as well as historical details, the book offers step-by-step guidance on various aspects of trading such as how-to read and analyze market and stock behavior, market timing, money management and emotional control etc.
Family & Personal Life
In October 1900, at the age of 23, Jesse Livermore married Nettie Jordan of Indianapolis. However, they separated shortly after that and ultimately divorced in 1917.
On December 2, 1918, he married 22-year old Dorothy Fox Wendt, a former Ziegfeld girl in Ziegfeld Follies. They had two sons, Jesse Livermore II and Paul Livermore. In 1931, Dorothy Livermore filed for divorce, which was granted on September 16, 1932.
On March 28, 1933, he married 38-year-old singer and socialite, Harriet Metz Noble. They remained married until his suicide in 1940.
On November 28, 1940, Jesse Livermore killed himself with an Automatic Colt Pistol in the cloakroom of Sherry-Netherland hotel in Manhattan. He was then sixty-three years old.
You May Like

See the events in life of Jesse Livermore in Chronological Order