Jerry Eugene Pournelle was an American science-fiction writer, essayist and journalist. A lesser known fact about him is that he was a polymath too, with degrees in statistics, systems engineering, psychology and political science. He started writing non-science fiction work under the pseudonym of Wade Curtis or J. E. Pournelle. Critics believe that his stories always displayed a strong military theme. Another thing that makes him popular amongst the readers is the various “laws” that he published in his books, the most famous being his Iron Law of Bureaucracy. As a journalist, he earned recognition in the computer industry for his monthly columns called the Computing At Chaos Manor in Byte magazine. His columns were the industry's first and the longest-running monthly column, that were regularly published for a period of more than 20 years. After the termination of his contract he moved the column to his own website. He thoroughly opposed the US strategy regarding the gulf war, as he was of the opinion that the money spent on the war could have been used for developing energy technologies Hunter S. Thompson
Writers #2473
Media Personalities #2059
Continue Reading Below
DID WE MISS SOMEONE?
CLICK HERE AND TELL US
WE'LL MAKE SURE
THEY'RE HERE A.S.A.P
Quick Facts

American Celebrities
University Of Washington
Leo Writers
Male Writers
American Writers
Childhood & Early Life
Jerry Pournelle was born on August 7, 1933 in Shreveport, Louisiana, USA. He received his schooling from Capleville, Tennessee and served in the Korean War for the US Army.
After his return from the Korean War, he went to the University of Washington and received his BS in psychology and mathematics in 1955. Thereafter, he went on to obtain an MS in psychology, experimental statistics and systems engineering.
He completed his PhD in political science from the University of Washington, in 1964. For his political science dissertation, he created a 2-D coordinate system which could be used to distinguish political ideologies and called it the 'Pournelle chart'. 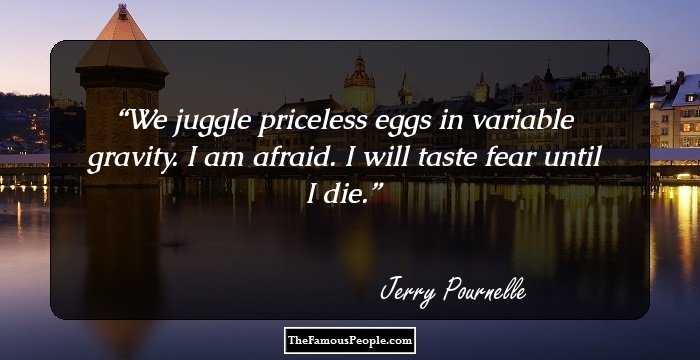 Quotes: Will, Fear, I
Continue Reading Below
You May Like

Who Is The Most Popular BTS Member?
Career
Jerry Pournelle worked as campaign director for the mayoral campaign of 1969 for Los Angeles Mayor Sam Yorty, who was a Demaocrat party candidate. Jerry was later on appointed as Executive Assistant to the Mayor in charge of research, but he quit from the position after two weeks.
After resigning from the position at Mayor’s office, he became a consultant to the Professional Educators of Los Angeles (PELA) in 1970. This group was known for its opposition to the unionization of school teachers in LA.
He worked in the operations research department at The Aerospace Corporation and the North America Rockwell Space Division, and later on became the founding president of the Pepperdine Research Institute.
A government budget cut reduced the demand for space research and he chose to become a science-fiction writer.

Russell Kirk and Stefan T Possony took Pournelle as their protégé. Possony and Pournelle penned several publications, including The Strategy of Technology which later became a textbook for the US Military Academy, US Air Force Academy, the Air War College and the National War College.

During the 1970s and 1980s he wrote articles for the magazine ‘The General’. The articles were about military tactics and war gaming in the military simulations industry.
In his 1977 novel, 'The Mercenary', a planet is threatened with mass destruction if a large part of its population doesn't shift to the countryside. The leading political party finds it unsuitable. However, the protagonist decides to crush the party completely and get people moved to the countryside.
He began writing the ‘Chaos Manor’ section in the ‘Byte’ magazine in 1979. The column was about his every-day experiences with his home office's hardware and software.
In 1984 the column was renamed to ‘Computing at Chaos Manor’. When the magazine decided to close its print version in US, Pournelle wrote for the magazine's online and international print editions.
Continue Reading Below
In his novel 'Footfall' (1985), elephant-like aliens take control over a part of Kansas. The President decides to annihilate the place with nuclear explosives, but with utmost secrecy. The protagonist then brings a twist to the plot and achieves surrender from the aliens instead.

The contract between Pournelle and Byte ended in 2006. He then began writing the column for his own website, Chaos Manor Reviews.

He suggested several “laws” in his books and the most famous one is his Iron Law of Bureaucracy. He stated "In any bureaucracy, the people devoted to the benefit of the bureaucracy itself always get in control and those dedicated to the goals the bureaucracy is suppose to accomplish have less and less influence, and sometimes are eliminated entirely".
Major Works

He attained great fame and recognition for the books he co-wrote with Larry Niven. Their 1985 novel Footfall reached the No. 1 spot on the New York Times Best Seller List and Lucifer's Hammer (1977) reached No. 2 on the same list. Their novels The Mote in God's Eye and The Gripping Hand were also very successful.

Awards & Achievements
Pournelle won the John W. Campbell Award for Best New Writer, in 1973.
In 1992, his book 'Fallen Angels' got him the Prometheus Award and he became the co-recipient of the Heinlein Society Award with author-friend Larry Niven in 2005.

He was also associated with American Association for the Advancement of Science, the British Interplanetary Society, the Royal Astronomical Society and the Operations Research Society of America.

Jerry Pournelle married Roberta Jane Isdell in 1959 and they had five children together.

In 2008, Pournelle was diagnosed with a brain tumour. He was able to battle it successfully with radiation treatment.

Jerry Pournelle died on 8 September 2017, from heart failure, at his home in California.

See the events in life of Jerry Pournelle in Chronological Order