Jeremy John Irons is an English actor known for his performance in movies like ‘The French Lieutenant's Woman,’ ‘Dead Ringers,’ and ‘Reversal of Fortune.’ He is also known for voicing ‘Scar’ in the popular Disney movie ‘The Lion King’ (1994). His portrayal of ‘Franz Kafka’ in Steven Soderbergh’s thriller ‘Kafka’ won him accolades. Known for his versatility, Jeremy has also played Batman’s loyal butler ‘Alfred Pennyworth’ in films like ‘Batman v Superman: Dawn of Justice’ and ‘Justice League.’ Over the years, he has won several accolades for his impressive performance. He has even received an ‘Academy Award’ for playing the role of ‘Claus von Bülow’ in ‘Reversal of Fortune.’ Apart from acting, Jeremy is also known for his charity work. He supports various causes and organizations, such as ‘Hungry Project.’ He also donates to the homeless and was nominated Goodwill Ambassador for ‘Food and Agriculture Organization of the United Nations.’ His father was an accountant and his great-great-grandfather was a metropolitan policeman, who was sacked for his drinking habits. He later became a chartist.

He was enrolled at ‘Sherborne School’ in Dorset when he was 13. He was the drummer in his school band ‘Four Pillars of Wisdom.’ He can also speak fluent French and is fond of horse riding.

He began his training as an actor at ‘Bristol Old Vic Theatre School.’ He performed in a number of plays as well as on the streets of Bristol before being signed professionally. 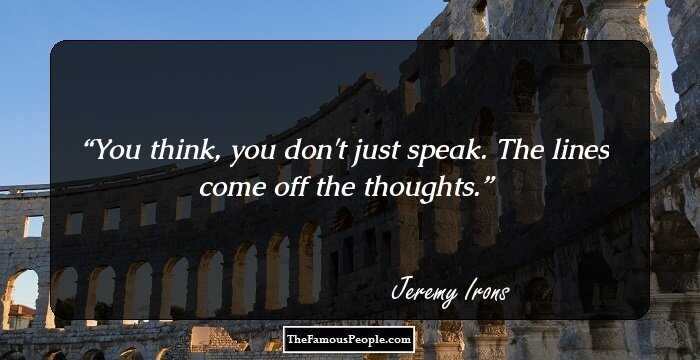 Jeremy started his career by performing in plays in his school and later went on to appear on the London stage, playing ‘John the Baptist’ in ‘Godspell’ in 1971. In the next few years, he appeared in a number of plays, including ‘Much Ado About Nothing,’ ‘The Winter’s Tale,’ ‘The Caretaker,’ and ‘The Taming of the Shrew.’

He made his television debut in 1971 with an appearance in the series ‘The Rivals of Sherlock Homes.’ He made several other appearances on British television. He made his big screen debut in 1980 when he played ‘Mikhail Fokine’ in ‘Nijinsky.’

He gained wider recognition when he played ‘Charles Ryder’ in the 1981 mini-series ‘Brideshead Revisited,’ which was an adaptation of Evelyn Waugh’s classic novel of the same name.

He made his Broadway debut in the 1984 Tom Stoppard-directed play ‘The Real Thing.’ He received a ‘Tony Award’ for this role.

In 1990, he landed what would eventually become his most popular role in the movie ‘Reversal of Fortune’ for which he received an ‘Academy Award’ along with many other accolades.

Over the course of his illustrious career, he has appeared in numerous films, establishing himself as a versatile actor.

He has acted in several critically acclaimed movies, including the 2013 film ‘Night Train to Lisbon’ and ‘The Man Who Knew Infinity’ in 2015.

Over the years, Irons has appeared in several TV series. From 2011 to 2013, he was part of the main cast of ‘The Borgias’ where he played ‘Rodrigo Borgia.’ In 2019, he played one of the main roles in the superhero drama television series ‘Watchmen.’ 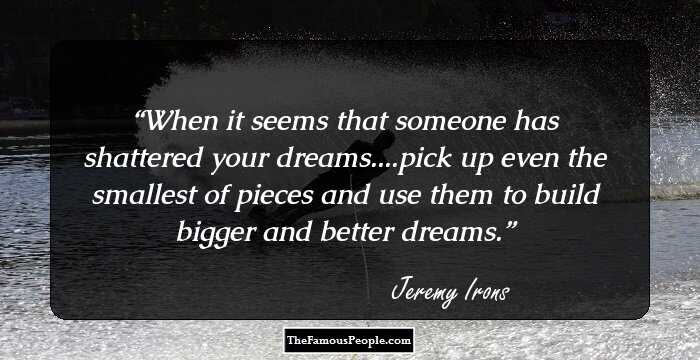 His first major film was ‘The French Lieutenant’s Woman.’ This romantic drama earned him a nomination for a ‘BAFTA Award.’

Some of his other major works are mystery thriller ‘Kafka,’ period drama ‘House of the Spirits,’ romantic dramas ‘M. Butterfly’ and ‘Lolita,’ action film ‘Die Hard with a Vengeance,’ adventure film ‘Dungeons and Dragons,’ and drama films ‘Merchant of Venice’ and ‘Being Julia.’

He was cast as ‘Alfred Pennyworth’ in ‘DC Extended Universe’ films ‘Batman vs Superman: Dawn of Justice’ and ‘Justice League.’

Apart from being a popular stage and film actor, he is also a renowned TV actor. Some of his popular TV shows are ‘Brideshead Revisited,’ ‘Elizabeth I,’ and ‘The Borgias.’

His first award for a movie was for his role as ‘Father Gabriel’ in the 1986 movie ‘The Mission.’ He received the ‘David di Donatello Award’ for ‘Best Foreign Actor.’

He voiced ‘Siegfried Sassoon’ in a documentary series titled ‘The Great War and the Shaping of the 20th Century’ for which he received the ‘Primetime Emmy Award’ for ‘Outstanding Voice-Over Performance.’

He has also received the ‘Honorary César,’ ‘European Film Award’ for ‘Special Achievement,’ and ‘François Truffaut Award’ at ‘Giffoni International Film Festival.’ In 2014, he was honored with the prestigious ‘Primetime Emmy Award’ under the ‘Outstanding Narrator’ category for ‘Game of Lions.’ 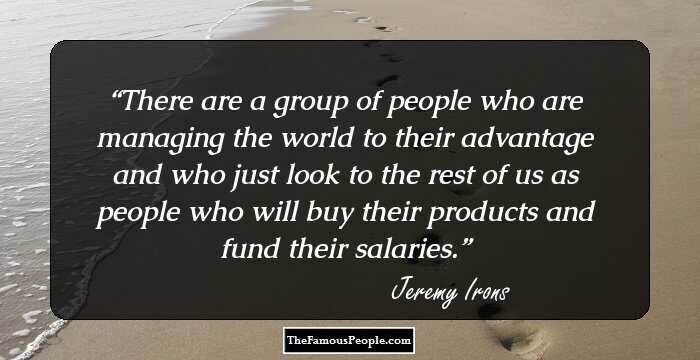 Jeremy owns ‘Kilcoe Castle’ near Ballydehob, County Cork in Ireland. He also has residences in The Liberties of Dublin, Cowes, and Oxfordshire.

In 1969, he married Julie Hallam, but they divorced later the same year.

He then married actress Sinéad Cusack in 1978. He appeared with her in ‘Waterland’ and in a few plays.

He has two sons, Samuel ‘Sam’ Irons and Maximilian ‘Max’ Irons. Samuel is a photographer and Max is an actor.

His family is Catholic, but Jeremy describes himself as practicing Catholic and doesn’t believe in going to the church.
Trivia
He became a Goodwill Ambassador for the UN in 2011.

He was awarded an honorary doctorate by ‘Southampton Solent University.’ He received Honorary Lifetime Membership from the ‘University College Dublin Law Society’ in 2008.

He was announced as the first chancellor of ‘Bath Spa University’ in 2016.

Quotes By Jeremy Irons | Quote Of The Day | Top 100 Quotes

See the events in life of Jeremy Irons in Chronological Order