Jennifer Love Hewitt is a popular American actor, singer-songwriter, author, and producer. She is best known for playing ‘Sarah Reeves Merrin’ in the coming-of-age series ‘Party of Five.’ She started off as a child actor in television and earned her first big break with the show ‘Kids Incorporated’ on ‘Disney.’ She also released her first album ‘Love Songs’ which established her as a singer-songwriter. After appearing in a number of movies like ‘Sister Act 2: Back in the Habit,’ ‘House Arrest,’ and ‘Trojan War,’ she appeared in ‘I Know What You Did Last Summer’ which turned out to be a breakthrough film in her career. She was cast as the lead character in the film and also in its sequel ‘I Still Know What You Did Last Summer.’ Her other hit films include, ‘If Only,’ ‘The Truth About Love,’ ‘Garfield,’ ‘The Client List,’ and ‘Jewtopia.’ She is mostly seen in American romantic drama films and is widely known for her effervescent persona. Throughout her career, she has managed to draw the attention of the critics and audiences alike due to her compelling screen presence and choice of films. As far as her personal life is concerned, she has been romantically linked with a number of co-stars and prominent personalities, including Carson Daly, Joey Lawrence, and Enrique Iglesias to name a few. American People
American Women
Texas Actresses
Pisces Actresses
American Actresses
Childhood & Early Life
Jennifer Love Hewitt was born on February 21, 1979, in Waco, Texas, United States, to Patricia Mae and Herbert Daniel Hewitt. She has an older brother named Todd Hewitt.
From a very young age, she was attracted to music, which led to her first encounter with showbiz. At the tender age of three, she performed ‘The Greatest Love of All’ in a livestock show.
By the time she was five, she began taking ballet and tap dancing lessons, and was made a member of the ‘Texas Show Team.’
She grew up in Nolanville, Central Texas. Her parents split when she was very young, post which she and her brother were raised under the care of their mother.
When she was ten years old, she won the ‘Texas Our little Miss Talent Winner’ title and decided to pursue a career in acting and singing.
She was soon seen as ‘Robin’ on Disney’s ‘Kids Incorporated’ and also performed in the television video ‘Dance! Workout with Barbie.’ Apart from acting, she also lent her voice for the video.
In 1992, she starred in her first feature film ‘Munchie,’ followed by ‘Little Miss Millions’ the subsequent year. She was cast as ‘Margaret’ in the film ‘Sister Act 2: Back in the Habit.’
She studied at ‘Lincoln High School’ in Los Angeles. While staying in Los Angeles, she was cast to play a role in the teen drama series ‘Party of Five,’ which first aired in 1994. 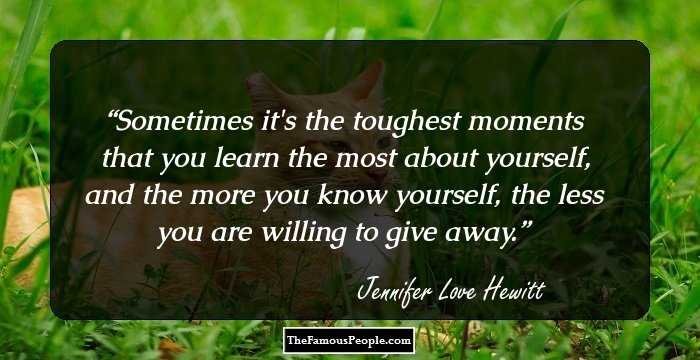 Quotes: You, Yourself
Continue Reading Below
Career
She starred in the teen drama ‘Party of Five,’ which was cancelled after six seasons. In 1994, she also appeared in 12 episodes of ‘The Byrds of Paradise’ and in four episodes of the series ‘McKenna.’
In 1996, she released her self-titled album, ‘Jennifer Love Hewitt.’ She then started hogging the limelight when she earned her first lead role in the American drama-horror film ‘I Know What You Did Last summer,’ which released in 1997.
The film went on to become so successful that it spawned a sequel titled ‘I Still Know What You Did Last Summer,’ which released in 1998. The same year, she starred in the high-school film ‘Can’t Hardly Wait.’ Around the same time, she reprised her role as ‘Sarah Reeves Merrin’ for the show ‘Time of Your Life.’
After establishing herself as a bankable star, she was cast in ‘The Audrey Hepburn Story’ in 2000. Apart from acting, she also co-executive produced the movie. The following year, she starred in the romantic comedy film ‘Heartbreakers.’ She followed it up with a voice-over role in the animated film ‘The Hunchback of Notre Dame II’ in 2002.
She released her fourth studio album ‘BareNaked,’ which went on to peak at 37th position on ‘Billboard 200’ in 2002.
In 2002, apart from lending her voice for animation films, she also appeared in ‘The Tuxedo’ alongside martial arts legend Jackie Chan.
In 2004, she starred in the critically-acclaimed film ‘If Only’ alongside Paul Nicholls. She co-wrote and sang two songs titled ‘Love Will Show You Everything’ and ‘Take My Heart Back’ which were part of the film’s soundtrack.
In 2004, she also starred in the live-action film ‘Garfield,’ which went on to become one of her highest-grossing films till date. Two years later, she reprised her role in the sequel ‘Garfield: A Tail of Two Kitties.’
She once again proved her mettle as an actor with the hit television series ‘Ghost Whisperer,’ which aired on ‘CBS’ network from 2005 to 2010. Apart from acting in the series, she also directed three episodes of the same. During this time, she was also seen in movies like ‘Delgo,’ ‘The Magic 7,’ and ‘Café.’
Continue Reading Below
She was cast in the television film ‘The Client List’ in 2010. The same year, she authored the book ‘The Day I Shot Cupid.’

In 2011, it was announced that she would debut as a feature film director for the film ‘Wait Till Helen Comes.’ However, the film was later directed by Dominic James. In 2011, she was seen in three episodes of ‘Hot in Cleveland’ where she played ‘Emmy Chase.’

In 2012, Jennifer Love Hewitt appeared alongside Joel David Moore and Ivan Sergei in the comedy film ‘Jewtopia.’ She was also seen in the television adaptation of ‘The Client List,’ which she also executive produced. 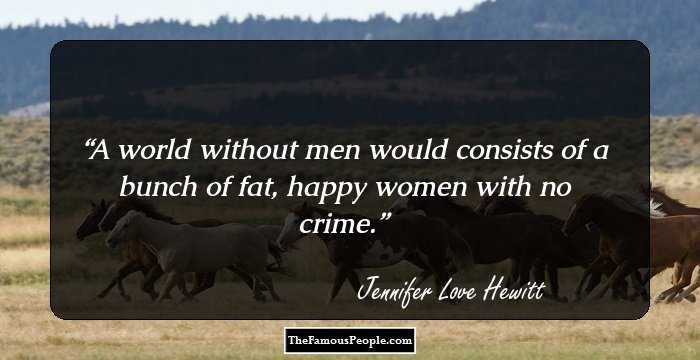 In 1997, Jennifer Love Hewitt was cast in the lead role in the film ‘I Know What You Did Last Summer.’ The movie went on to collect $125,586,134 at the box-office, becoming one of the most commercially successful films of the year. The film became extremely successful and also spawned a lesser-successful sequel ‘I Still Know What You Did Last Summer.’ In the film, which released in 1998, Hewitt reprised her role as ‘Julie James.’

She released her fourth studio album ‘BareNaked’ in 2002. The album was placed at number nine on the ‘Australian Top 100’ chart, and also peaked at number 37 on ‘Billboard 200.’ Two of the singles, ‘BareNaked’ and ‘Can I Go Now,’ became extremely successful.

From 2005 to 2010, she played the role of ‘Melinda Gordon’ in the hit supernatural drama ‘Ghost Whisperer,’ which aired on ‘CBS’ network. Playing the role of the lead protagonist, she earned rave reviews for her performance. The show became so popular that it spawned webisodes, reference books, novels, and a video game. The video game released in the early-2010s.

In 1994, Jennifer Love Hewitt won the ‘Young Artist Award’ for ‘Outstanding Youth Ensemble in a Cable or Off Primetime Series’ for ‘Kids Incorporated.’

She won the ‘Blockbuster Entertainment Award’ for ‘Favorite Female Newcomer’ for ‘I Know What You Did Last Summer’ in 1998.
In 2001, she was nominated for the ‘Teen Choice Award’ for ‘Film-Choice Actress’ for the film ‘Heartbreakers.’
She won the ‘Saturn Award’ under the ‘Best Actress on Television’ category for ‘Ghost Whisperers’ in 2008.
In 2011, she was nominated at the ‘Golden Globes’ for her role in the TV film ‘The Client List’ for ‘Best Performance by an Actress in a Miniseries or a Motion Picture Made for Television.’ 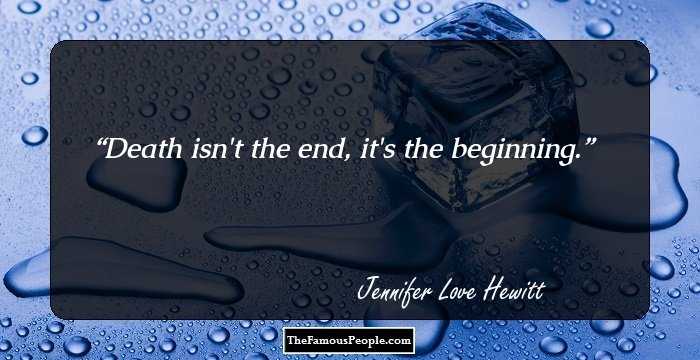 She dated actor Ross McCall in 2005, and the duo soon became engaged. However, they called off their engagement. She then began dating Jamie Kennedy before breaking up with him a year later.

Trivia
In an interview, this famous American actor claimed to have bejeweled her genitalia with Swarovski crystals. The same has been mentioned in a chapter in her book ‘The Day I Shot Cupid.’

Jennifer Love Hewitt and Steven Spielberg were stalked and threatened by a sedition theorist named Diana Napolis, who accused the actor and Spielberg of controlling her thoughts with cybertronic equipment. She also accused them of being a part of Satan’s conspiracy.