Jeffrey Lionel Dahmer was an American serial killer and a sex offender. Nurturing animal fascinations since childhood, he was always attracted by animal anatomy especially bones. Coming from a disturbed family, his youth was plagued by excessive drinking and drugging thereby making him a loner and giving rise to such instincts. Having committed heinous crimes, he is believed to be inflicted with necrophilia and came to known as the “Milwaukee Cannibal”. Abandoned by family for his weird habits and behavior, he resorted to such nerve wrecking practices. Exhibiting homosexual instincts, he is believed to have murdered and dismembered seventeen males in a span of 13 years; the majority of them being African-Americans. His residence housed the remains of the dead, packed and stored in jars and even in refrigerators. Evidences such as photographs of the victim and the murder scene prove schizotypal personality disorder in Dahmer. He was also held for child molestation cases but he managed to escape. In spite of exhibiting the traits of a psychotic disorder, he was not pitied upon and was declared sane and sentenced to fifteen terms of life imprisonment. Cary Stayner
DID WE MISS SOMEONE?
CLICK HERE AND TELL US
WE'LL MAKE SURE
THEY'RE HERE A.S.A.P
Quick Facts

Jeffrey Dahmer was born on May 21, 1960, to Joyce Annette and Lionel Herbert Dahmer in West Allis, Wisconsin.

Dahmer’s mother, a teletype machine instructor by profession and his father, a student of chemistry at the Marquette University, did not have a happy marriage, the effects of which were clearly evident in Dahmer’s behavior.

During his schooling at Revere High School, he was known to be a boy of an above average intellect. His interest in tennis was known, and he was also a part of the school band.

With his surgeries for hernias and the birth of his sibling, he became very insecure and became a shy and timid boy who had very limited friends.

He was always attracted by animals ever since childhood. He was reported to have captured insects and butterflies which he stored in jars. Fascinated by animal anatomy, he would store animal carcass which he dismembered to satisfy his curiosity.

Seeing his father clean the family home of animal bones, his interest gained momentum. He was ecstatic about the sound of bones.

Dahmer’s family shifted to Doylestown, Ohio, in 1966 and finally to Bath, Ohio, in 1968. Dahmer’s inquisitiveness regarding bleaching and preserving animal bones was very evident in the questions he kept throwing at his father, who was then working as an analytical chemist. 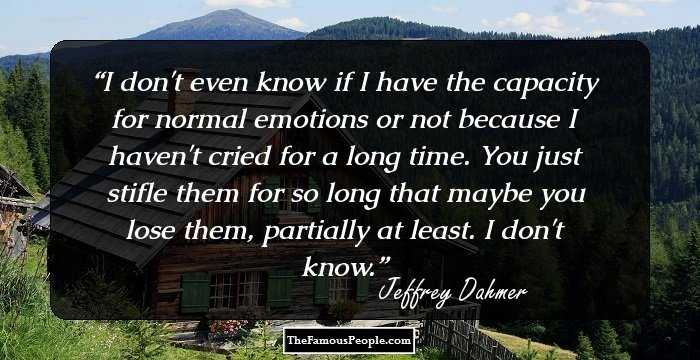 Quotes: You, Time, I
Continue Reading Below
Youth & Criminal Career
Post his graduation in 1978, Dahmer got addicted to alcohol due to which he had to give up his education at Ohio State University in 1979.
In the year 1978, he committed his first murder of a hitchhiker, Steven Hicks whom he took home, made him drink and hit his head with a barbell when he tried to escape. He stored his body in plastic bags after dismembering it.
On his father’s recommendation, he joined the Army in 1978 and moved to Germany. His alcoholism couldn’t take him further in the Army too and he was discharged in 1981.
His unruly behavior landed him in prison a couple of times, because of which he was sent to live with his grandmother in Wisconsis who also could not take his habits and threw him out in September, 1988.
Dahmer’s second victim, Steven Toumi was murdered in a hotel room post drinking whose corpse was moved to his grandmother’s basement in a suitcase. It is believed that Dahmer sexually abused the body before dismembering; although the body was never discovered.
Just two months later Dahmer lured another 14 year old male prostitute, James Doxtator into his residence with the usual ulterior motives. After some sexual activities the victim was drugged and killed.
Post this, Dahmer set out on a killing spree that continued for almost 13 years wherein he usually targeted African-American men.
His victims were first taken to a drunken state and killed, after which he used to have sex with their dead bodies.
He used to store the victim’s genitals and skulls as remembrances. He would put the victim’s head in the refrigerator and later treat with bleach.
Continue Reading Below
His house would stink of the remains of the dead and neighbors also complained of weird sounds that came from his apartment but he always got away with excuses.
For Dahmer, murdering was an experience which was evident by the photographs he clicked at various stages of murder.
He was accused of child molestation in 1989, which was defended by his counsel on grounds of seeking medical help for him. Although he escaped with a “day release” and five year probation, he showed no change in attitude.
In the next 15 months, he committed 12 more murders. He became a Necrophilia wherein he dominated the victims. He also became a flesh eater, drilled into living victim’s skulls and discovered new ways of disposing bodies.
Dahmer was smart in selecting his prey. He chose criminals of lesser degree whose sudden absence from society was less perceptible.
It was on July 22, 1991, that Dahmer failed to escape when Tracy Edwards, an African-American man was found handcuffed in a drugged state on the streets. Going by the victim’s claims, the police searched Dahmer’s apartment where all evidences included heads, skulls, dismembered bodies, preserved genitals were found.
Dahmer confessed of his gruesome acts but his defence counsel pleaded mercy on the grounds of insanity which was not taken by the jury.
On February 17, 1992, Dahmer was declared guilty but sane and sentenced to 15 consecutive life terms or 957 years of imprisonment. 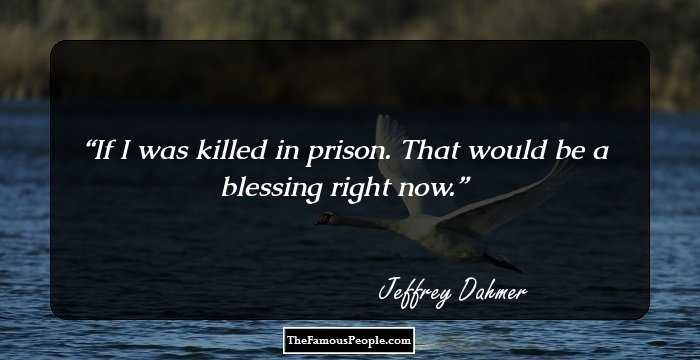 Quotes: I
Family & Personal Life
Dahmer had homosexual orientations, which he always hid from his parents.
While in prison, he was secluded from other inmates, but he easily adjusted to the way of living in prison.
He was permitted by the Columbia Correctional Institution to be baptized by a local preacher.
For the first time on November 28, 1994, he was allowed the company of other inmates - Jesse Anderson (a murderer) and Christopher Scarver (a schizophrenic, imprisoned for life for murder). He was killed by Christopher Scarver, who crushed his head with a metal bar.
Almost 20 years after Dahmer’s death in 2015, Christopher Scarver revealed his loath for Dahmer’s criminal record and his provocative behavior with other inmates as being the reasons behind murdering him.

Quotes By Jeffrey Dahmer | Quote Of The Day | Top 100 Quotes

See the events in life of Jeffrey Dahmer in Chronological Order