Jay Mohr is an American comedian, actor as well as a radio host, popularly known for his portrayal of Professor Rick Payne in the TV series ‘Ghost Whisperer’ between 2006 and 2008. He made his film debut in 1996, appearing as an opportunist sports agent named ‘Bob Sugar’ in the film ‘Jerry Maguire’ and has since appeared in many movies and TV series. Jay earned a lot of fan following after he appeared in the CBS sitcom ‘Gary Unmarried’ as the title character. He has worked in many hit films including the likes of ‘Picture Perfect’, ‘Suicide Kings’ ‘Seeing Other People’, ‘Are We There Yet?’, ‘King's Ransom’, and ‘Lonely Street’. Jay runs his own podcast ‘Mohr Stories’ on the ‘SModcast’ Network and in the past, he had also hosted the daily midday sports radio talk show ‘Jay Mohr Sports’ on Fox Sports Radio, which was very popular among the viewers. Even though he is a highly successful professional actor and comedian today, he has been through his own shares of struggles and challenges. He credits comedian and actress Sarah Silverman for helping him cope with his professional struggles. 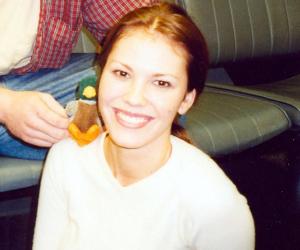 Ezra Miller
Actors #1971
Film & Theater Personalities #4167
Continue Reading Below
DID WE MISS SOMEONE?
CLICK HERE AND TELL US
WE'LL MAKE SURE
THEY'RE HERE A.S.A.P
Quick Facts

American People
New Jersey Actors
Virgo Actors
American Actors
Actors Who Are In Their 50s
Childhood & Early Life
Jon Ferguson Mohr was born in Verona, New Jersey on August 23, 1970. His mother Iva Jean was a nurse and his father Jon Wood Mohr worked as a marketing executive. Jon is of mixed German, English, Welsh and Scottish ancestry. He has two sisters named Julia and Virginia, both older than him.
Continue Reading Below
You May Like

Famous Beautiful Women With Green Eyes
Career
Jay Mohr, as he became known professionally, first appeared as a featured player on the variety TV show ‘Saturday Night Live’ during the 1993-94 and 1994–95 seasons. However, life wasn’t very pleasant for him at that time; he suffered from chronic panic attacks and constantly found life to be a struggle.
He struggled to go to work and always felt anger inside him. His co-star Sarah Silverman helped him greatly in those days and he acknowledged that fact along with his struggles in his memoir, ‘Gasping for Airtime: Two Years in the Trenches of Saturday Night Live’.
Jay Mohr started his film career with a role in the movie ‘Jerry Maguire’ in 1996. He played the role of a backstabbing sports agent ‘Bob Sugar’, who would go any distance to keep his own pocket full. His performance was praised by the critics, and three years later he appeared in a very important role in the film ‘Picture Perfect’.
He played the same kind of a sleazy character as of ‘Bob Sugar’ in the television series ‘Action’. He was offered a late night talk show to host by Michael Eisner which he declined because of not being sure. Later the show was offered to Jimmy Kimmel and titled as ‘Jimmy Kimmel Live!’ Following the success of this show, Jay regretted the missed opportunity and convinced Eisner into offering him another talk show on ESPN, ‘Mohr Sports’, which was later canceled after running briefly in 2001.
Over the ensuing years Mohr appeared in many films including Clint Eastwood’s thriller ‘Hereafter’. His other notable films include ‘Suicide Kings’, ‘Are We There Yet?’, ‘Small Soldiers’, ‘Go, Pay It Forward’, ‘The Groomsmen', ‘Lonely Street’, and ‘King's Ransom’. He also played the title character in the CBS sitcom ‘Gary Unmarried’ alongside Paula Marshall.
Major Works
One of Jay Mohr’s career highlights was creating and hosting the NBC's reality television show ‘Last Comic Standing.’ He was the executive producer of the show and hosted it for two seasons in 2003 and 2004. Unfortunately, during the end of the third season, NBC decided to shelve the show due to bad ratings. Mohr was critical about the decision and expressed his disappointment publicly. Later the show was renewed but Mohr decided against hosting it.
Awards & Achievements
Jay Mohr won a Teen Choice Award nomination for his role in ‘Go’ in 1999.
For his portrayal of ‘Peter Dragon’ in ‘Action’ (1999-2000), he won the Golden Satellite award.
As an executive producer of the comedy show 'Last Comic Standing’, he won a Primetime Emmy nomination.
Jay’s album ‘Happy. And A Lot’ whose contents were written by his wife, was nominated for the Grammy Award for Best Comedy Album at the 58th Annual Grammy Awards.
Personal Life
Jay Mohr married former model Nicole Chamberlain in 1998. Together they have a son, Jackson. The marriage, however, did not last long and ended in a divorce in 2004.
Two years later he married actress Nikki Cox on December 29, 2006. The couple had first met on the sets of the television show ‘Las Vegas’. He legally changed his name to Jon Ferguson Cox Mohr, adding Nikki’s surname.
The couple welcomed their first child, son Meredith Daniel Mohr on May 5, 2011. However, their marriage hit the rocks after a few years. Jay admitted during ‘The Adam Carolla Show’ on May 16, 2017, that the couple is heading for a divorce.
Trivia
He is popular for his impersonations of celebrities like Sean Penn and Christopher Walken.
He is the brother-in-law of Matthew Cox.
He is the brother-in-law of Matthew Cox.

See the events in life of Jay Mohr in Chronological Order