Joseph Jason Namakaeha Momoa is an American actor, model, and producer, who rose to fame with his long-running roles in the television series Baywatch Hawaii and Stargate: Atlantis. His performance as Khal Drogo in the TV series Game of Thrones further increased his popularity and took his career to the next level, drawing the attention of producers and mainstream audiences. He began his career as a model before venturing into acting. He was discovered by international fashion designer Takeo, who encouraged him to pursue a modelling career. Due to his good looks and attractive physique, he was soon at the peak of his modeling career and was also named Hawaii's Model of the Year. He walked the ramp at several prestigious fashion shows prior to taking up acting roles. In acting, his title role in the film Conan the Barbarian opened doors for more film roles, making him a busy actor. In 1999, he bagged a lead role in Baywatch Hawaii, which he earned after beating about thousand other actors who had auditioned for the role. After the show ended in 2001, Momoa took a break from work to travel the world. It was during this time that he discovered Buddhism on a trip to Tibet. He eventually returned to the world of acting and is currently busy with his upcoming projects. Evan Peters
1st August In History
DID WE MISS SOMEONE?
CLICK HERE AND TELL US
WE'LL MAKE SURE
THEY'RE HERE A.S.A.P
Quick Facts

Joseph Jason Namakaeha Momoa was born to Coni, a photographer, and Joseph Momoa, a painter, on August 1, 1979, in Honolulu, Hawaii. The only child of his parents, he was raised in Norwalk, Iowa, by his mother.

He studied marine biology during his college days in Iowa. Later he attended the Colorado State University and changed his major to wildlife biology.

He traveled extensively since he was young. He learned pastel painting in Paris and was introduced to the tenets of Buddhism in Tibet. 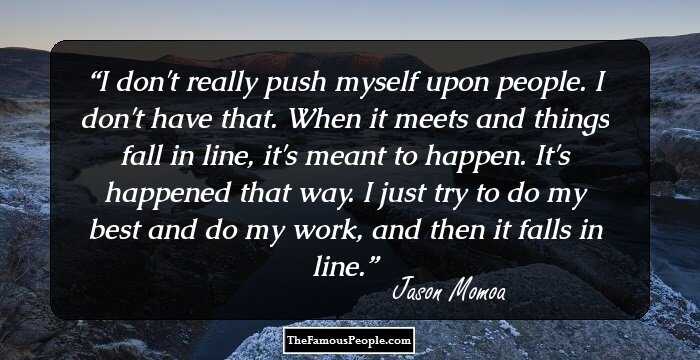 Jason Momoa was discovered by international fashion designer Takeo Kobayashi in 1998. Kobayashi encouraged the young man to take up modeling. Momoa did so and won Hawaii's Model of the Year 1999. He also proceeded to host the Miss Teen Hawaii contest.

In 1999, he landed the role of “beach dude” Jason Ioane in the action drama television series Baywatch Hawaii. He was a regular in the show for two seasons and appeared in all 38 episodes. This was his first onscreen role. The show ended in 2001.

In 2003, he reprised the role of Jason Ioane in the television film Baywatch: Hawaiian Wedding. In the same year, he appeared as Kala in another television movie called Tempted.

In 2004, he debuted in Christopher Erskin’s film Johnson Family Vacation. In the same year, he landed Frankie Seau’s role in North Shore, in which he was a regular for 21 episodes.

His popularity was further boosted when he landed the role of Ronon Dex in the military science fiction television series Stargate: Atlantis in 2005, for which he had to learn martial arts. Based on the 1994 feature film Stargate, all the five seasons of Stargate: Atlantis were aired on Sci-Fi Channel in the United States. The series ended in 2009.

His character Ronon Dex donned signature dreadlocks which were quite heavy. As the dreadlocks were giving him headaches and neck pain, he took permission from the producers to cut off the locks before season five began.

The producers decided to keep the character with the dreads and sewed them on his hair for the first three episodes. However, when it became a nine-hour task and too painful for Momoa, they decided to do away with the locks. Eventually, he started wearing a wig with the dreads stitched on it, and finally, a customised wig was made for him.

As soon as Stargate: Atlantis concluded, he was cast as Roman in four episodes of the comedy drama series The Game in 2009.

His next breakthrough character was of Khal Drogo in the television series Game of Thrones in 2011 on HBO. He played the character of a barbarian leader of the Dothraki tribe. As the show became an instant hit, Momoa gained even more fame for his portrayal of the violent tribal leader. He picked up the CinemaCon Award for Male Rising Star and a nomination each for Scream Award for Best Ensemble and Screen Actors Guild Award for Outstanding Performance by an Ensemble in a Drama Series.

In 2014, he directed, co-wrote, and starred in the thriller film Road to Paloma. The film, which also starred Sarah Shahi, Lisa Bonet, Michael Raymond-James and Wes Studi, was premiered at the 2014 Sarasota Film Festival.

From 2014 to 2016, he continued with his television work, starring in the Sundance Channel drama The Red Road followed by Drunk History, where he played the roles of pirate Jean Lafitte as well as the athlete Jim Thorpe.

He played the superhero Aquaman in the 2016 film Batman v Superman: Dawn of Justice. In the same year, he played Miami Man, a cannibal, in the thriller film The Bad Batch, written and directed by Ana Lily Amirpour. He also portrayed Joe Bright in another thriller film Sugar Mountain, directed by Richard Gray and written by Abe Pogos.

He was featured in 12 episodes of the television series Frontier in 2016. He was also the executive producer of the series. His performance as Declan Harp was critically acclaimed and he was nominated for the Canadian Screen Award for Best Performance by an Actor in a Leading Dramatic Role.

In 2017, he was seen in two films—Once Upon a Time in Venice and Justice League, where he once again portrayed the role of Aquaman. In 2018, he was seen in Lin Oeding’s movie Braven. 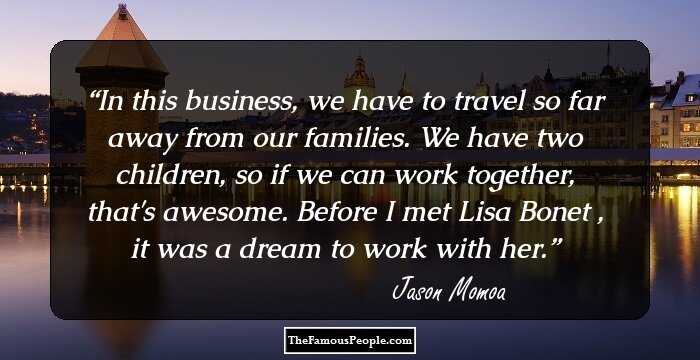 Jason Momoa played the fictional character of Ronon Dex in the series Stargate Atlantis. Created by Brad Wright and Robert C. Cooper, the show became an immediate hit, and his character became famous for his brilliant performance and his signature dreadlocks. The series received good ratings and was more popular in Europe and Australia. It earned several awards and nominations in its five-season run.

Jason Momoa started dating actress Lisa Bonet in 2005. On July 23, 2007, their daughter, Lola Iolani Momoa, was born. Their son, Nakoa-Wolf Manakauapo Namakaeha Momoa, was born on December 15, 2008. The couple got legally married in October 2017. Momoa and Bonet announced their separation in January 2022. The same year he started dating Eiza González. In June 2022, the couple announced their separation.

In December 2017, Momoa was featured on the Men's Health magazine. He talked about his fitness routine in an article.

A scar on his face, which is visible in his later works, was acquired in a fight at the Bird Café in Hollywood on November 15, 2008, when a man slashed his face with a broken beer glass. He was seriously injured and received 140 stitches. 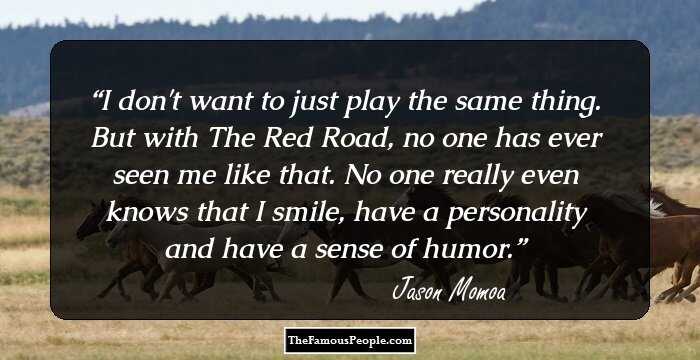 Quotes By Jason Momoa | Quote Of The Day | Top 100 Quotes

See the events in life of Jason Momoa in Chronological Order