Jason Kent Bateman is an American actor who became famous as a teen actor during the 1980s. He first displayed his acting skills playing the role of ‘Derek Taylor’ in the sitcom television series ‘Silver Spoons.’ He then landed the recurring role of ‘David Hogan’ in the series ‘Valerie,’ which was renamed as ‘The Hogan Family.’ Following the conclusion of ‘The Hogan Family,’ he landed roles in unsuccessful sitcoms such as, ‘Simon,’ ‘George and Leo,’ ‘Chicago Sons,’ and ‘Some of My Best Friends.’ After playing a supporting role in the romantic comedy film ‘The Sweetest Thing,’ he was offered the lead role in the sitcom ‘Arrested Development.’ Acclaimed for its smart humor and fresh concept, the show became a hit with critics and viewers. Since then, he has acted in a host of comedies, such as ‘Juno,’ ‘Extract,’ ‘Couples Retreat,’ ‘The Switch,’ and ‘Identity Thief.’ He has also delivered sterling performances in movies like ‘Hancock,’ ‘The Kingdom,’ and ‘Disconnect.’ He has also directed a couple of movies. Having fought against his drug and alcohol addiction, Jason Bateman serves as an inspiration to many aspiring actors and young people. American People
Directors
American Men
New Yorkers Actors
Capricorn Actors
Childhood & Early Life
Bateman was born on January 14, 1969, in Rye, New York, USA, to Elizabeth, a former flight attendant, and Kent Bateman, an actor, writer, and director. His father is also the founder of a repertory stage in Hollywood.
He has an older sister named Justine, and three half-brothers. When he was four years old, his family moved to Salt Lake City, Utah, and later to California. At 10, he began to act professionally and started working in commercials.
Bateman did not complete high school studies. 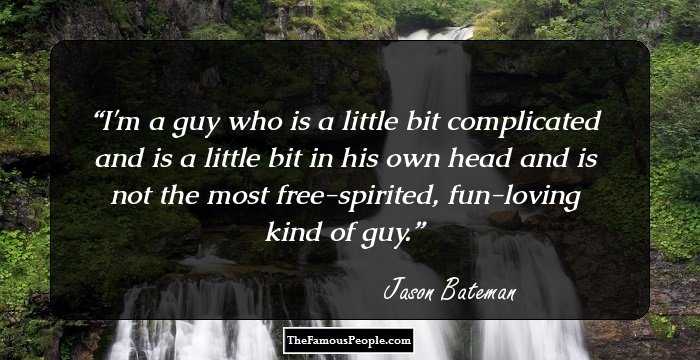 Continue Reading Below
Career
Bateman started his television career in 1981 with a recurring role in ‘Little House on the Prairie.’ In the series, he played ‘James Cooper,’ an orphaned boy who, along with his sister, is adopted by the Ingalls family.
From 1982 to 1984, he played Rick Schroder's scheming school friend in the sitcom ‘Silver Spoons.’ His good looks and sense of humor made him popular among teenage girls.
He appeared in a 1984 episode titled ‘Lost Knight’ from the series ‘Knight Rider.’ Three years later, he appeared alongside Burt Reynolds in the inaugural week of the game show ‘Win, Lose or Draw.’
Between 1995 and 2001, he had major roles on four series—‘Simon,’ ‘Chicago Sons,’ ‘George and Leo,’ and ‘Some of My Best Friends’—none of which lasted longer than a season.
In 2002, he played the frisky sibling of Thomas Jane's character in ‘The Sweetest Thing,’ a romantic comedy film directed by Roger Kumble. The film starred Cameron Diaz, Christina Applegate, and Selma Blair.
After tasting success with the television series ‘Arrested Development,’ he landed small roles in movies, such as ‘Dodgeball: A True Underdog Story,’ ‘Starsky and Hutch,’ ‘The Break-Up,’ and ‘Smokin' Aces.’
In ‘The Kingdom,’ a 2007 action film, he played ‘Special Agent Adam Leavitt.’ The film also starred Jamie Foxx, Chris Cooper, Jennifer Garner, and Ashraf Barhom.
He had a supporting role in the 2007 comedy drama ‘Mr. Magorium's Wonder Emporium’ where he played ‘Henry Weston,’ a straight-laced and rigid accountant. Dustin Hoffman and Natalie Portman also starred in the movie.
For his performance in ‘Juno,’ a 2007 comedy-drama film, Bateman was nominated for a ‘Critics' Choice Award.’
Continue Reading Below
In ‘Hancock,’ a 2008 superhero film starring Will Smith, Charlize Theron, and Eddie Marsan, he had a significant role as ‘Ray Embrey,’ a corporate public relations consultant whose life is saved by Hancock.
He lent his voice for the short-lived 2009 ‘Fox’ animated comedy series ‘Sit Down, Shut Up.’ He voiced ‘Larry Littlejunk,’ a gym teacher and only staff member that can teach.
‘Extract,’ a 2009 comedy film directed by Mike Judge, starred Bateman alongside Mila Kunis, Kristen Wiig, Dustin Milligan, J. K. Simmons, and Ben Affleck. The film was a moderate success.
‘Couples Retreat,’ a 2009 romantic comedy film, saw him sharing screen-space with Vince Vaughn and Favreau. The movie was filmed mostly in Bora Bora, an exotic resort in French Polynesia.
In 2010, he starred alongside Jennifer Aniston in ‘The Switch,’ a romantic comedy. Even though it received mixed to lukewarm reviews from critics, the movie proved to be a moderate financial success.
In 2011, he played the role of ‘Special Agent Zoil’ in the comedy film ‘Paul.’ He also starred in ‘Horrible Bosses’ and in the fantasy comedy ‘The Change-Up.’ The latter received criticism for its crude humor.
He starred in ‘Disconnect,’ a 2012 thriller film directed by Henry Alex. The film explores how people experience the negative side of modern communication technology.
‘Identity Thief,’ a 2013 crime comedy film directed by Seth Gordon, starred Bateman alongside Melissa McCarthy. The film narrates the story of a man (Bateman) whose identity is stolen by a woman (McCarthy).
‘Bad Words,’ a black comedy film, marked his directorial debut. The film had its world premiere as part of the ‘Special Presentation’ section at the ‘Toronto International Film Festival’ in 2013.
Continue Reading Below
He reprised his role as ‘Nick Hendricks’ in the movie ‘Horrible Bosses 2’ in 2014.
In 2016, Bateman voiced ‘Nick Wilde,’ a cunning fox, in the animated film ‘Zootopia.’
He was cast in the 2018 black comedy film ‘Game Night’ alongside Rachel McAdams. 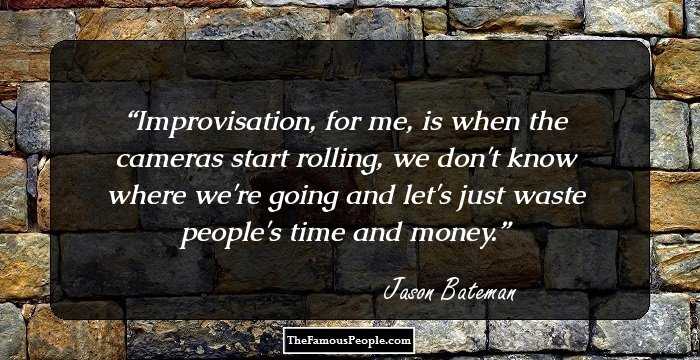 Major Works
‘The Hogan Family,’ an American television comedy that aired on NBC and CBS for six seasons from 1986 to 1991, made Bateman a teen idol.
He was cast as ‘Michael Bluth’ in the critically acclaimed comedy series ‘Arrested Development’ which aired from 2003 to 2006. Though the series did not become a commercial hit, Bateman won several accolades for his performance.
Awards
Bateman won three awards in 2005 for his performance in ‘Arrested Development’—‘Golden Globe’ for ‘Best Performance by an Actor in a Television Series - Musical or Comedy’ and two ‘Satellite Awards.’
He won the ‘Annie Award’ for ‘Outstanding Achievement, Voice Acting in an Animated Feature Production’ for ‘Zootopia’ in 2016.
In 2019, he won the ‘Primetime Emmy Award’ for ‘Outstanding Directing for a Drama Series’ for ‘Ozark.’ 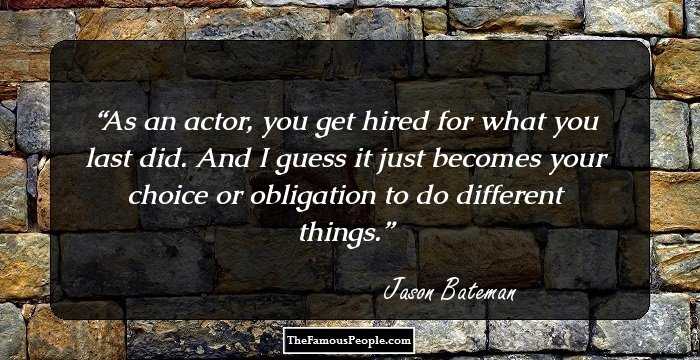 Personal Life & Legacy
Bateman married Amanda Anka, the daughter of singer Paul Anka, in 2001. They live in Los Angeles, California, along with their two daughters: Francesca Nora and Maple Sylvie.
This actor fought against his drug and alcohol addiction when he was in his 30s. He had a minor health scare in 2005 and underwent a throat surgery to remove a benign polyp.
Trivia
This actor’s film company is called ‘F+A Productions,’ named after his daughter Francesca and wife Amanda. His wife Amanda also started a production company called ‘DumbDumb.’
When asked about his New Year resolution, Bateman stated “I don't have anything to fix! I don't smoke, I don't drink, and I don't eat carbs. My life is just great now…Vanilla.”
He is an avid fan of professional baseball team ‘Los Angeles Dodgers.’

Quotes By Jason Bateman | Quote Of The Day | Top 100 Quotes

See the events in life of Jason Bateman in Chronological Order