Jane Seymour’s name is synonymous with class, elegance and magnificence. Movie-goers remember her role as the foxy vixen, ‘Solitaire’ in the quick-paced James Bond classic, ‘Live and Let Die’. A ballet buff, Seymour has grown to become one of the most admired television and film actresses in Hollywood and around the world. Her USP lies in the fact that the roles she chooses are just as stimulating and numinous as her magnetic personality. From playing Bond’s love interest to the quirky, provocative Dr. Quinn in ‘Dr. Quinn: Medicine Woman’, she has gone from being a simple girl with simple ballet dreams to becoming the reigning queen of Television movies in the 20th century. Although her professional life was fruitful, her personal life was not that rosy. She has been married four times and has faced several personal tragedies in her family. Never one to ease off on the work front, her first publication, ‘Jane Seymour’s Guide to Romantic Living’ went on to become an international best-seller and she soon went on to publish a series of other successful children’s books. Whilst still acting, she also devotes a considerable amount of time to painting and also to her growing fashion empire. American People
British People
American Women
British Women
Taurus Actresses
British Actresses
Childhood & Early Life
Actress Jane Seymour was born Joyce Penelope Wilhelmina Frankenberg to John Benjamin Frankenberg and Mieke van Trigt, in Hayes, Middlesex, England. She is of Polish-English descent and was always engaged in creative pursuits from a very tender age.
She was educated at the Arts Educational School in Hertfordshire, England and took ballet lessons to improve posture and endurance. She trained for a brief period of time at the Arts Educational Trust for dance and also trained under the famous Russian Ballet dancer, Kirov Ballet. However, a grievous injury on her foot put an end to her dancing career.
Her exotic looks earned her an uncredited part in Richard Attenborough’s 1969 film adaptation of Charles Chilton’s play, ‘Oh! What a Lovely War’. 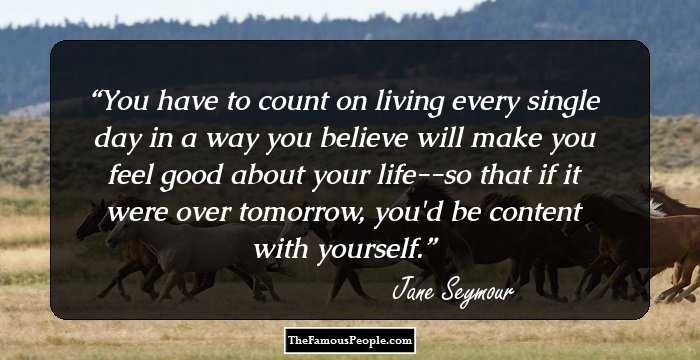 Quotes: You, Life, Yourself, Will, Believe, Happiness, Living
Continue Reading Below
Career
She appeared in her first major film, ‘The Only Way’, in 1970. In this film, she played the role of a Jewish woman seeking shelter from Nazi persecution
In 1973, she played ‘Emma Callon’ in the hit-television series, ‘The Onedin Line’, which ran for a couple of years. During this time, she also appeared as the female lead, ‘Prima’ in the mini-series, ‘Frankenstein: The True Story’.
Towards the end of 1973, she achieved critical fame for her role of ‘Solitaire’ in the blockbuster James Bond hit, ‘Live and Let Die’, which catapulted her to instant stardom.
In 1975, she was cast as ‘Princess Farah’ in ‘Sinbad and the Eye of the Tiger’, the final part of the Sinbad Trilogy. The film released in 1977 only after all the stop motion animation sequences were complete.
The following year, she played ‘Serina’ in the Battlestar Galactica film and the television series adaptation of the same.
In 1980, she returned to the big screen with the comedy film, ‘Oh Heavenly Dog’, in which her performance was appreciated by critics.
Her next film, ‘Somewhere in Time’, released in 1980, fared poorly in theaters at the time of its release. However, it gained a devoted cult following, even spawning a yearly pilgrimage to the site of the Victorian era hotel where this epic love story was filmed.
She soon began appearing in roles based on several works of literature and worked in classics like, ‘The Scarlet Pimpernal’, ‘The Phantom of the Opera’ and ‘Lassiter’.
In 1988, she was cast in the World War II epic, ‘War and Remembrance’, which was an adaptation of Herman Wouk’s ‘Winds of War’.
Continue Reading Below
In the early 1990s, she became the reigning queen of Television movies and played wide-ranging roles, from a damsel-in-distress to an attractive seductress. It was during this time, she worked closely with the actor/director James Keach, who would later become her husband.
She broke away from her damsel-in-distress roles and opted to star in a career-defining TV series, ‘Dr Quinn: Medicine Woman’, which aired from 1993 to 1998. This series kept the audience invested over the course of six seasons.
During this exceptionally productive period, she faced tragedies in her personal life, which led her to co-author her first of several children’s books titled, ‘Yum! A Tale of Two Cookies’ in 1998. She then appeared in telepics like ‘Dr. Quinn’ TV series viz., ‘Dr. Quinn Medicine Woman: The Movie’ and ‘Dr. Quinn, Medicine Woman: The Heart Within’, which released in 1999 and 2001 respectively.
In the beginning of 2004, she was cast as ‘Genevieve Teague’ in the famous pre-Superman series, ‘Smallville’. She once again took a break from television and began appearing in movies like ‘Wedding Crashers’, which released in 2005.
She appeared in the small television comedy series, ‘Modern Men’. She soon began appearing on a number of reality shows from 2009 to 2011 including ‘Iron Chef America: The Series’ and ‘Dancing with the Stars’.
She also appeared in a couple of episodes of the hit-American series, ‘Castle’. On the big screen, she played the role of Mandy Moore’s mother in the rom-com, ‘Love, Wedding, Marriage’, released in 2011. 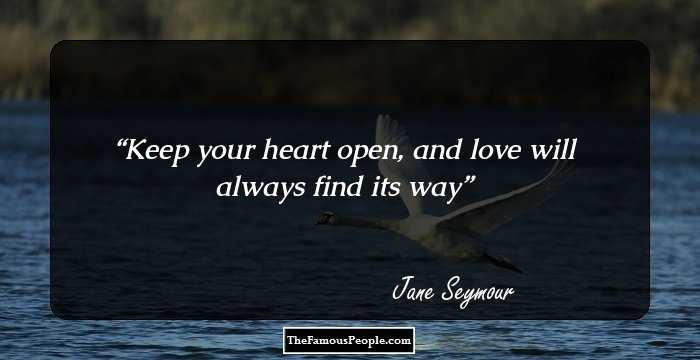 Quotes: Love, Will, Heart
Major Works
Her role as ‘Solitaire’, the stunningly beautiful Bond girl, was a career-defining one and landed her a number of films and gathered a cult following. She was ranked no. 10 in IGN’s list of ‘Top 10 Bond Babes List’ and she was guaranteed a permanent spot in Hollywood following the success of the movie.
In the 1990s, she earned popularity and critical acclaim as ‘Dr. Mike Quinn’ in the popular television series, ‘Dr. Quinn: Medicine Woman’. Her work not only littered her with several major Hollywood projects but also earned her a Golden Globe Award.
Continue Reading Below
Awards & Achievements
She won the Golden Globe Award for ‘East of Eden’, in 1981.
She was the recipient of the Golden Globe Award for ‘Dr. Quinn: Medicine Woman’, in 1993.
In 2000, she was officially made the Officer of the Order of the British Empire and also received the Ellis Island Medal of Honor in 2010.
Personal Life & Legacy
Jane Seymour married four times and all her relationships were extremely brief.
Her first marriage to Michael Attenborough lasted from 1971 to 1973.
She married Geoffrey Planer in 1977 but it did not last long and the couple divorced in 1978.
In 1981, she married David Flynn, her third husband, and the couple had two children. They got divorced in 1992.
In 1993, she married James Keach, with whom she had twins. In April 2013, the couple announced their separation.
Currently, Seymour is the ambassador for ‘Childhelp’ a non-profit organization, dedicated to helping victims of child abuse.
Apart from acting, she is also focused on expanding her clothing line, the ‘Jane Seymour Collection’.
Trivia
This Bond girl’s house was used for the recording of ‘Radiohead’s’ single, ‘OK Computer’.
This famous actress and Bond girl suffers from Heterochromia - her right eye is brown whereas her left eye is green.

See the events in life of Jane Seymour in Chronological Order