Famous as: General President of the International Brotherhood of Teamsters 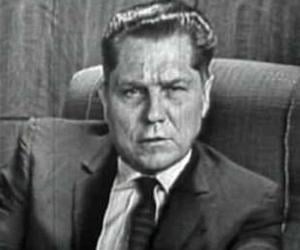 James P. Hoffa is an American attorney, best known as the incumbent general president of the International Brotherhood of Teamsters. Born to Jimmy Hoffa, the former general president of the Teamsters, James was raised in an upper-middle-class family. Following his high-school graduation, he earned an economics degree and a law degree from the University of Michigan and ended up working as an attorney with Teamsters. In the late 1990s, he was elected as the president of the Teamsters. He continues to serve in the position to this day, after being re-elected five times so far. One of the main reasons for his popularity is his constant drive to work for union members such as the carhaulers, airline workers, and drivers. He ensured the ratification of many contracts that benefitted the workers directly. He also led his workers to strike against various government trade policies. Many successful protests over the years led to the Teamsters emerging as a powerful political force. He endorsed Barack Obama during the 2008 general elections and remained a great admirer of his policies throughout his 8-year tenure. James Phillip Hoffa was born on May 19, 1941, in Detroit, Michigan, U.S., to Jimmy and Josephine Hoffa. He happened to be the only son in the family and grew up with a sister named Barbara. His father was the president of the International Brotherhood of Teamsters, which was a labor union mainly operating in the U.S. and Canada.

James spent most of his childhood attending the Teamster meetings that were held at his place, owing to his father being the president of the union.

James inherited exceptional leadership qualities from his father and exhibited them during his high-school years. He attended the Cooley High School and became a key member of the National Honor Society. Apart from being good in academics, he also excelled in extracurricular activities. He played football and even made it to the school-level and then the state-level football teams.

He was quite close to his father and accompanied him to his Teamster meetings. In the summers, the family used to spend their holidays in a cottage in Detroit. James spent most of his childhood in an upper-middle-class setting and concentrated on his academics. He intended to study law in future.

At 18, as soon as he completed his high-school graduation, he became a member of the Teamsters. Around the same time, he joined the Michigan State University, where he studied economics. He later attended the University of Michigan Law School and obtained a Bachelor of Law degree.

After gaining a Ford Foundation Fellowship, he began working at the Michigan State Senate and also began his stint as an attorney.

In 1968, soon after graduating from the University of Michigan Law School, James P. Hoffa began working with the Teamsters as their attorney. He stayed in the position until the mid-1990s.

By 1996, he had decided to follow in his father’s footsteps to take over the leadership of the union. He ran a campaign against the then-incumbent president, Ron Carrey. He officially announced his candidacy during the Teamsters International Convention in 1996.

Out of more than a million members of the union, about half a million cast their vote. With 52 percent of the total votes cast in his favor, Cory was elected as the Teamsters president in November 1996. James lost his first presidential bid. However, it was discovered that the elections had not been fair. Thus, a new date was set for the re-elections in 1998. A team of investigators also found out that the Teamster assets were being improperly used.

According to the federal government orders, a deep investigation into the matter ensued. Many other irregularities were found in the account books, further establishing the fact that Cory had been a dishonest and corrupt man and was thus unfit for handling the top position within the organization.

Cory was forced to resign. The re-elections took place in 1998. James had turned out to be the favorite when compared to his main competitor, Tom Leedham. Tom was the leader of Teamsters Warehouse Division, while James had his father’s legacy as his main advantage. James won the elections, and the members knew that it was a chance to rebuild what was lost in the union.

The main job of the Brotherhood was to represent a huge number of blue-collar and professional workers engaged in the private and the government sectors. The union had more than a million members in the late 1990s, when James took over as its president.

One of his first main jobs came to him in 1999, when he had to ratify a contract that involved about 13,000 carhaul workers. James was under immense pressure to make that happen, as the carhaul workers had been calling the office a thousand times and were rallying on the streets, too. According to the new contract, the carhaul members would not engage in a nationwide strike. In turn, they would receive benefits such as job security, significant salary increases, and pension gains.

James P. Hoffa put pressure on the United Parcel Service, which helped in the creation of 2,000 jobs. They were bound to fulfil their promises according to the 1997 contract. He also stated that any delay or manipulation of numbers would not be tolerated at any cost.

In the early 2000s, the Teamsters further initiated the ratification of contracts that involved about 8,000 Northwest Airlines flight attendants and thousands of casino workers in Detroit. The companies and their workers were happy with the new leadership, and as a result, many flight attendants from Champion Air ended up voting for a contract with the Teamsters. This association helped them greatly in achieving better compensation, working conditions, and other benefits.

Mechanics working at Continental Airlines, along with the 65,000 drivers under the union, also benefitted a great deal from the new leadership. Moreover, a new contract was drawn up by the carhaulers, as their wages were increased by about 13 percent. In addition, the workers also received good healthcare plans along with pension benefits.

Over the years, the Teamsters undertook many such operations, and as a result, James became known as an impeccable leader. President George W. Bush put James on the Advisory Committee for Trade Policy and Negotiations.

By the early 2010s, James had made a name for himself by endorsing fair trade and worker safety, and as a result of this hard work and sincerity, he was re-elected five more times throughout his tenure.

Under his presidency, the union grew in numbers and came ahead as a strong political game-changer. The union members fiercely opposed a U.S. trade deal with Colombia and protested on the streets against the same. The deal was hence canceled. A U.S. deal with Panama met with the same fate.

In 2005, the Bush administration brought a new law that increased the working hours of drivers. The Teamsters protested, saying that it would contribute to driver fatigue. Eventually, the Barack Obama administration took back the new set of guidelines.

In September 2011, he was dragged into a a controversy when he delivered a fiery speech during a rally while introducing President Barack Obama. The opposition said that it was violence-inducing and questioned Obama’s silence regarding the speech. It was a key point of discussion and arguments on many media portals.

He is currently regarded as one of the most dynamic and bright leaders in the trade union industry in America and continues to oppose government policies and strengthen laborers and workers.

In 2020, he stated he was nearing the end of his term as the president of the Teamsters and that he would not participate in the re-election. He added that he believed that the new generation needed to take over the leadership of the union.

James P. Hoffa has been married to Virginia Hoffa. They have two children and six grandchildren.

His older sister, Barbara, is a retired judge.

See the events in life of James P. Hoffa in Chronological Order