Advanced Search
Academy award winning actor James Coburn was one of the “Tough Guys” of American cinema who is best known for his role as Glen Whitehouse, the dominating father of a young policeman in the drama film ‘Affliction’. Lanky with rugged looks and a gravelly voice, Coburn popularized the image of the “Macho man” in American cinema. This tough guy was no chocolate-boy hero who wooed the women with his charming ways! He was an action hero who set the screen ablaze with his fast and furious action sequences, but by no means was action his only forte. He was a very talented actor who effortlessly metamorphosed from a blithe young man into a mature character actor. It was while serving in the army that he realized his love for films and proceeded to attend drama school after being discharged. He began his acting career as a theater artist before moving on to work in television. A successful television career paved the way for his Hollywood debut and soon he carved a niche for himself as the tall and handsome action hero. The actor reached the peak of his career during the 1960s and 1970s with movies like ‘Duck, You Sucker!’ and ‘Cross of Iron’ though he continued to be active in films till his last years. American Celebrities
Nebraska Actors
Tall Celebrities
Tall Male Celebrities
Virgo Actors
Childhood & Early Life
He was born on August 31, 1928, to James Coburn, Jr. and Mylet Johnson in Nebraska. His father who previously owned a garage business lost it during the Great Depression and the family struggled in poverty.
He went to Compton Junior College after which he enlisted in the United States Army. Though he served as a truck driver he was also asked to narrate Army training films while posted at Germany. This kindled in him a love for films and he decided to study acting after his army stint.
He enrolled at the Los Angeles City College to study drama. He appeared in various school productions where he performed superbly. He made his stage debut in Herman Melville’s ‘Billy Budd’ at the La Jolla Playhouse.
He went to New York to study at the Stella Adler’s conservatory and returned to Los Angeles to pursue a career in acting. 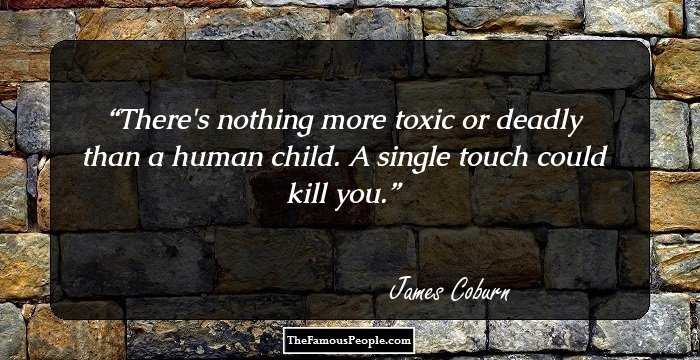 Quotes: You
Continue Reading Below
Career
With his masculine good looks and lanky frame he did not find it difficult to find work as an actor. Initially he appeared in a lot of stage productions following which he began receiving television roles.
He made his film debut in 1959 in the Western film, ‘Ride Lonesome’ which also had Randolph Scott, Karen Steele and Lee Van Cleef in starring roles. This film helped to give James the much needed exposure to Hollywood.
Buoyed by his film appearance, he started getting many offers for television roles. In 1959, he played minor or supporting roles in several TV productions like ‘State Trooper’, ‘The Californians’, and ‘The Life and Legend of Wyatt Earp’.
He played the role of Louis Sedgwick in the 1963 film ‘The Great Escape’ which was based on the real-life incident of an escape by British and Commonwealth prisoners of war from a German camp during World War II. The film was a huge success.
Along with Charlton Heston and Richard Harris, he appeared in the Western film, ‘Major Dundee’ in 1965 in which he played a one-armed Indian tracker. He was much appreciated for this role.
He portrayed a spy, Derek Flint, in the 1966 action film ‘Our Man Flint’ which was a parody of James Bond films. This was his first major role and established him as a leading movie star.
He made his foray into Italian cinema in 1971 with a role in ‘Duck, You Sucker!’. Coburn played John H. Mallory, a revolutionary wanted for killing British forces who flees to Mexico and gets involved in another revolution.
In 1976 he played Capt. Vinton Maddox in the ‘Battle of Midway’ which was a war film. Again his personality lent itself beautifully to the role of the Army Captain who he portrayed in the film. Several international stars like Henry Fonda, Robert Wagner and Toshiro Mifune also made their appearance in the film.
Along with films he also remained active in television and his professional life reached its peak during the 1970s. Unfortunately the action hero began suffering from rheumatoid arthritis during the 1980s because of which his career suffered.
Continue Reading Below
After undergoing treatment for his medical condition he was able to get it under control and thus became active in his career during the 1990s. He acted in the action comedy ‘Hudson Hawk’ in 1991 and had Bruce Willis, David Caruso and Richard Grant as co-stars.
The year 1997 was a great one for him as one of his most memorable performances happened this year. He portrayed the role of Glen Whitehouse, the abusive and alcoholic father of a police officer in the drama film ‘Affliction’. This performance won him much acclaim and praise.
In spite of his advancing age he continued acting and appeared in the movies ‘The Man from Elysian Fields’ in 2001 and ‘American Gun’ in 2002.
Major Works
His most famous performance was in ‘Affliction’ in which he played the role of a domineering father of the protagonist. Given his stern looks and small steely eyes, he suited the image of an arrogant and gruff man.
Awards & Achievements
He won the Academy Award for Best Supporting Actor for playing Glen Whitehouse in the 1997 American drama ‘Affliction’. He was nominated for a Screen Actors Guild Award for Outstanding Performance by a Male Actor in a Supporting Role for this very performance.
Personal Life & Legacy
He married Beverly Kelly in 1959. This marriage lasted for two decades and ended with the couple’s divorce in 1979.
His second marriage was to Paula Murad in 1993. The couple remained together till Coburn’s death. He had one son and one step-daughter.
He died of a heart attack in 2002, at the age 74.

See the events in life of James Coburn in Chronological Order