Advanced Search
James Cagney was an American actor. He was the second of seven children born to James Francis Cagney, Sr. and Carolyn Nelson. He attended Columbia College, but had to drop out to take up a job after his father’s death. After many odd jobs, including working as a scenery boy, he landed a role in a pantomime. He then auditioned, and won the role of a chorus girl in the play “Every Sailor”. He was an amateur boxer, and was typecast as a gangster in many movies including “The Public Enemy”, “Smart Money”, “Angels with Dirty Faces”, “Love Me or Leave Me”, for which he won a Best Actor Academy Award nomination, and “White Heat”. He tried to shrug off his gangster image in the following years. He started Cagney Productions with his brother, and was also president of the Screen Actors Guild. “Taxi!” was the movie in which he danced on screen the first time, and the last time he allowed himself to be shot at with live ammunition which was a common practise then. His other acclaimed movies were “The Gallant Hours”, and “Yankee Doodle Dandy” which won him an Academy Award for Best Actor. Image Credit
https://commons.wikimedia.org/wiki/James_Cagney#/media/File:James_Cagney_in_G_Men_trailer.jpg
(Self made screen capture from a public domain film trailer) Leonardo DiCaprio
17th July In History
DID WE MISS SOMEONE?
CLICK HERE AND TELL US
WE'LL MAKE SURE
THEY'RE HERE A.S.A.P
Quick Facts

American Celebrities
New Yorkers Actors
Columbia College
Cancer Actors
American Actors
Childhood & Early Life
James Cagney was born on July 17, 1899 to James Francis Cagney, Sr. and Carolyn Nelson. His father was of Irish descent, and worked as a bartender and amateur boxer. His mother was part Norwegian and part Irish.
He was the second of seven children. He graduated from Stuyvesant High School in New York City in 1918, and attended Columbia College of Columbia University, but dropped out after his father died.
His brother Harry was performing in a pantomime directed by Florence James. When Harry fell ill, Cagney, working as a scenery boy, stood in for him since he was able to recall lines without mistake. 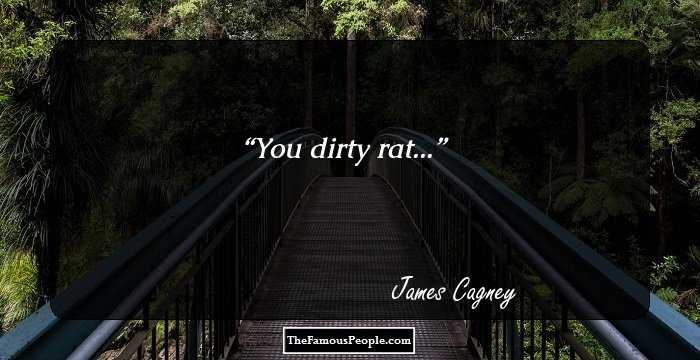 Quotes: You
Continue Reading Below
Career & Later Life
In 1919, Cagney auditioned for the role of a chorus girl in “Every Sailor”, a wartime play. The only dance he knew was the Peabody dance. It convinced the producers that he could dance.
His first significant non-dancing role was in 1925 when he played a young tough guy in the three-act play “Outside Looking In” by Maxwell Anderson, earning $200 a week.
He built a dance school for professionals. Reputed as an innovative teacher, he won an opportunity to choreograph and star in “Grand Street Follies of 1928”, followed by “Grand Street Follies of 1929”.
In 1931, he played Matt Doyle with Edward Woods as Tom Powers in “The Public Enemy”. Later, the roles were interchanged.
He and Edward G. Robinson teamed in “Smart Money”. After the US Motion Picture Production Code of 1930 was introduced, he got a break from portraying violent characters in the comedy “Blonde Crazy”.
He acted in 1932’s “Taxi!” with a $1000-a-week contract with Warner Brothers. It was the first time he danced on screen, and the last time he allowed himself to be shot at with live ammunition.
His only Shakespearean role was in “A Midsummer Night’s Dream”. He completed a decade in movies with “The Roaring Twenties”. In 1942, he founded Cagney Productions. He was elected president of Screen Actors Guild.
In 1943, Cagney Productions rolled out its first movie “Johnny Come Lately”. For “Blood on the Sun”, he underwent judo training to do his own stunts. However, the movie was a box office failure.
With Cagney Production in financial turmoil, he signed a deal whereby Cagney Productions became a unit of Warner Brothers. His portrayal of Cody Jarrett in “White Heat” in 1949 is considered his most memorable.
Continue Reading Below
In 1955, he worked with MGM on the Western film “Tribute to a Bad Man”. He received praise for his performance, and was offered a role in “These Wilder Years” with Barbara Stanwyck.
He accepted a role in the film “Ragtime” in 1981 directed by Milos Forman. Three years later, he appeared in his last role in the TV movie “Terrible Joe Moran”. 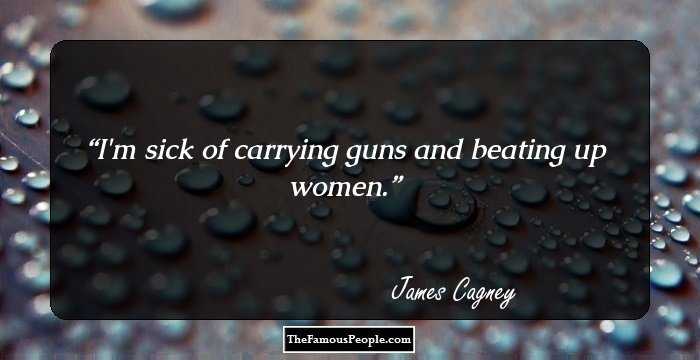 Quotes: Women
Major Works
Cagney starred with Doris Day in “Love Me or Leave Me” as Martin Snyder, a lame gangster from Chicago. His performance earned him another Best Actor Academy Award nomination.
In his 1960 critically acclaimed movie “The Gallant Hours”, he played Admiral William F. "Bull" Halsey. His penultimate film “One, Two, Three” was a comedy in which he played a Coca-Cola executive.
Awards & Achievements
Cagney played Rocky Sullivan in 1938’s “Angels with Dirty Faces”. He earned an Academy Award nomination for Best Actor, and won the New York Film Critics Circle Award for Best Actor for the role.
In 1942, he played George M. Cohan, considered his best, in the musical biography “Yankee Doodle Dandy”. The film was nominated for eight Academy Awards, and won three, including Best Actor for Cagney.
In 1974, he received the American Film Institute’s Life Achievement Award. He also received the Kennedy Center Honors, and was awarded the Presidential Medal of Freedom by Ronald Reagan. 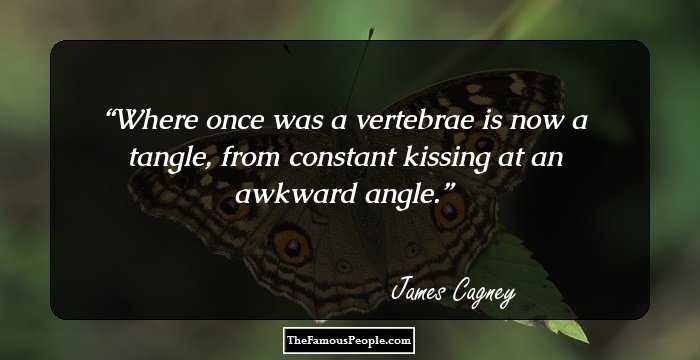 Personal Life & Legacy
When auditioning for “Pitter Patter”, Cagney met sixteen-year-old Frances Willard Vernon. They married in 1922. The couple adopted a son whom they named James Cagney, Jr., and later a daughter, Cathleen “Casey” Cagney.
In 1955, he bought a 120-acre farm in Stanfordville, Dutchess County, New York, and named it Verney Farm. He expanded it to 750 acres gradually. He also raised horses on his farms, especially Morgans.
He was diagnosed with glaucoma, and began taking eye drops. Later it was discovered that he had been misdiagnosed, and that he was actually diabetic. In 1977, he had a minor stroke.
Cagney died following a heart attack on March 30, 1986. A funeral mass was held at Manhattan’s St. Frances de Sales Roman Catholic Church. He was interred in the Cemetery of the Gate of Heaven in New York.
Trivia
This famous American actor was an enthusiastic farmer, and was awarded an honorary degree from Floridas Rollins College. He wrote and submitted a paper on soil conservation when he went to accept his degree.

See the events in life of James Cagney in Chronological Order