Jack Van Impe was an American televangelist known as the founder of Jack Van Impe Ministries International. Born and raised in Michigan as the only child, he followed his father’s footsteps and had an evangelical conversion when he was 12 years old. Following his high school graduation, he enrolled into the Detroit Bible Institute and after he graduated, he established Jack Van Impe Ministries with his wife. In the 1950s, during the initial years of his career, he recorded several gospels and spoken words and became popular. Him and his wife toured around the country to several cities and did evangelist work. In the 1970s, the ministry began its radio show and within a decade, Jack also began appearing on television, furthering his Christian evangelist work. He was an eschatological preacher, who preached about the doomsday extensively, which also became the reason for his criticism. In addition, he also openly criticized the Christian missionaries on his program. He was also known as the walking Bible, as he knew most of the King James Bible by heart. He developed health issues in the mid-2000s and eventually passed away due to multiple ailments on January 18, 2020. Jerry Falwell
DID WE MISS SOMEONE?
CLICK HERE AND TELL US
WE'LL MAKE SURE
THEY'RE HERE A.S.A.P
Quick Facts

Jack Van Impe was born Jack Leo Van Impe, on February 9, 1931, in Freeport, Michigan, to Marie Louise and Oscar Van Impe, as the only child in the family. His parents had European ancestry and had immigrated to the United States from Belgium in the late 1920s. His initial tryst with faith happened due to his father, who was a missionary.

Jack Van Impe was born during the time of the Great Depression and hence, the family struggled from extreme poverty during their early years in the United States. His parents worked as labourers in vegetable farms around Michigan. Family’s worsening financial situation was somehow relieved when his father got a job at a Plymouth car factory.

However, Jack Van Impe claimed that his father was a non-religious person in the beginning. He was an alcoholic and used to use swear words and discarded religion totally. He was also an accordion player and had trained his son in the same. Many nights, the father-son duo would play accordions at local night clubs. Jack claimed that he was also growing into an alcoholic as he used to drink on the dining table as a teenager, which was a European tradition.

But when at the age of 12, he saw his father quitting alcohol for good after embracing religion, Jack Van Impe also began getting more inclined towards the faith.

He completed his high school graduation in 1948, from a local Michigan high school. In 1948, following his graduation from the high school, he enrolled into the Detroit Bible Institute and earned a diploma in 1952. It became his stepping stone towards realizing his life-long dream of becoming a missionary like his father.

In 1951, he was ordained by a Baptist church and after he graduated from the Detroit Bible Institute, he joined the Youth for Christ movement. Youth for Christ happens to be an international Christian religious movement that targets the youths across the countries to expand missionary and evangelical work. Jack had initially joined the movement as a musician as he toured around the country, doing missionary work while playing accordion.

He had joined Youth for Christ around the same time as the popular evangelist Billy Graham. Right from the beginning, Jack was an Eschatologist Preacher, who believed that the world was approaching an end. In that way, he believed that Christ was going to be born again, to catapult the world into a new era.

In 1970, Jack Van Impe and his wife laid the foundation of Jack Van Impe Crusades Inc. and they both began travelling around the country together, and within the next decade, they had travelled to 130 cities.

During the first few years, in the early 1950s, he delivered a few political sermons. One of the most popular among his recorded sermons was titled ‘The Coming War with Russia’. In the sermon, he talked about the dangers of communism as he believed that they had denounced God completely and thus, would usher the world into a total annihilation.

His another popular early sermon was titled ‘Shocking Signs of the End of the Age’. He was also criticized to be political in his approach as he frequently gave sermons on the current events, the ill-effects of communism, homosexuality and abortion among many other socio-political issues.

Somehow throughout his career, his favourite target remained the Christian ministers whom he believed had strayed away from their one true purpose, which was spreading the message of Christ. He constantly attacked several Christian ministers and sometimes, he even took names bluntly.

In 1970s, the ministry’s reach expanded from live sermons to the radio programs and in the early 1980s, television was adapted as a medium. Jack Van Impe continued his style of talking, criticizing other Christians, however, when he realized the extremities of his ‘super-separatist’ mentality, he apologized for it.

In 1982, he attended a Sunday School Convention, where he stated that he would no longer be a biased, hate-filled man and that he would love all people even when they have different denominations than him.

However, the ministry’s television shows were not garnering the desired response, which resulted in the halting of the televised broadcast in 1984. In 1988, the ministry re-launched itself on television, this time via TBN, Trinity Broadcasting Network.

This time around, there was a little change in the way Jack and his wife Rexella presented the show. As per the new format of the show, it began with Rexella performing a slow musical number and then Jack would make his entry, beginning with reading out daily headlines. Along with reading the headlines, Jack tried to decipher their prophetic meaning.

Jack Van Impe had famously memorized the King James Version of the Bible and believed in that interpretation more than any other. He knew the Bible word to word and thus, he was also known as the ‘Walking Bible’ among his fans and peers.

As per his interpretation of the Bible, the world will be divided in ten political subdivisions and they all will be ruled by Islamic World and the European Union. He also believed in the Prophecy of Popes and believed that the incumbent Pope Francis will be the Pope when the Armageddon takes place.

He also believed that one world religion will form after the said Armageddon, named Chrislam, when Islam and Christianity will combine.

The television show ‘Jack Van Impe Presents’ began airing in the late 1980s and the weekly show continued its broadcast until his death in January 2020. During its heyday, in the mid-1990s, the show was being aired in 150 countries around the world.

During one of the episodes, he announced that Christ would reborn in the the world between 2001 and 2012 and warned that Christians faced a great danger from the Antichrist.

In the 21st century, he warned his audience about the looming danger from Islam and criticized several ministers for not taking strong enough stand against the Islamists. He has also prophesized about the Third World War. Due to his extreme opinions on the matter, he entered into scuffle with the broadcaster TBN when the latter decided to not air the episode in 2011. Jack got separated from the channel and began broadcasting ‘Jack Van Impe Presents’ on the internet.

Jack Van Impe met Rexella Shelton at a Youth for Christ Rally, in 1952. She was an organist and the couple got married in 1954. They began the Jack Van Impe Ministries together.

Jack began having health issues, starting from the mid-2000s, when he announced that he had a knee replacement surgery. In the mid-2010s, he suffered from cancer, sepsis and ulcers. In 2015, his wife said that he was having a triple by-pass heart surgery. 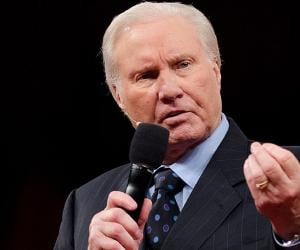