Jackie Robinson, the first African-American to play in ‘Major League Baseball,’ is one of the most inspirational and towering figures of the 20th century. Withstanding the racial segregation prevalent during his time, Robinson proved to the world that the spirit of a game has nothing to do with color or race. Not only did he set an example but also helped a whole generation of young African-American players enter the ‘Major Baseball League.’ For him, baseball was more than a game - it was a medium to express his views on racism and to show that he was no different from anyone else in the team. However, his journey from a discriminated baseball player to one of the highly-recognized players was quite audacious. As he played for the ‘Dodgers,’ he faced several threats and was even booed by the audiences. Even his family was not spared, but Robinson had only one thought in his mind – to play his game no matter what. And so he did! He emerged as one of the greatest players in the history of American baseball, who survived racial discrimination to achieve greatness. After so many achievements and records, he was bestowed with several honors and many institutions were set up in his name. American Celebrities
Baseball Players
American Men
University Of California, Los Angeles
Male Sportspersons
Childhood & Early Life
Born on January 31, 1919, in Cairo, Georgia, USA, to Jerry and Mallie Robinson, Jackie was the youngest of the five children in the family.
In 1920, after his father abandoned his family, they moved to Pasadena, California, where his mother took up sundry jobs to sustain her family.
He graduated from ‘Washington Junior High School’ in 1935. He was sent to ‘John Muir High School’ where his athletic talents were discovered. He excelled in many sports, especially football, basketball, track and field, and baseball.
After completing his studies in ‘John Muir,’ he attended ‘Pasadena Junior College’ from where he graduated in 1939. He was enrolled at the ‘University of California, Los Angeles’ and became the university’s first student to win varsity letters in four sports - baseball, basketball, football, and track and field.
However, in 1941, he had to quit college, owing to financial difficulties. He then moved to Hawaii, where he played soccer for the semi-professional team ‘Honolulu Bears.’ 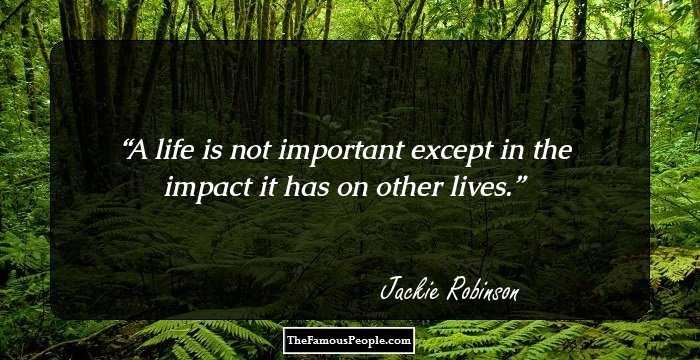 Quotes: Life
Continue Reading Below
Awards & Achievements
Robinson was named the ‘Rookie of the Year’ in 1947 with a batting average of .297, 175 hits, and 12 home runs.
In 1949, he earned the title of ‘Most Valuable Player’ for a batting average of .342.
He was inducted into the ‘Baseball Hall of Fame’ in 1962, becoming the first African-American to have earned this honor.
He was awarded the ‘Presidential Medal of Freedom,’ the highest civilian honor in America, on March 26, 1984. He was honored with the ‘Congressional Gold Medal’ on March 2, 2005. 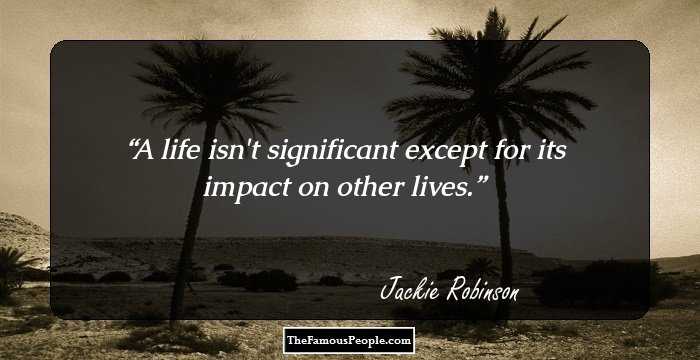 Quotes: Life
Personal Life & Legacy
Robinson married Rachel Isum, whom he had met at the ‘University of California’ in 1946. The couple had three children, Jackie Robinson Jr., Sharon Robinson, and David Robinson.
He died of heart attack at the age of 53, and his funeral was attended by thousands of people.
After his death, his wife established the ‘Jackie Robinson Foundation’ in 1973 with the aim of providing scholarships for higher education to minority youths.
In 2002, he was included in the list of ‘100 Greatest African-Americans.’ In 2004, ‘Jackie Robinson Award’ was created in the ‘Aflac National High School’ in his honor.
Trivia
In April 1997, his jersey number 42 was retired in his honor.
While serving the U.S. army, this baseball player, who was the first African-American to play in the ‘Major Leagues,’ faced court-martial for refusing to sit at the back of a bus. 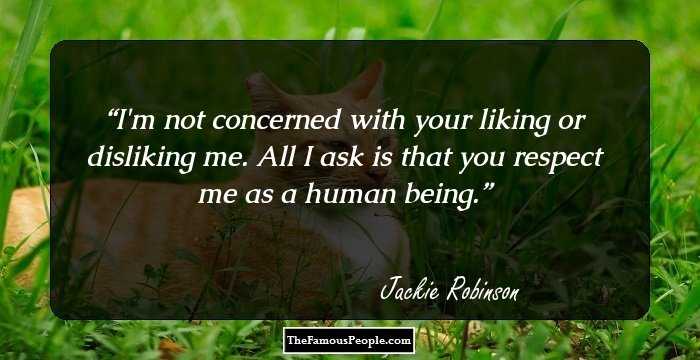 See the events in life of Jackie Robinson in Chronological Order