Irenaeus was a famous Greek apologist against the Gnostic movements of early Christianity, and the bishop of the Roman city of Lugdunum in the province of Gaul, presently Lyon, France. The foremost Christian theologian of the 2nd century, he is best known for his work ‘Adversus Haereses’ (Against Heresies), written circa 180 AD. Almost all of his writings were denunciations of theological rivals that challenged the emerging Christian orthodoxy, in concordance with the Church of Rome. He is credited with one of the earliest lists of the biblical canon that includes all the four gospels, which is now part of the New Testament. He was also among the first to use the principle of apostolic succession to refute heretics and theological opponents - which professes that bishops are the direct and uninterrupted line of succession from the Apostles of Jesus Christ, and that their exclusive authority and special powers were handed down to them from the apostles themselves. Irenaeus is arguably the most important link between the apostolic church and later Christianity, as well as the obvious connection between eastern and western orthodoxies owing to his place of origin and his seminal work to strengthen the Catholic church. Greek People
Greek Men
Greek Saints
Male Leaders
Greek Leaders
Origins & Early Years
Irenaeus is thought to have been born sometime between 120 and 140 AD to Greek parents in Smyrna in the western part of Asia Minor, in the present day city of İzmir, Turkey. He was raised in a family that had already adopted Christian, a rarity for those times. Most of his adult contemporaries were converts.
The bishop of his hometown was the martyr Polycarp, whose teachings he heard and drew from. Polycarp was the last known living Christian who had a direct connection to the original apostles, before he was burnt at the stake in 155 AD.
According to canon, the Apostle John lived at Ephesus when Polycarp was a young boy. One can therefore assume that only 3 generations separated Jesus Christ of Nazareth and Saint Irenaeus of Lyon.
When Irenaeus arrived in Gaul, Christianity was growing rapidly in the Roman Empire, particularly around the Mediterranean sea. Christian communities, mostly immigrants from Asia Minor, could have already been in the area by mid 2nd century AD.
Continue Reading Below
You May Like

Who Is The Most Popular BTS Member?
Life & Career
Eusebius of Caesarea, the profoundly important church historian from 4th century CE, states that Irenaeus was already serving as a missionary in Gaul and as an arbiter for churches of Asia Minor that were suffering upheaval and conflict due to heretic activities.
After the persecution of the church and Christians by the Roman Emperor Marcus Aurelius, Irenaeus, who was away in Rome at the time, came back to succeed the martyred Pothinus as the bishop of Lugdunum, in 177 AD. He operated between the cities of Vienne and Lyon, which are only around 20 miles away from each other.
Little is known of his activities thereafter, but living in an era of expansion and inner tensions within the church, Irenaeus became an accomplished mediator between squabbling factions. For instance, the eastern churches had continued celebrating Easter on the same day as the Jewish Passover despite the Roman Church mandating it to be celebrated only on the day of the Resurrection of Christ, i.e., a Sunday. Irenaeus was instrumental in diffusing such situations and advocated that superficial issues must not jeopardize the unity of the church. According to Eusebius, he successfully influenced Pope Victor I to not excommunicate Christians in Asia Minor for such practices, circa 190 AD.
He devised 3 ‘pillars of orthodoxy’ to counter Gnosticism’s claims of higher wisdom and secret knowledge, and its wide appeal due to the more sophisticated understanding of Christian belief it offered as opposed to the apostolic word and what the local churches preached - one, the scriptures, two, the apostolic tradition handed down by the apostles themselves, and three, the teachings of the apostles' successors.
To oppose the Gnostic idea of a spiritual elite, he propagated that the Gospel was meant for one and all. He was perhaps the first to characterize the Church as "catholic", or universal, and contrasted single congregations to the universal church as its local chapters or franchises.
He also contrasted Christianity with Judaism, stating that Judaism preserved Abrahamic monotheism with a homeland and a national core among a single chosen people, while Christianity was meant to spread that truth from this base to all the lands.
Irenaeus died between 200 and 203 AD, probably in Lyon, and was buried at the Church of Saint John, which was later renamed after him as St. Irenaeus. His tomb is said to have been destroyed by French Protestants in 1562.
Writings
Irenaeus' principal extant writings are called the ‘Refutation and Overthrow of Knowledge Falsely So-called’ - in short, ‘Against Heresies’. This five book work was originally written in Greek, and now available in its entirety only in its Latin translation. The date of the translation is contentious, but usually assigned between 200 and 400 AD. The first 4 books analyze and refute Gnostic doctrines, while the last book is a more positive proclamation of the unified, singular faith of the church as opposed to the diverse, contradictory schools of thought within Gnosticism.
The only other extant work surviving in its entirety is the ‘Demonstration of the Apostolic Preaching’, thanks to the discovery of an Armenian version of this long-lost work in 1904. This text was probably intended as an instructional for the Baptism of recent converts.
The lost works of Irenaeus include the treatises ‘On the Ogdoad’ and ‘Concerning Knowledge’, and letters ‘On Schism’ and ‘On the Monarchy’.
Legacy
Irenaeus is recognized as a martyr and a saint by both the Roman Catholic and Eastern Orthodox Churches, and also considered a distinguished ‘Father of the Church’. The former celebrates ‘Irenaeus' feast day’ on June 28, and the latter, on August 23.
He had a profound influence on the next generation of Christian theologians, including Hippolytus and Tertullian. His writings were first translated to English by John Keble and published in 1872.
While the Gnostics denied it, Irenaeus upheld the validity of the Old Testament. Even though he did not actually refer to two different bibles in his writings, he did pave the way for this terminology to be adopted by Judeo-Christian scholarship.
Modern scholars rely almost entirely on the writings of Irenaeus while reconstructing Gnostic teachings, as he included in them a comprehensive review of Gnostic views before proceeding to refute them. The discovery of the Gnostic library near Najʿ Ḥammādī in Egypt in the 1940s confirmed the precision with which he reported Gnostic doctrines before attacking them.
Recommended Lists:
Leaders #4291
You May Like

See the events in life of Irenaeus in Chronological Order 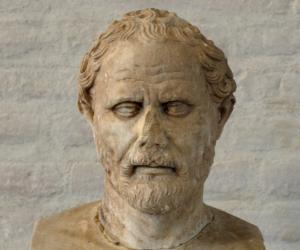