Advanced Search
Irena Sendler was a Polish woman who along with her trusted network is credited to have saved the lives of 2,500 Jewish children during the Holocaust. Working as a nurse and a social worker, she was active in the ‘Polish Underground’—the Polish resistance movement in World War II—in German-occupied Warsaw during the World War II. As a young woman she was deeply influenced by her father who was a doctor and also one of the first Polish Socialists. She grew up watching her father tend to the poor patients and this instilled in her a desire to help the needy and the underprivileged in whatever ways she could. When the Germans invaded Warsaw in 1939 and started inflicting unspeakable tortures on the Jewish population, she made it her priority to help out the Jews by offering them food and shelter. She collaborated with some of her trusted allies and used her position to obtain thousands of false documents to help the Jewish families. As a nurse and a social worker, Irena was in charge of the Children’s Division of Zegota, a Polish underground group to assist Jewish people. In this position, she worked tirelessly with her helpers to smuggle around 2,500 children out of the Warsaw Ghetto and provided them safe shelter outside the ghetto Lillian Wald
DID WE MISS SOMEONE?
CLICK HERE AND TELL US
WE'LL MAKE SURE
THEY'RE HERE A.S.A.P
Quick Facts

Polish Celebrities
Polish Women
Aquarius Women
Childhood & Early Life
She was born as Irena Krzyżanowska on 15 February 1910 in Otwock, near Warsaw, to Stanisław Krzyżanowski and his wife Janina. She was the only child of her parents.
Her father was a physician and also one of the first Polish Socialists. She was greatly influenced by his selfless service to the patients, most of whom were Jewish and poor. Her father contracted typhus while treating Jewish patients the other doctors had refused to treat and died in February 1917.
Irena studied Polish literature at Warsaw University, and joined the Polish Socialist Party. She was a courageous girl and openly protested against the ghetto-bench system that existed at some prewar Polish universities. Due to this she was suspended from the University of Warsaw for three years.
Continue Reading Below
Career
During the late 1930s Irena Sendler moved to Warsaw and started working for the municipal Social Welfare departments. The Germans invaded Poland in 1939 and the Nazis started brutalizing the citizens, especially the Jewish population.
She was working as a Senior Administrator in the Warsaw Social Welfare Department at that time. The department operated canteens all over the city and provided meals and other necessities to the orphans, elderly, and the poor.
Irena Sendler realized the pathetic situation of the Jews under the Nazis and helped the Jews by registering them under fictitious Christian names and reported the Jewish families as being afflicted with highly infectious diseases in order to prevent inspections.
She was taking a huge risk by helping the Jews as giving any kind of assistance to Jews in German-occupied Poland was punishable by death. Yet she courageously continued her services to the Jews.
The Zegota, an underground organization also known as the Council to Aid Jews, selected her to head its Jewish children’s section in 1943. During this time, she was assigned the name of ‘Jolanta’ in order to protect her real identity.
As an employee of the Social Welfare Department, she had a special permit to enter the Warsaw Ghetto, an area into which hundreds of thousands of Jews were herded and imprisoned. Inside the ghetto, the Jews lived in highly deplorable conditions and were most likely to be killed by the Nazis in the near future.
Sendler, along with some other like-minded and courageous women started smuggling out Jewish children from the ghetto. The babies and children were hidden in gunny bags, buried inside loads of goods, or sometimes even placed in coffins to hide them from the Nazis and transported to safer places.
She ensured that the children were provided with false identities and placed them in non-Jewish homes, orphanages, and convents. She also documented the children’s original names and new identities in coded form and hid the records by placing them inside jars and burying them under trees.
She and her helpers had succeeded in saving around 2,500 children in this manner. However, her clandestine activities were discovered by the Gestapo and she was severely tortured. She refused to divulge any vital information inspite of being brutally tortured and was finally sentenced to death.
Continue Reading Below
Sendler managed to escape death at the last minute due to the intervention of Zegota members. She then acquired a false identity and continued her work with the Zegota, working as a nurse until the Germans left Warsaw.
During her later years she worked for the Ministries of Education and Health, and helped to organize a number of orphanages and children, family, and elderly care centers.
Major Works
Irena Sendler is best remembered for the pivotal role she played in saving the lives of approximately 2,500 Jewish children during the Holocaust in which most of the parents ultimately perished. She smuggled them out of the Warsaw Ghetto and helped in finding them homes with non-Jewish families, an act for which she later received widespread recognition.
Awards & Achievements
Irena Sendler was recognized by Yad Vashem as one of the Polish Righteous among the Nations in 1965, and a tree was planted in her honor at the entrance to the Avenue of the Righteous.
She was awarded the Commander's Cross of the Order of Polonia Restituta in Poland in 1996, and a higher version of this award, the Commander's Cross with Star, in 2001.
She was honored with the Order of the White Eagle, Poland's highest civilian decoration, in 2003.
She was posthumously granted two awards in 2009: the Humanitarian of the Year award from The Sister Rose Thering Endowment, and the Audrey Hepburn Humanitarian Award.
Personal Life & Legacy
She first got married in 1931 to Mieczysław Sendler. However, the couple divorced in 1947.
Her second marriage was to Stefan Zgrzembski, a Jewish friend from her university days. She gave birth to three children during this marriage. This marriage too ended in divorce in 1959. Eventually she remarried her first husband, Mieczysław Sendler.
Irena Sendler lived a long life, and spent her last years in Warsaw. She died on 12 May 2008, aged 98, and is buried in Warsaw's Powązki Cemetery.

See the events in life of Irena Sendler in Chronological Order 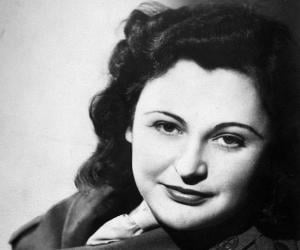