Harpo Marx, born as Adolph Marx, was a comedian and mime artist who was the second-oldest of the famous Marx Brothers. As a comedian of the silent era, he wore a funny costume consisting of a wig of unruly curly red hair and a top hat. He never spoke on stage, and used his body language and a honking horn to communicate with his audience. Legend has it that he lacked the sharp wits to effectively say funny things to make the audience laugh and therefore his brothers did not allow him to speak. But he was not someone to be disheartened—he evolved into such an emotive mime artist that soon his popularity surpassed that of his brothers’. He used to play a harp, albeit in a wrong way, and that is why he acquired his stage name ‘Harpo’. The Marx brothers had a difficult childhood ridden with poverty, but they were determined to overcome life’s challenges in order to make a name for themselves in the show biz. Their family comedy act, Marx Brothers was very successful and the group eventually made their way into Broadways and films where also they were able to replicate their success. More than just an entertainer, Marx was also a dedicated family man, completely devoted to his brothers, wife and children. Will Smith
Actors #2406
Comedians #457
Film & Theater Personalities #5131
DID WE MISS SOMEONE?
CLICK HERE AND TELL US
WE'LL MAKE SURE
THEY'RE HERE A.S.A.P
Quick Facts

American Celebrities
Comedians
American Men
New Yorkers Actors
Male Comedians
Childhood & Early Life
Harpo Marx was born to Jewish parents in New York. His father, Sam Marx was a tailor who could hardly earn enough to feed his large family. His mother Minnie Marx, though poor was a very ambitious woman who motivated her sons to achieve great success in life.
He did not acquire much formal education as he had dropped out of school early. Being the only Jew in class, he was constantly tormented by his classmates until he could not take it anymore and left the school for good.
Coming form a poor family, Harpo and his brothers started doing odd jobs from a young age to make ends meet. 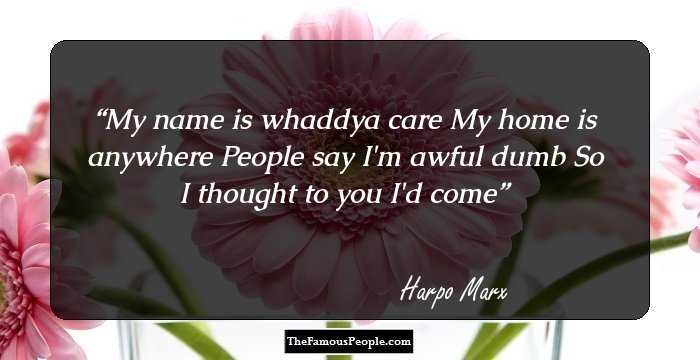 Quotes: You, Home, I
Continue Reading Below
You May Like

The Best Black Actresses Of All Time
Career
In 1910, Harpo and two of his bothers formed a singing group called ‘The Three Nightingales’. Initially Harpo was also given a speaking part though he could not speak his lines as effectively as his brothers did. This motivated him to develop himself as a mime artist instead.
He was musically very talented and could play six different instruments. His stage roles often had him playing a harp, and therefore he gained the name ‘Harpo’.
The brothers brought in more family members into their group which was then renamed as ‘The Four Nightingales’. The group also shifted their focus from singing to comedy, and finally decided on the name ‘Marx Brothers’.
By the mid-1910s, the brothers began to develop their own unique style of comedy and their distinctive character traits. Harpo began wearing a huge wig of curly red hair, a top hat, and a raincoat. He never spoke on stage and honked a horn to communicate.
The Marx Brothers became America’s most loved comedy act due to their witty sarcasm and bizarre sense of humour.
The brothers made a film ‘Humor Risk’ in 1921, but the film was never released. It is now considered to be a lost film.
The Marx brothers made their Broadway debut with the Johnstone brothers’ stage revue ‘I’ll Say She is’ in 1924. They followed it with a musical, ‘The Cocoanuts’ in 1925 and ‘Animal Crackers’ in 1928.
Harpo appeared in a comedy film ‘Too Many Kisses’ in 1925. In the movie he played the role of the village Peter Pan and spoke only one line.
The brothers featured in 1931 comedy film ‘Monkey Business’ along with the comedienne Thelma Todd. The film was set on an ocean liner and dealt with the story of four brothers forced to work for gangsters.
Continue Reading Below
He starred with his brothers in the comedy film ‘At the Circus’ in 1939 in which they save a circus from bankruptcy. The film was very well received by the audience who found the brothers’ act very comical.
In 1946, he acted in Archie Mayo’s ‘A Night in Casablanca’ which tells the story of a criminal trying to reclaim his stolen goods.
Major Works
The comedy film ‘Monkey Business’ (1931) was a huge hit at the time of its release and was regarded as the Marx Brothers’ most financially successful film. The movie had a famous scene in which each of the brothers tries to masquerade as a famous film star.
The Marx Brothers’ anarchic comedy film ‘Duck Soup’ (1933) was a box office disappointment at the time of its release. However, the opinion of the critics evolved over the years, and today it is considered to be one of the brothers’ best films.
He starred as Punchy in the movie ‘At the Circus’ (1939) where he helps to rescue a circus from the hands of unscrupulous elements. The film was described as "a veritable riot of hilarity" by the newspapers.
Personal Life & Legacy
Harpo was a “confirmed bachelor” when he met actress Susan Fleming at a party. The lady fell madly in love with his warm and charming persona and pursued him for years before he finally accepted her proposal. They were married in 1936. The couple adopted four children.
He suffered from a heart attack in 1964 and was advised to have an open-heart surgery. He died shortly after the surgery at the age of 75.
Trivia
He died on the day of his 28th wedding anniversary.
He resembled his elder brother so much that they were often mistaken for twins when young.
His maternal uncle Al Shean was part of the legendary vaudeville team of Gallagher & Shean.

See the events in life of Harpo Marx in Chronological Order