Halle Bailey is an American singer and actress, best known as one-half of the popular duo ‘Chloe x Halle’. She and her sister hit a goldmine when their YouTube cover of Beyoncé’s “Pretty Hurts” caught the attention of the music icon herself. Catapulting them to overnight fame, the song became a life-changer for them. Since then, Halle Bailey and her sister Chloe got the opportunity to perform the opening acts for Beyoncé’s ‘The Formation World Tour’ and Andra Day’s ‘Cheers to the Fall Tour’. They have also released chart-topping albums like ‘Uncovered’, ‘Sugar Symphony’ and ‘The Kids Are Alright’. What makes Halle and Chloe stand apart is their genre-transcending musical style. As far as her acting career is concerned, Halle appeared in a few films like ‘Last Holiday’ and ‘Let It Shine’. She also earned praise for her performances on TV series, such as ‘House of Payne’ and ‘Grown-ish’. With a massive following on YouTube and Instagram, the Bailey sisters are on their way to superstardom. 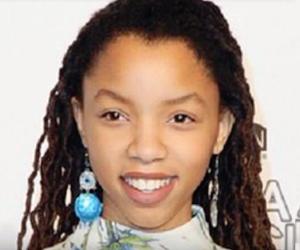 American People
Black Actresses
Black Musicians
Lyricists & Songwriters
Rhythm & Blues Singers
Career
Halle Bailey learned to play the cello and violin at a very young age. She was inspired by her elder sister, Chloe, who was passionate about music. Just like her sister, Halle taught herself to play the guitar by watching YouTube tutorials. After seeing the sisters’ musical progress, their father Doug Bailey quit his day job and became their full time manager, so that the girls could perform all over Atlanta. Soon, the duo started posting videos on YouTube. On their channel ‘Chloe x Halle’, the sisters posted their first video “Love Is You” on March 30, 2008. The young singers caught the attention of millions of people with their soulful performance. They followed that up with amazing renditions of Beyoncé’s “Best Thing I Never Had” and “Countdown”; Lil Wayne’s “How to Love” and Alicia Keys’ “Girl on Fire”. After singing these covers, ‘Chloe x Halle’ became very popular, gaining millions of views and becoming YouTube celebrities.
Unlike countless YouTube musicians who initially show great potential, but slowly fade away, Halle and her sister were determined to make it as musicians. On September 23, 2013, the duo digitally released its critically acclaimed EP ‘Uncovered’. When the sisters uploaded a cover of Beyoncé’s “Pretty Hurts” on December 22, 2013, little did they know that it would change their lives. The cover went viral, caught the attention of Beyoncé, and she also shared it on her Facebook page. If that was not enough, Halle and Chloe signed a million dollar contract with Beyoncé’s own music label ‘Parkwood Entertainment’ in 2015. The Queen Bey also became their mentor while leaving the creative freedom up to them. She recognized their musical genius and told them to “Trust your gift and let the world catch up to you”.
‘Chloe x Halle’ made its official debut under ‘Parkwood Entertainment’ with the EP ‘Sugar Symphony’ on April 29, 2016. They performed their new album’s track “Fall” at the ‘White House Easter Egg Roll’, for which the first lady Michelle Obama had invited them. In June 2016, they gave praiseworthy performances at the ‘YouTube Music Foundry’ and the ‘BET Awards’. The year 2016 proved a great one for Bailey’s career, as ‘Chloe x Halle’ were the opening acts for Beyoncé’s ‘The Formation World Tour’ and Andra Day’s ‘Cheers to the Fall Tour’. Around this time, Halle and Chloe also started making waves for their bohemian fashion sense and looks.
Apart from music, Halle also happens to be a remarkable actress who debuted in the 2006 romantic comedy film ‘Last Holiday’. She was then seen in the movies ‘Let It Shine’ and ‘Joyful Noise’ in 2012. Her TV credits include ‘House of Payne’ (2007), ‘Austin & Ally’ (2013) and the recurring role of Skylar in ‘Grown-ish’ (2018 – present). She and her sister composed and sung the theme song (Grown) for the show ‘Grown-ish’ in December 2017.
Halle Bailey’s musical journey continued hitting all the right notes, as ‘Chloe x Halle’s’ mixtape ‘The Two of Us’ released on March 16, 2017. A year later, they released their debut studio album ‘The Kids Are Alright’. The chart-topping album went on to earn two ‘Grammy’ nominations for Best Urban Contemporary Album and Best New Artist in 2019. The album also contained the track “Warrior”, which was used in the 2018 movie ‘A Wrinkle in Time’. All eyes were on Halle and Chloe when they performed “America the Beautiful” at Super Bowl LIII on February 3, 2019. In April 2019, they released the song “Be Yourself” for the movie ‘Little’. Halle has also walked the runway for ‘Dolce & Gabbana’ and ‘Rodarte’ along with her sister Chloe.
You May Like

Black Rhythm & Blues Singers
Black Lyricists & Songwriters
Black Film & Theater Personalities
American Women
Continue Reading Below
Family & Personal Life
Halle Bailey was born on March 27, 2000, in Atlanta, Georgia, USA, to Doug and Courtney Bailey. Her older sister Chloe Bailey is also a singer and actress. Halle and Chloe acted together in three films and two television series. Their father quit his job to become their manager. Halle also has a younger brother. She did not attend a regular school and was homeschooled. Their family moved from Atlanta to Los Angeles, where she graduated from high school on June 8, 2018.
Recommended Lists: