16th July In History
DID WE MISS SOMEONE?
CLICK HERE AND TELL US
WE'LL MAKE SURE
THEY'RE HERE A.S.A.P
Popularity Index
01
Quick Facts

Who was Gottlob Berger?

Gottlob Berger was a German high ranking Nazi official who held the position of the lieutenant general and chief of SS main office during the Second World War, who was the in-charge of recruiting for the SS. Born and raised in Wurttemberg into an upper middle class family, he later volunteered to join the German Army during the First World War, ending up with the rank of lieutenant towards the end of the war. He also won an Iron Cross First Class for his services towards the army. He further joined the Nazi Party in the early 1920s. He also worked as a physical education teacher briefly before rejoining the Nazi Party later in the decade. He took several positions within the German army in the 1930s and eventually he was appointed as the head of the recruiting office of the SS Main office in 1938. He was an competitive recruiter who brought Waffen-SS to become one most crucial part of the German Army. As the recruiting head, his methods were not always liked by the higher Nazi officials, but he delivered nicely, recruiting about 38 divisions of the Waffen-SS towards the end of war. He was captured in May 1945 by the American troops and was sentenced to 25 years in prison, getting released after six and a half years.

Gottlob Berger was born on July 16, 1896, in Gerstetten, Kingdom of Wurttemberg, a state in the German Empire, to Christine and Johannes Berger as one among the eight children in the family. He was raised in an upper middle class German family and his parents owned a saw mill.

He completed his early education from local elementary and junior high school and in order to become a teacher, he received training at Nurtingen. However, his interests lied in joining the German Army and serving his nation. He was in his late teen years when the First World War broke out and he volunteered for a military service, along with his three brothers.

Gottlob Berger exhibited bravery on the battlefield and got wounded four times, also receiving an Iron Cross medal for his valour as a part of the infantry. By the time the war ended, his body had become about 70 percent disable. His brothers were not as lucky however, as two of them died on the battlefield, and one was executed in the United States when he was caught spying for Germany.

As the war ended in 1919, he had been promoted to the position of a Lieutenant by then. His political bent and his excellent combative skills had him instated in a leadership position in the Einwohnerwehr militia.

He also kept his eyes on the rise of the Nazi Party and joined the party in 1922 and got arrested briefly in late 1923 when the Nazi party attempted a failed coup on the German government.

Getting released from the jail, Gottlob Berger decided to walk a separate path and worked as a physical education teacher as he had lost interest in politics. But towards the end of the 1920s, he rejoined the Nazi Party, and in January 1931, he further joined the Sturmabteilung, SA.

In January 1933, the Nazi Party rose to power and with that Gottlob Berger accepted his appointment as the leader of the Schutzhaft Operations. However, his SA career came into trouble when he clashed with other young leaders of the party. He was considered to be too outspoken and way too ambitious. In the mid 1930s, he was appointed by Heinrich Himmler as the head of the sports office, which was a part of Heinrich’s personal staff.

In 1938, Gottlob Berger was appointed into the SS main office as the chief of the recruiting department, which further led the SS to become an instrumental tool in the arsenal of the Nazi Party. Gottlob’s organizational skills also led him to be considered as the perfect candidate for the SS recruitment office as he was the one who proposed for SS to be transformed into a combat troop, which was known as the Waffen-SS.

In the next year, he was appointed as the chief of the SS-HA and it played a major role in Wehrmacht, the combined German forces, take control. Gottlob’s recruitment methods were largely questioned by the senior Nazi officials as he blatantly included Scandinavian and western European candidates into the SS.

Unlike other Nazi officials, he did not care much about SS being a replacement for the religion, as ‘racial purity’ was what the Nazi party propagated. And Gottlob’s recruitment methods of recruitment stated that even the people who did not adhere to the ‘racial purity’ concept, were also to be made part of the SS.

Despite many roadblocks that came his way, Gottlob was massively successful in appointing more than 60,000 men in the Waffen-SS. By the end of 1940, he was also recruiting the convicted criminals into the SS.

German Guidance Office was further formed in the early 1941, with its main goal being the recruitment of the ‘Germanic Men’ from all over Europe. Around the same time, Hitler gave his nod to the creation of SS Volunteer Regiment Northwest, in order to recruit manpower from Flanders and the Netherlands and hence, 2500 more men were recruited into the SS.

By the end of April 1941, Hitler asked Gottlob to recruit at-least 20,000 more men to the Waffen-SS and gave him a free hand. Gottlob took up the responsibility and ended up recruiting more than 22,000 men, with many of them being 18 year olds.

Hitler had occupied countries of Western Europe and as he needed more men for his invasion of Russia, he became open to recruiting the non-German men for the SS. Gottlob was somehow opposed to the idea and wanted only the ‘Germanic’ men for the Waffen-SS, but eventually he agreed. However, this posed a problem of the non-German SS members facing bullying and discriminations from their German counterparts. This also led to a slowing down of the non-Germans from the Nazi occupied countries volunteering to join the SS.

Despite many instances of ideological and methodical differences with the higher Nazi officials, Gottlob turned out to be a highly successful recruiter and grew the strength of Waffen-SS to 38 divisions by the time the war ended.

While he continued to head the SS-HA, he also took on several other responsibilities during the war-time. As a result of German occupation in the Eastern European countries, the economic activities needed to be directed in a balanced manner. Hence, the Reich Ministry for the Occupied Eastern Territories was founded, of which Gottlob was a key member.

However, his methods of working remained as controversial as ever here as well. He proposed a plan in which about 50,000 children of ages 11-14 were to be kidnapped and sent to Germany as slave labourers.

Slovak National Uprising took place in 1944, after which Gottlob was appointed as the military commander and was sent to Slovakia to curb the revolt, which he failed to suppress. He was also appointed as the chief of the prisoners-of-war camps.

During the final months of the war, when the Allied victory was almost certain, Gottlob was sent to command the German forces in the Bavarian Alps. He commanded the forces of the very few Waffen-SS men that had left.

Gottlob Berger was captured by the U.S. troops in Bavaria in May 1945, after he surrendered himself. He was included in the Ministries Trials during the Nuremberg Trials. It was the eleventh of the twelve total trials. His trial began in January 1948 and ended in April 1949.

He was sentenced to 25 years in prison after he was indicted on eight charges. However, his sentence was reduced to 10 years. But he was released from the prison much earlier, in December 1951, after six and a half month of custody.

Gottlob Berger married Maria Dambach in 1921 and the couple had four children together. The locations of his wife and children remained unknown.

Following his release from the prison, Gottlob moved to his native place Wurttemberg and began working as a manager in a curtain rail factory. He also wrote articles for a right-wing magazine called Nation Europa.

See the events in life of Gottlob Berger in Chronological Order 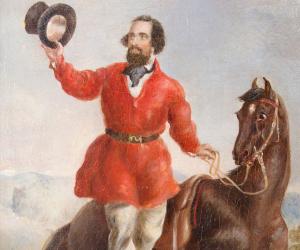