Ram Dass was an American spiritual teacher who did not follow any particular religion in his early years. After gaining a PhD in psychology from ‘Stanford University,’ he served as an assistant professor of psychology at ‘Harvard University.’ At ‘Harvard,’ he came into contact with Timothy Leary, with whom he carried out extensive research on the effects of hallucinogenic drugs such as LSD. He was dismissed from ‘Harvard’ due to the controversial nature of his work. His quest for spirituality took him to India, where he met Neem Karoli Baba, whom he later adopted as his guru. His guru gave him the name “Ram Dass,” meaning “servant of God” and had a lasting influence on his life. Ram Dass founded the ‘Hanuman Foundation,’ which initiated the ‘Prison-Ashram Project.’ The project encouraged convicts to turn to meditation and spirituality. He was also a co-founder of various other foundations, such as the ‘Living/Dying Project’ in Santa Fe, New Mexico, which helped people to die consciously. Ram Dass openly talked about his bisexuality and said that he preferred to have no family ties that would influence his work. He suffered a stroke that left him with expressive aphasia, which he attributes to the will of God. In his later days, he lived in Maui, an island in Hawaii, where he conducted retreats and preaches through the internet. American Celebrities
American Men
Wesleyan University
American Spiritual & Religious Leaders
Aries Men
Childhood & Early Life
Ram Dass was born Richard Alpert, on April 6, 1931, in Newton, Massachusetts, US, to Jewish parents. His father was a lawyer and an active fundraiser for Jewish causes. His father was also one of the founders of the ‘Albert Einstein College of Medicine’ and ‘Brandeis University.’
Alpert considered himself an atheist during his younger days and did not profess any religion. He graduated from the ‘Williston Northampton School’ in 1948 and went on to complete his BA degree from ‘Tufts University.’ He then completed his master’s degree from ‘Wesleyan University’ and earned a doctorate degree in psychology from ‘Stanford University.’
After completing his PhD, he taught at ‘Stanford University’ for a year and went on to practice psychoanalysis. 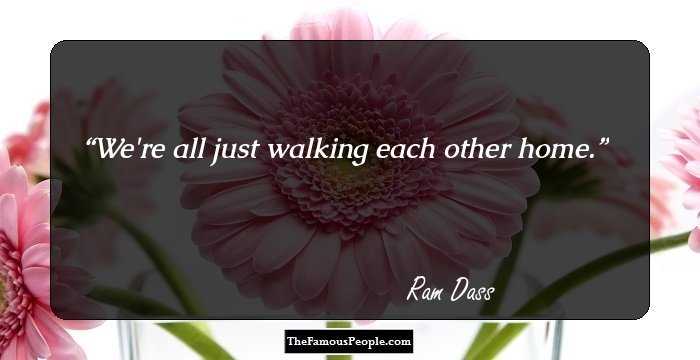 The Sexiest Men Of 2020, Ranked
Career
Ram Dass started teaching as an assistant professor of psychology at ‘Harvard University’ in 1958. He worked in the ‘Social Relations Department,’ the ‘Psychology Department,’ the ‘Graduate School of Education,’ and the ‘Health Service.’ He became a therapist and specialized in motivation and personality development. He published his first book, ‘Identification and Child Rearing,’ in 1962.
He met Timothy Leary at ‘Harvard’ and joined him in his research to study the therapeutic effects of hallucinogenic drugs such as LSD and psilocybin. The duo co-founded the ‘International Federation for Internal Freedom’ (IFIF) in 1962, a non-profit institution geared toward the study of the spiritual use of psychedelic drugs. His exploration of human consciousness led him to collaborate with Ralph Metzner, Allen Ginsberg, and Aldous Huxley. His work with Timothy Leary became highly controversial at ‘Harvard.’
He worked under David McClelland at the ‘Center for Research in Personality’ and assisted Walter Pahnke of ‘Harvard Divinity School’ in his ‘Good Friday Experiment’ in 1962, which was the first study on the mystical experience of drugs.
Alpert and Leary moved to the ‘Hitchcock Estate’ in Millbrook, New York, in 1962 and started a communal group with their followers and former ‘Psilocybin Project’ members at the estate. The new organization, known as the ‘Castalia Foundation,’ aimed at cultivating divinity within each person. The foundation hosted retreats where individuals paid to undergo psychedelic experiences through yoga and meditation, without the help of drugs.
He co-authored several books and delivered lectures that included talks at the ‘League for Spiritual Discovery’s center in Greenwich Village, in 1967. He traveled to India the same year and met Neem Karoli Baba, also known as “Maharaj-ji,” at ‘Kainchi Ashram.’ Neem Karoli Baba became his guru. Alpert was given the name “Ram Dass,” meaning “servant of God,” by his guru, who had a lasting influence on the rest of his life. He also interacted with the spiritual teacher Meher Baba, whom he has often mentioned in his books.
He returned from India and stayed at the ‘Lama Foundation’ in Taos, New Mexico, where he co-founded a countercultural spiritual community and an ashram. He presented the manuscript of his book, ‘From Bindu to Ojas,’ which was published as ‘Be Here Now’ in 1971 and became a bestseller. The book describes his spiritual journey and recommends techniques of attaining spirituality. The proceeds of the book were donated to the ‘Lama Foundation.’
He founded the ‘Hanuman Foundation,’ which initiated the ‘Prison-Ashram Project.’ The project encouraged convicts to turn to meditation and spiritual teachings to change their lives for the better. He was also a co-founder of various other foundations, such as the ‘Seva Foundation,’ which aimed to help the blind in India, Nepal, and other developing countries. He was part of the ‘Living/Dying Project’ in Santa Fe, New Mexico, which supported people to die consciously.
He experimented with a panoramic array of spiritual practices, such as devotion to Hindu gods and goddesses (“bhakti”), yoga of the mind and body, Buddhist meditation in the Theravadin, Mahayana practices, Zen practices, Sufism, and Jewish mystical studies.
He began exploring his ancestral Jewish faith at the age of 60, with the belief that there must be a reason for him to be born a Jew. He holds retreats and makes public appearances to give talks on spiritualism, which he describes as the purpose of his life. He also spreads his message through webcasts.
Continue Reading Below
His book ‘Be Here Now’ is a blend of Eastern and Western philosophies and appeals to the present generation that is in search of spiritual peace. He also started a radio program known as ‘Here and Now with Ram Dass,’ to reach out to a larger section of followers.
He released his memoir and a summary of his teachings, ‘Polishing the Mirror: How to Live from Your Spiritual Heart,’ at the age of 82. He believed he had achieved his purpose on this planet and is ready for the end, whenever it comes. 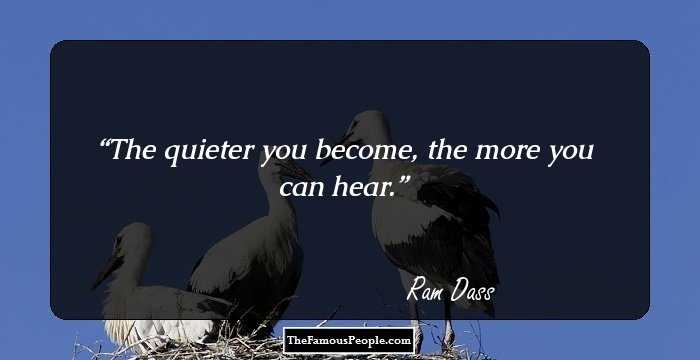 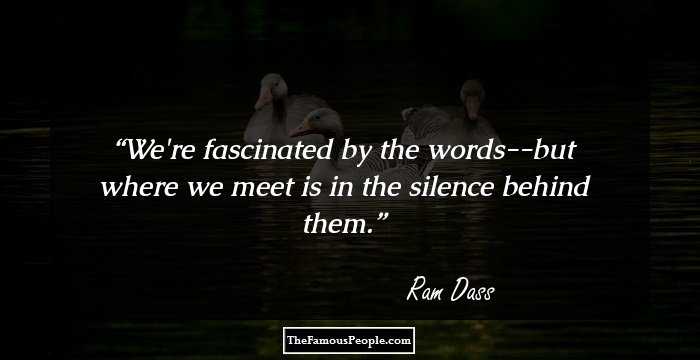 Personal Life & Legacy
Ram Dass openly talked about his bisexuality. He preferred to have no family ties that may influence his work. At the age of 78, he learnt that he had a son from a brief affair with a fellow graduate named Karen Saum during his days in ‘Stanford University.’ This was revealed when his son, Peter Reichard, took a DNA test. Ram and Peter came together 53 years after Peter’s birth and kept in touch since then.
In 1997, he suffered a stroke that left him with expressive aphasia, which affected his speech and the left side of his body. However, his mind was as active as it was prior to the stroke. He believed his stroke was an act of God to prepare him for more difficult things in life. From 2004 till his death, he lived on Maui, in Hawaii, since 2004 and did not move out much.
His health and his financial condition both deteriorated with time. However, he continued to preach and write books to spread his message.
Ram Dass died on 22 December 2019, at at his home in Maui, Hawaii
Trivia
Ram Dass was dismissed from ‘Harvard’ for allegedly giving psilocybin to an undergraduate student.
He fell out with Leary in 1974 and reconciled with him in 1983, during a reunion at ‘Harvard’ that marked the 20th anniversary of their expulsion.

See the events in life of Ram Dass in Chronological Order