Advanced Search
Billy Graham is an American Southern Baptist evangelist, known for preaching the message of Christianity around the world. He was one of the leading preachers of Christianity in the 1900s. In his childhood, he was greatly influenced by an evangelist and decided to devote his entire life to the service of Christianity. He was baptized twice in his lifetime and after his graduation, he started spreading the message of his community to various sections of the society through revival meetings and crusades. His ideology and thinking have been appreciated as well as criticized by people around the world. With the demonstrated fragility of life, people turned to spirituality for comfort, and he illuminated their path. He established a professional ministry and expanded his community through various means of communication. He also contributed significantly to the Civil Rights Movement and Lausanne Movement. He has appeared on the Gallup organization’s list of most admired men and women a staggering 57 times! He is regarded by his contemporaries as a witty, non-judgmental, genuine, innocent and patient human being always working for the betterment of humanity. He is a religious icon for the future generations to follow because of his devotion towards the supreme power and teachings to live one’s life with peace and harmony. David Miscavige
DID WE MISS SOMEONE?
CLICK HERE AND TELL US
WE'LL MAKE SURE
THEY'RE HERE A.S.A.P
Quick Facts

awards: Big Brother of the Year Award for his work on behalf of children
- Templeton Foundation Prize for Progress in Religion
- Sylvanus Thayer Award for his commitment to

American Celebrities
American Men
American Spiritual & Religious Leaders
Scorpio Men
Childhood & Early Life
He was born on November 7, 1918 on a dairy farm near Charlotte, North Carolina, to William Franklin Billy Graham Senior, a businessman and farmer and his wife Morrow Coffee Graham. He was the eldest child of the family with two younger sisters and a brother.
In 1934, at the age of 16, he attended a series of revival meetings in Charlotte by an evangelist, Mordecai Fowler Ham, which changed his personality and he decided to commit his life to Christ.
He graduated from Sharon High School in 1936 and enrolled at Bob Jones College, Cleveland but left it after a few months. In 1937, he attended the Florida Bible Institute and graduated with a bachelor degree in theology in 1940.
In December 1938, he was baptized by the church's pastor, Rev. Cecil Underwood in Silver Lake. Later, he was ordained by Rev. Underwood and other local pastors as a Southern Baptist minister in the St. John's River Association.
In 1940, he enrolled at the Wheaton College, Illinois, and graduated with a bachelor’s degree in anthropology in 1943. 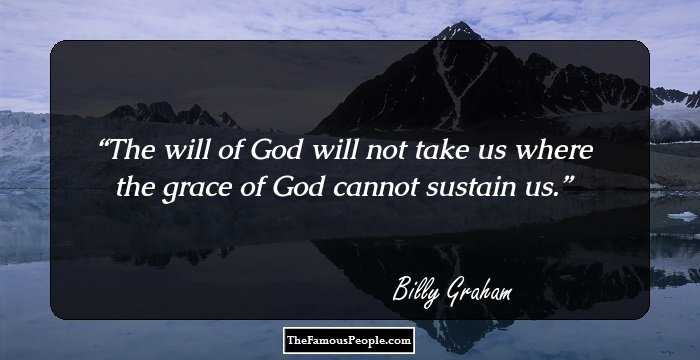 Quotes: God, Will
Continue Reading Below
Career
He served briefly as a pastor of the First Baptist Church in Western Springs, Illinois, in 1943-44. From 1948-1952, he served as the President of Northwestern Bible College in Minneapolis, Minnesota.
In 1949, a group called ‘Christ for Greater Los Angeles’ invited him to preach at their L.A. revival and people emerged in large numbers to witness this event. This extended the revival for an additional five weeks and with the heavy coverage from the wire services and newspapers, he became a national figure.
After the World War II, America’s cultural climate was under the threat of Communism. He preached against it and made evangelism a non-threatening and easy approach to overcome the fears of war and agony. People turned to spirituality for comfort and he became their leader and a ray of hope.
In 1950, he founded the ‘Billy Graham Evangelistic Association’ ministry along with his colleagues to expand their community.
He contributed significantly to the Civil Rights Movement and became one of the closest friends of Rev. Martin Luther King, Jr. He also held integrated crusades in Birmingham, Alabama, on Easter 1964 in the aftermath of the bombing of the Sixteenth Street Baptist Church.
He held evangelistic meetings on a number of college campuses—at the University of Minnesota in 1950-51, a 4-day mission at Yale University in 1957, and a week-long series of meetings at the University of North Carolina's Carmichael Auditorium in September 1982.
He led a series of meetings in the United Kingdom, called Mission England, where he used outdoor football grounds as venues in 1984. In 1991, he held his largest event in North America on the Great Lawn of New York's Central Park. 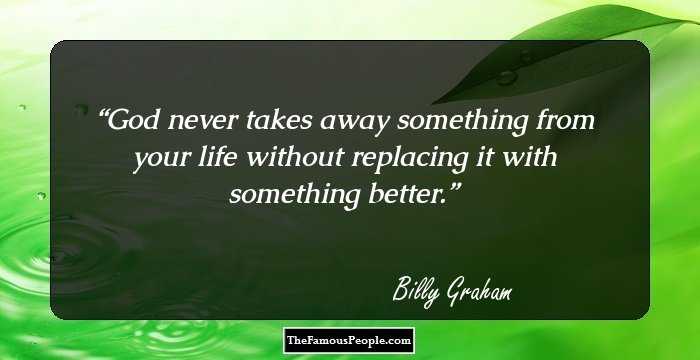 Quotes: Life, God, Never
Major Works
In 1950 he founded ‘Billy Graham Evangelistic Association’ (BGEA), a ministry to preach the gospel to a larger number of people around the world and encourage them to join their community. It included a radio program, television broadcasts and magazines. With the modernization of technology, it has also developed web portals for spreading the message of Christianity to the world.
Continue Reading Below
He has served as an active adviser to many presidents of America, from Harry S. Truman to Barack Obama. His views and ideologies on political affairs have been appreciated worldwide and influenced a lot of people and communities around the globe.
Awards & Achievements
In 1965, he was honored with the American Academy of Achievement's Golden Plate Award and Horatio Alger Award.
In 1967, he became the first Protestant to receive an honorary degree from Belmont Abbey College, a Roman Catholic school.
He was awarded the International Brotherhood Award from the National Conference of Christians and Jews in 1971.
He received the American Jewish Committee's First National Inter-religious Award and Southern Baptist Radio and Television Commission's Distinguished Communications Medal in1977.
He was rewarded with Presidential Medal of Freedom, the nation's highest civilian award, in 1983.
In 1989 Graham received a star on the Hollywood Walk of Fame.
He received the Ronald Reagan Presidential Foundation Freedom Award, for monumental and lasting contributions to the cause of freedom in 2000.
In 2001, he was awarded the Honorary Knight Commander of the Order of the British Empire (KBE) for his international contribution to civic and religious life for over 60 years. 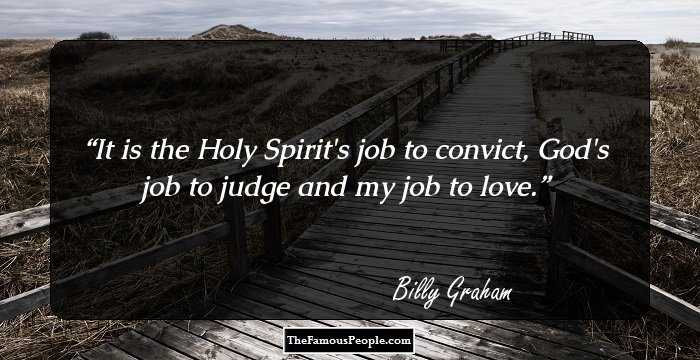 Quotes: Love
Personal Life & Legacy
He met Ruth McCue Bell, the daughter of a general surgeon, while studying at Wheaton College. They got married on August 13, 1943, after his graduation in anthropology.
They had five children together—Virginia Leftwich Graham, Anne Graham Lotz, Ruth Graham, Franklin Graham and Nelson Edman Graham—and 19 grandchildren and numerous great grandchildren.
Ruth died in 2007 due to pneumonia. She had been suffering from degenerative osteoarthritis for months before her death.
He has had Parkinson's disease since 1992 and also suffers from hydrocephalus, pneumonia, broken hips, and prostate cancer.

Quotes By Billy Graham | Quote Of The Day | Top 100 Quotes

See the events in life of Billy Graham in Chronological Order