(One of the Most Prominent Actors During Hollywood's Golden Age)

Advanced Search
Gwyllyn Samuel Newton Ford, popularly known as Glenn Ford, was a famous actor. Ford, who was prominent during the Hollywood Golden Age, had a career that lasted for more than 50 years. Born in Quebec, Canada, he began his career acting in West Coast stage companies. At the age of 23, he joined Columbia pictures. He made his film debut playing the lead role in the drama film 'Heaven with a Barbed Wire Fence', which was directed by Ricardo Cortez. Over the ensuing years, he played important roles in several films such as 'Gilda', 'A Stolen Life', and 'Blackboard Jungle'. His performance in the film 'Pocketful of Miracles', where he played the lead role, won him the Golden Globe Award for Best Actor. The film won as Oscar nomination as well. Ford's tremendous contribution to the industry earned him a star on the Hollywood Walk of Fame. He had received several other significant awards as well. After a long and highly productive career, he passed away at the age of 90 in his home at Beverley Hills. 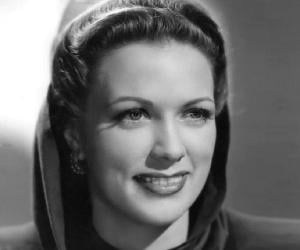 American Celebrities
Taurus Actors
American Actors
American Film & Theater Personalities
Taurus Men
Childhood & Early Life
Glenn Ford was born as Gwyllyn Samuel Newton Ford on 1st May 1916 in Sainte-Christine-d'Auvergne, Quebec, in Canada. His mother’s name was Hannah Wood and his father’s name was Newton Ford. He was distantly related to Sir John A Macdonald, Canada’s first Prime Minister, as well as Martin Van Buren, who was the eighth President of the United States.
Ford, at the early age of eight, moved to Santa Monica, California, in the United States along with his family. After completing his graduation from Santa Monica High School, he started performing with small theatre groups.
Continue Reading Below
Career
Glenn Ford began his career acting in West Coast stage companies. In 1939, he joined Columbia pictures. He made his film debut with the drama film 'Heaven with a Barbed Wire Fence'. Directed by Ricardo Cortez, the film starred him in the main role. Ford's performance in the film earned him the attention of renowned director John Cromwell, who cast Ford in the 1941 film 'So Ends Our Night' in a significant role.
Over the ensuing years, he appeared in several other films such as 'Convicted Woman' (1940), 'The Lady in Question' (1940), 'Go West, Young Lady' (1941), and 'The Desperadoes' (1943).
During the time of the World War II, he appeared in a few war movies such as ‘Flight Lieutenant' (1942), where he portrayed a young pilot. In 1943, he appeared in the war drama 'Destroyer' in a major role along with Edward G. Robinson. The film starred them as U. S. Navy sailors in World War II.
He played an uncredited role in the film 'Guadalcanal Diary', which focused on the fight of the United States Marines in the Battle of Guadalcanal.
During the war years, Ford volunteered for the United States Marine Corps Reserve, though he didn't get to experience combat duty as he had hoped for. However for his three years of service, he was awarded with the American Campaign Medal, the Asiatic-Pacific Campaign Medal, and the World War II Victory Medal.
In 1946, he portrayed a young thug in the American film 'Gilda'. The film, which was directed by Charles Vidor, became one of the most memorable works in his film career.
Over the years, he gave several brilliant performances. He appeared in 'A Stolen Life', a 1946 film, directed by Curtis Bernhardt, where he portrayed the love interest of the main character. In 1948, he played the lead role in Henry Levin's romantic comedy 'The Mating of Millie', opposite Evelyn Keyes. Some of his other significant films include 'The Man from Colorado' (1948), 'Lust for Gold' (1949), 'Follow the Sun' (1951) and 'Affair in Trinidad' (1952).
In 1955, he gained appreciation for his work in the Oscar nominated film 'Blackboard Jungle' which was directed by Richard Brooks. The film also did well commercially. The same year, he played the lead role in another hit film 'Interrupted Melody' which was directed by Curtis Bernhardt. The film was a commercial success and also won an Oscar.
His versatile and amazing acting skills earned him important roles in several other significant films in the next two decades including 'The Teahouse of the August Moon' (1956), 'The Gazebo' (1959), ‘Pocketful of Miracles’, (1961), 'Love is a Ball' (1963), 'The Last Challenge' (1967), and 'Midway' (1976). He played a supporting role in the 1978 hit film 'Superman', which was based on the popular DC comics superhero of the same name.
Continue Reading Below
During the 1970s, he played supporting roles in various TV shows like ‘Cade's County’ (1971-72) and 'The Family Holvak (1975–1976). He also appeared in several TV films like 'Jarrett' (1973), ' Evening in Byzantium' (1978) and 'The Gift' (1979). His last appearance on the big screen was in the 1991 film named 'Raw Nerve' which was directed by David A. Prior.
Major Works
‘Gilda,’ a 1946 crime drama directed by Charles Vidor, is one of Glenn Ford’s most memorable films. He played the lead role of a gambler going through difficulties. Other actors in the film included Rita Hayworth, George Macready, Joseph Callela and Steven Geray. The film received mostly positive reviews from critics.
‘Interrupted Melody’, a 1955 biographical musical film, is one among Ford’s most successful films. The film, which was directed by Curtis Bernhardt, starred Ford in the lead role, along with actors Eleanor Parker, Roger Moore, Cecil Kellaway and Peter Leeds. The film was nominated for three Oscars, out of which it won one.
Another one of his most significant works was his role in the 1978 superhero film ‘Superman’, where he played the foster father of the titular character. Directed by Richard Donner, the film was based on the popular DC Comics superhero Superman. The film focused on the origin, birth, and early life of Superman, and how he later fights evil, disguised as a mild reporter named Clark Kent. It was the most expensive film up to that time. It was commercially successful as well.
Awards & Achievements
Glenn Ford won the Golden Laurel Award for Top Male Comedy Performance for his role in ‘Don't Go Near the Water’ in 1958.
He won the Golden Globe Award for ‘Best Actor- Comedy or Musical’, for his brilliant performance in the 1961 film ‘Pocketful of Miracles’.
He was honored with the Donostia Award at the San Sebastian International Film Festival in 1987.
Personal Life
Glenn Ford’s first wife was Eleanor Powell, an actress and dancer. They got married in 1943 and had one child, Peter Ford. The couple divorced in 1959.
He married three more times. His all subsequent marriages to Kathryn Hays (1966–1969), Cynthia Hayward (1977–1984), and Jeanne Baus (1993–1994) ended in divorce.
He suffered from a series of minor strokes during the later years of his life due to which his health deteriorated. He finally passed away on 30th August 2006 at the age of 90, in his home in Beverley Hills, California.

See the events in life of Glenn Ford in Chronological Order