Giuseppe Fortunino Francesco Verdi was an Italian romantic composer who is regarded as one of the most influential composers of the 19th century. He concentrated more on composing operas, most of which are still performed in opera houses throughout the world. His works reflected the popular culture of his time and they are still adored and revered by musicians all over the world. Being an amazingly talented music enthusiast, his works were noted for the musical luster they embodied. Verdi’s compositions were influenced by great musicians like Gaetano Donizetti, Saverio Mercadante, Rossini, Bellini and Giacomo Meyerbeer. Lacking any strong schooling in the discipline of music, his achievements were purely out of his strong innate taste for music. Verdi himself had said that "Of all composers, past and present, I am the least learned."He used to be very intimately involved with each and every stage of the creation of his operas and portray his characters quite incisively, which was probably the reason why his plays received immense popularity and appreciation. He enriched the music world with his masterpieces like ‘Requiem’ (1874), ‘Otello’ (1887)’, and ‘Falstaff’ (1893). Even to this day his works remain extremely popular, and the bicentenary of his birth in 2013 was celebrated worldwide with several broadcasts and performances.
Continue Reading Below Italian Celebrities
Aries Musicians
Male Composers
Male Musicians
Italian Composers
Childhood & Early Life
Giuseppe Verdi was born to a family of innkeepers on 9 October 1813, in Le Rancole, a village near Bussetto. His parents were Carlo Giuseppe Verdi and Luigia Uttini. He also had a younger sister, Giuseppa, who passed away at the age of 17 in 1833.
Verdi became associated with their local church at the tender age of seven, serving in the choir, acting as an altar boy, as well as well as taking organ lessons.
He was enrolled by his parents in a school, when he was ten, but he returned to Bussetto every Sunday to play the organ, by covering several kilometers of distance on foot. When he was 13, he was asked to act as a replacement in the first public event that took place in his home town. He played his own music, and his performance was a great success, earning him much local recognition.
After completing his studies, he set his sights on Milan, where he was introduced to an amateur choral group, ‘Società Filarmonica’, which was led by Pietro Massini. He attended the Societa frequently. Later, he got an opportunity to function as rehearsal director and continuo player for an opera by Giaochino Rossini, which proved to be the turning point in his career. It was after this, that he wrote his first opera, which was titled ‘Rocester’. 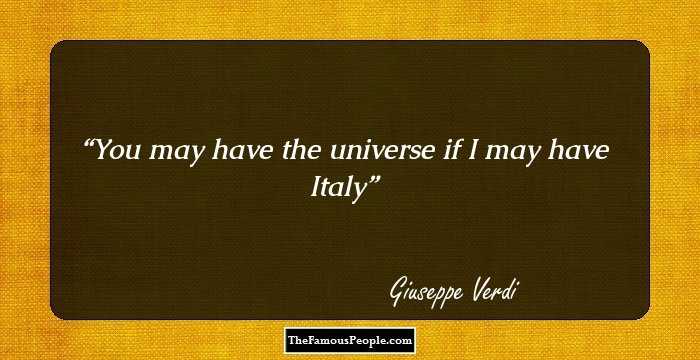 Famous Beautiful Women With Green Eyes
Career
Giuseppe Verdi was composing his second opera ‘Un giorno di regno’ when his wife passed away at just the age of 26, because of encephalitis. His work was premiered shortly, after but it turned out to be a flop, which led Verdi into a state of depression.
He started composing again, and began to work on the music for ‘Nabucco.’ It was first performed on 9 March 1842, and its success made Verdi a new hero of Italian music. It became so successful and popular that within a decade it reached as far as Petersburg, Russia and Buenos Aires, Argentina.
Following the success of ‘Nabucco,’’ he settled in Milan, where he became acquainted with several influential people. Later, he wrote, ‘I Lombardi alla Prima Crociata’, based on an epic poem by Tommasso Grossi. It was dedicated to Margia Luigia, the Habsburg Duchess of Parma, who died shortly after the premier in 1843.
Verdi took on Emanuele Muzio, a junior, as his only pupil. Shortly, as he grew close to Verdi, he became indispensable. He used to assist Verdi in preparing scores, transcriptions, and in conducting many of his works in the USA and places outside of Italy.
’Rigoletto’ (1851), ‘II trovatore’ (1853), ‘La traviata’ (1853), and ‘Don Carlos’ (1867) were some of his successful and popular works. In 1874, he completed ‘Messa da Requiem’, which was also a huge success.
Having become an international celebrity, he devoted himself to creating new works for the Opera at Paris, as well as other theatres. ‘Les Vepres siciliennes’ (The Sicilian Nespers, 1855), ‘Simon Boccanegra’ (1857), and ‘Un ballo in Maschera’ (A masked ball, 1857), were three of his most popular works during that time.
Later, he wrote ‘Macbeth’ based on Shakespeare’s drama of the same name, which was best known for its originality, and for being independent of tradition.
Verdi challenged Giacomo Meyerbeer, a European composer much more renowned and wealthier, whom he surpassed with ‘Don Carlos’ (1884), a work regarded by many as a masterpiece.
He had plans to retire in the mid 1880s but because of a connection initiated by longtime friend Giulio Ricordi, Verdi along with Arrigo Boito, a well known composer and novelist, started to work on ‘Otello’. It was completed in 1886, and was premiered on 5 February 1887 at Teatro alla Scala. Not only was it met with incredible acclaim throughout Europe, but the opera is also regarded as one of the best operas ever written.
Continue Reading Below
After the success of ‘Otello’, Verdi started writing ‘Falstaff.’ It was first premiered on 9 February 1893 at La Scala, in which influential figures including aristocrats and critics from all over Europe were present. The performance needless to say, was a huge success.
During his last years, Verdi got involved in several philanthropic ventures, which included publishing a song for the welfare of the earthquake victims in Sicily in 1894, as well as building rest houses for retired musicians and hospitals. 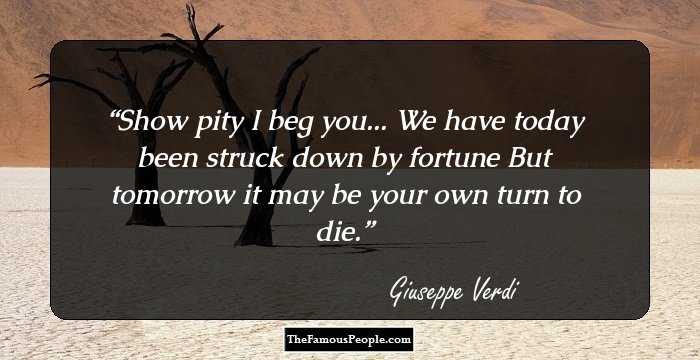 Quotes: I
Major Works
The ‘Messa da Requiem’ which he composed in memory of Italian poet Alessandro Manzoni is one of the most frequently performed major choral works composed since the compilation of Mozart's Requiem. It continues to be popular to this day and is regularly performed in choral societies.
His ‘Otello’, an opera in four acts set to an Italian libretto by Arrigo Boito, based on Shakespeare's play ‘Othello’ is counted amongst his best works. The opera was a grand success upon its Milan premier in 1887 and was soon staged at leading theatres throughout Europe and America.
Awards & Achievements
Verdi was awarded the Order of Chevalier of the Legion of Honour in 1894.
Personal Life & Legacy
His first wife was Margherita, whom he married in 1836. Two children were born to them in quick succession. Their happiness however was short-lived as both the children died early. To add to Verdi’s tragedies, Margherita too died young after suffering from encephalitis.
Several years later, Verdi married Giuseppina Strepponi in 1859, after a long time of cohabitation. She was quite a loving and supportive wife, who supported him in every way possible.
He had a stroke while he was in Milan in early 1901, which led to his death six days later on 27 January 1901 at the age of 87. His funeral was attended by musicians from all over Italy.
Trivia
Verdi’s operas are full of catchy tunes. Many people would be familiar with some of these tunes, even if they don’t know opera or don’t listen to classical music.
He liked Shakespeare, which is why some of his operas, ‘Macbeth’, ‘Otello’, and ‘Falstaff’ are all based on Shakespeare’s plays.
Verdi’s funeral was attended by more people than any other event in the history of Italy.
He was buried along with his second wife in the very house that he had founded for retired musicians.
You May Like

See the events in life of Giuseppe Verdi in Chronological Order