Gina Rodriguez is an American actress who gained immense popularity for her role in the ‘CW’ series ‘Jane the Virgin.’ Rodriguez’s attractive personality and great acting skills had ‘The Hollywood Reporter’ describing her as the ‘Next Big Thing’ and listing her in ‘Top 35 Latinos Under 35.’ She also has been named by the ‘Time’ magazine as one of the 100 most influential people in the world. Rodriguez did complete justice to her character, Jane, a young woman who is accidentally inseminated through artificial insemination. Being a role model for Latino women, Rodriguez has stood firmly in support of her ancestral community. In fact, she has a tendency to choose her roles carefully, keeping in mind how her roles might have an impact on her community. She also actively participates in the activities of the Hispanic community and devotes time to work towards strengthening the position of Latino women in society. Rodriguez impressed her fans with her musical skills when she played the role of ‘Majo Tenorio’ in ‘Filly Brown,’ the movie which proved to be a milestone in her career. She penned down her father’s words of wisdom in a book named ‘I Can and I Will: Tools My Daddy Gave Me.’ 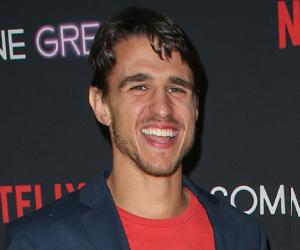 Gina Rodriguez was born on July 30, 1984, in Chicago, Illinois, USA, to Magali and Genaro Rodriguez, who are of Puerto Rican origin. Her father was a boxing referee by profession. Rodriguez is the youngest of three sisters in the family.

A 7 year old Gina started performing as a dancer with the local salsa group ‘Fantasia Juvenil.’ She worked for other companies too, like the ‘Los Soneros Del Swing’ and performed in Chicago, California, New York, and Puerto Rico during the ‘Salsa Congress’ events. She attended ‘St. Ignatius College Prep.’

When Gina was sixteen, she became one of the thirteen teenagers who were accepted into a program called ‘Theatrical Collaboration’ by the ‘Columbia University.’ Taught by Richard Niles, Gina was given an opportunity to write, direct, and perform original work with twelve other teenagers from across the globe.

After gaining admission to ‘Tisch School of the Arts,’ she decided to channelize her energy into honing her acting skills by performing in theatre.
For the next four years, Gina underwent rigorous training in theatre at the ‘Atlantic Theatre Company’ and ‘Experimental Theatre Wing’ where she learnt under the expert guidance of professors like Rosemary Quinn and worked with David Mamet and William H. Macy.
Continue Reading Below
You May Like

The Hottest Male Celebrities With The Best Abs
Career
Soon after graduating, Gina Rodriguez got her first role in ‘Tiny Dancer.’ She then played the role of ‘Frida Kahlo’ at the ‘American Stage Theatre’ in a play titled ‘The Last Moments in the Life of Frida Kahlo.’
Rodriguez’s career started taking stride when she was cast in the shows, ‘Jonny Zero,’ ‘Army Wives,’ and ‘Law and Order.’ Her performance in the short film ‘Osvaldo’s’ gained her immense recognition at several film festivals.
She started portraying ‘Beverly’ in the soap opera series, ‘The Bold and the Beautiful’ in 2011.
Gina played the lead role in the feature film ‘Go for It!,’ where she portrayed a dancer juggling between her career and family. In 2011, she also played ‘Rita’ in the sitcom television series ‘Happy Endings,’ and ‘Elvia’ in the drama series ‘The Mentalist.’
She played a recurring role in the web series ‘Eden's Court’ and appeared in three episodes of a TV series titled ‘No Names.’ Her first studio film was ‘Our Family Wedding’ where she appeared alongside America Ferrera.
Gina Rodriguez made guest appearances on television shows, such as ‘The Mentalist,’ ‘Happy Endings,’ and ‘10 Things I Hate About You.’
In 2013, she was featured as a young rap artist in the film ‘Filly Brown’ alongside Jenni Rivera, Lou Diamond Phillips, and Edward James Olmos. She was offered the role after an impressive rap performance at the audition. Her powerful performance in the film increased her popularity as an actor. Through collaborations with music producers E Dub and Khool-aid, five original songs were composed for the film.
‘Filly Brown’ received admiration from the film fraternity and after it’s screening at the ‘Sundance Film Festival,’ Rodriguez’s career graph started moving northward. Though she was offered various roles at the time, she picked her roles carefully.
Though she got the opportunity to appear on Marc Cherry's TV series ‘Devious Maids,’ she rejected the offer as she was not happy the way the Latino culture was presented in the series.
Continue Reading Below
In the dark comedy ‘Sleeping with Fishes,’ written and directed by Nicole Gomez Fisher, Rodriguez was seen in the lead role of ‘Alexis Rodriguez Fish.’ Fish was depicted as someone whose cheating husband dies followed by her return to her family.
Rodriguez’s lead role as ‘Jane Villanueva,’ in her favorite project ‘Jane the Virgin,’ surfaced on TV during the fall of 2014. Speaking to ‘Vanity Fair,’ Rodriguez expressed her love for the character. The series is based on the Venezuelan soap ‘Juana le Virgen’ which unveils the events in the life of a young virgin who is accidentally inseminated.
In 2017, she voiced a character named Mary in the computer-animated Christian comedy film ‘The Star,’ which was directed by Timothy Reckart. The film, which was released on November 17, 2017, in the US by ‘Columbia Pictures,’ went on to receive many nominations at various award ceremonies.
It was announced in 2018 that Rodriguez would be producing and starring in a ‘Netflix’ romantic comedy film titled ‘Someone Great.’ Directed by Jennifer Kaytin Robinson, the film was released on April 19, 2019.
She was cast to voice the title role in Netflix’s animated series ‘Carmen Sandiego’ which premiered on January 18, 2019.
She also starred in the action thriller film ‘Miss Bala’ in 2019. In the same year, she was cast to play an important role in a science-fiction film titled ‘Awake.’
Major Works
‘Filly Brown,’ illustrating the ups and downs in the life of a young rap artist played by Rodriguez, remains her most admired film. Her work in ‘Go for It!’ is also worth a mention.
The series ‘Jane the Virgin,’ which ran successfully from 2014 to 2019, received appreciation from fans and critics.
Awards & Achievements
During the early years of her career, her short film ‘Osvaldo’s’ was accepted at many film festivals like the ‘ABFF,’ ‘NY HBO Latino Film Fest,’ ‘Chicago International Film Fest,’ and ‘Urbanworld Film Festival.’ Rodriguez was announced as the winner of the ‘Best Actor’ award at the ‘First Run Film Festival’ in New York. The film was also chosen as one of the ‘Five Best Shorts’ and was telecast on ‘HBO’ in 2010.
Rodriguez was nominated for an ‘Imagen Award’ in 2011 for the film ‘Go for It!’ She finally received the award for her performance in ‘Filly Brown’ under the category, ‘Best Actress in a Feature Film.’ At the ‘First Run Film Festival’ in New York, she was awarded the ‘Best Actor’ award. She also won the ‘Inaugural Lupe Award’ on 9 June 2013.
For her role in ‘Jane the Virgin,’ she received the prestigious ‘Golden Globe’ award in 2015. She was nominated for the award in 2016 and 2017.
Personal Life & Legacy
The actress has two older sisters, Ivelisse Rodriguez Simon and Rebecca. Ivelisse is an investment banker. During her speech at the ‘Golden Globe,’ Rodriguez had referred to her siblings as her “biggest role models.”

She met Joe LoCicero on the sets of ‘Jane the Virgin,’ and started dating him in 2016. In August 2018, during an interview with ‘Us Weekly,’ she confirmed her engagement to him. The couple got married on May 4, 2019. In July, 2022, Gina and Joe announced that they were expecting their first child together.

Trivia
Rodriguez had a great struggle after she was diagnosed with thyroid at 19 years of age.
The actor is a staunch supporter of the Latino community and is associated with the ‘National Hispanic Foundation.’
‘We Will Foundation,’ established by Rodriguez, aims to empower young Hispanic women through scholarships.

See the events in life of Gina Rodriguez in Chronological Order