George Kennedy was an American film and TV actor, who is remembered for his versatile characters. His muscular physique and grumpy appearance, topped with a deep baritone voice, initially made him perfect for roles of antagonists. However, George displayed his versatility in 'Cool Hand Luke,' the film that earned him his only ‘Academy Award.’ Later, George brought more variations to the characters he played. He is considered one the very few actors who had had a smooth transition from being typecast as “villains” to playing “good guys.” The transition even raised his pay. His decade-long distinguished career is decorated with several arcs. His roles range from those of blue-collar antagonists to dependable sidekicks, in projects covering Westerns, disaster movies, horrors, thrillers, and comedies. George had served in the military for over a decade which, however, never interrupted his acting career. His experience in the military helped him build an enormous frame, which later became his weapon to terrorize leads such as Cary Grant, Paul Newman, and Clint Eastwood on screen. Later in his career, he did a few voiceovers, too. George had married three different women. Even though he had died of heart disease, his close friends later revealed that he had been deeply affected by the loss of his third wife, who had died less than 6 months earlier. American Celebrities
American Men
New Yorkers Actors
Tall Celebrities
Tall Male Celebrities
Childhood & Early Life
George Harris Kennedy Jr. was born on February 18, 1925, in New York City, to George Harris Kennedy and Helen A. He initially attended 'WC Mepham High School' in Bellmore, New York, and then graduated from 'Chaminade High School' in Mineola, New York, in 1943.
George then attended the 'John Tarleton Agricultural College' (now 'Tarleton State University,' Stephenville, Texas) under the 'Army Specialized Training Program' (ASTP). The program was, however, canceled in 1944, as the unit was called for military service.
George was 2 when he made his stage debut with a touring company of 'Bringing Up Father.' By 7, he became a New York City radio DJ.
He started his military service during World War II and eventually became a captain. He initially served in Europe. He then fought in the Battle of the Bulge, was re-enlisted, and then earned a commission. He also served the 'Armed Forces Radio Network' in Germany, Japan, and Korea. However, after 16 years of service, he had to retire in the late 1950s due to a back injury. 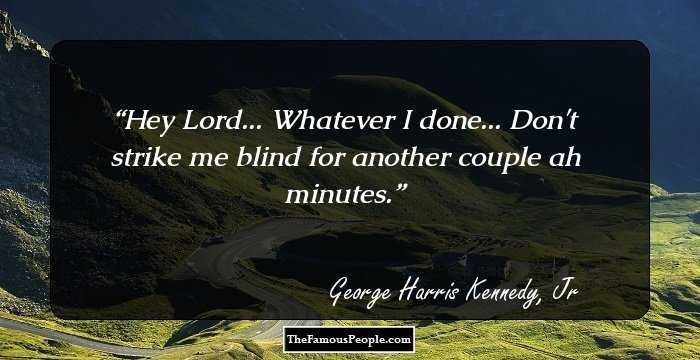 Continue Reading Below
Career
George made his acting debut in 1956, with a recurring role in the 'CBS' sitcom 'The Phil Silvers Show.' Initially, he was the technical and military advisor of the crew. George coincidently got the role of ‘MP Sergeant Kennedy’ when the featuring actor failed to show up. In the subsequent years, he mostly made single-episode appearances on TV shows.
His first film appearance was as ‘Nathan Dillon’ in the 1961 ‘DeLuxe Color' production 'The Little Shepherd of Kingdom Come.' One of his earlier notable performances was as a hook-armed antagonist named ‘Herman Scobie’ in the 1963 romantic comedy/mystery 'Charade.' It was one his personal favorites, too.
George won the 'Academy' and the 'Laurel' awards and a 'Golden Globe' nomination for essaying the supporting character of the chain-gang convict ‘Dragline’ in the 1967 prison drama 'Cool Hand Luke.'
In the 1960s, George worked in many TV Westerns and played seven different characters in different episodes of 'Gunsmoke.' In the 1970s, he played the iconic cigar-smoking mechanic ‘Joseph "Joe" Patroni’ in the first-ever air disaster drama 'Airport.' George was the only actor from the crew to reprise his character in the next three films of the series. Subsequently, George appeared in a few more disaster films, such as 'Earthquake' (as ‘Sergeant Lew Slade’).
In 1971, George starred as ‘Samuel Patrick Cavanaugh,’ a San Diego police detective sergeant, in the 'NBC' crime drama 'Sarge.' He also appeared in the lead role of ‘Officer Bumper Morgan’ in all the 24 episodes of the 'NBC' crime drama 'The Blue Knight' (1975). George essayed the main character ‘Ken Shuftan’ in the 1977 Japanese film 'Ningen no shōmei' ('Proof of the Man').
Toward the end of 1980, George started playing more positive characters. He even tried his hands in comedy films such as 'The Naked Gun: From the Files of Police Squad!' (1988, as ‘Captain Ed Hocken).’ He reprised the role in its two sequels, released in 1991 and 1994, respectively.
George was cast as ‘Carter McKay,’ a Colorado-based rancher, in season 13 of the 'CBS' soap opera 'Dallas.' He later played the character in the two TV movie versions of the show, aired in 1996 and 1998, respectively.
In the following decade, George appeared in a few multinational projects, such as the 1990 Korean movie 'Mayumi' (as a Bahraini investigator) and the 1991 Dutch film 'Intensive Care' (as ‘Dr. Bruckner’). He had previously featured in the Spanish–French film 'Esmeralda Bay' (1989).
Around the same time, he promoted 'Breathasure' tablets through radio and TV commercials. Toward the end of the decade, George lent his voice to the character ‘LB Mammoth’ in the 1997 musical animation ‘Cats Don't Dance' and the character ‘Brick Bazooka’ in the 1998 science fiction film 'Small Soldiers.'
Continue Reading Below
In 2003, after a long hiatus, he made a comeback to TV as ‘Albert Miller,’ the biological father of the popular character ‘Victor Newman’ in the 'CBS' soap opera 'The Young and the Restless.'
He also hosted eight episodes of the documentary show 'The Complete History of U.S. Wars 1700-2004.' He made a cameo appearance in the 2005 drama road movie 'Don't Come Knocking,' as a director of a Western.
George's final film appearance was in the 2014 crime drama 'The Gambler.' The film featured him as ‘Ed,’ the dying grandfather of the protagonist, ‘Jim Bennett,’ played by Mark Wahlberg. His scene lasted for less than 2 minutes.
George was honored with a “star” on the 'Hollywood Walk of Fame' on October 3, 1991.
George's first book, the murder mystery 'Murder on Location,' was released in 1983. Subsequently, he released 'Murder on High' (1984) and his autobiography, 'Trust Me' (2011). 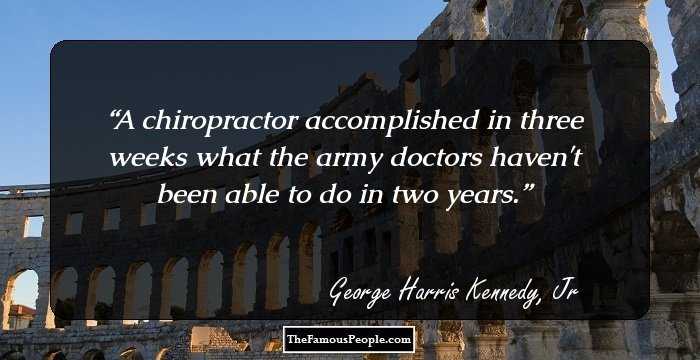 Family & Personal Life
George was just 4 when he lost his father, musician, orchestra leader, pianist, and composer-conductor at the 'Proctor's Theater' in Manhattan, George Harris Kennedy. His mother was a ballet dancer who performed with the vaudeville group of 'Le Ballet Classique.'
George first married ‘Women's Army Corps’-enlisted Dorothy Gillooly (1926–2012) and had one son, Kevin Kennedy. They got divorced in the 1950s.
In 1959, George married Norma Wurman (1929–2007). They had a son, Christopher, and a daughter, Karianna. They divorced in 1971 but remarried in 1973, only to divorce again in 1978.
Continue Reading Below
George then married Joan McCarthy that year, and they remained together until her death in September 2015. Among their three adopted children, one is the actor Betty Kennedy. Their daughter, Shaunna Kennedy, was a drug addict. Thus, George and Joan adopted Shaunna’s daughter, Taylor, too.
George was an aviator and owned a 'Cessna 210' and 'Beechcraft Bonanza.'
In 2002, he had undergone an emergency triple bypass surgery. He made only occasional appearances in films after that. He died on February 28, 2016, due to heart failure, at an assisted living facility in Middleton, Idaho.
At the time of his death, George was the oldest-living ‘Best Supporting Actor’ 'Academy Award'-winner, and the title was later passed on to Martin Landau. His day of death coincided with the 88th 'Academy Awards' ceremony.
Trivia
George is often mistakenly credited for a brief role in the 1960 epic historical movie 'Spartacus,' which was actually played by stuntman Bob Morgan, who had a striking resemblance to him.
In the 1970s, ‘Paramount Pictures’ had plans to remake the 1944 film ‘Double Indemnity.’ Kennedy was considered for the role of ‘Barton Keyes,’ which was originally played by Edward G Robinson.
He was also considered for the role of ‘Lex Luthor’ in 'Superman' (1978), which was eventually essayed by Gene Hackman.
The creators of the 1980 American satirical film 'Airplane!' (Inspired by 'Airport') approached George to play a bumbling plane dispatcher. He turned down the offer, as he "couldn't kill off his Airport cash-cow." The role was later played by Lloyd Bridges. 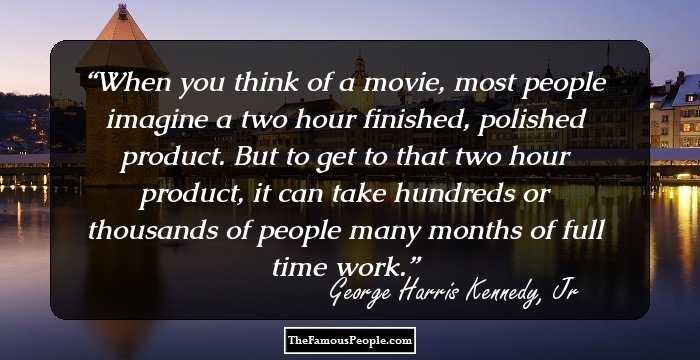 Quotes By George Kennedy | Quote Of The Day | Top 100 Quotes

See the events in life of George Kennedy in Chronological Order