(Northern Irish Professional Footballer Who Played as a Winger)

George Best was arguably one of the most talented footballers of his era who captivated his fans with his extraordinary skill, agility and flair. Since his childhood, he nurtured a single-minded love for football. At the tender age of 15, his raw talent caught the eye of ‘Manchester United’ scout Bob Bishop, who was convinced about George’s potential. Before long, George Best started playing for ‘Manchester United’ and immediately endeared himself to the club’s fans with his fast and attractive style of playing. What followed was four glorious seasons for both Best and his club, during which the team won a host of trophies. Best forged a deadly partnership with Denis Law and Bobby Charlton, the two other ‘Manchester United’ greats and reached the zenith of his career when he led his club to a European Cup triumph. Among the three, Best was considered to be the most gifted. He was certainly the most flamboyant but his hedonistic attitude and his overwhelming success did not help as he began a downward spiral into debauchery and decadence, effectively ending his career as a player. Throughout his shenanigans, he adopted an air of nonchalance and disarming honesty. He lived a similar lifestyle right till his last days and the greatest heartache for his fans was the fact that he could have accomplished so much more on the field. Pep Guardiola
DID WE MISS SOMEONE?
CLICK HERE AND TELL US
WE'LL MAKE SURE
THEY'RE HERE A.S.A.P
Quick Facts

Cause of Death: Complications From The Immunosuppressive Drugs

Northern Irish Celebrities
Gemini Football Players
Northern Irish Sportspersons
Northern Irish Football Players
Gemini Men
Childhood & Early Life:
George Best was born in Cregagh, Belfast, Northern Ireland to Dickie Best and Anne Best. His father was a member of the Orange Order, a Protestant fraternal organisation based in Belfast.
He loved football right from his earliest years and played for a local boys club in Cregagh.
In 1957, when he was 11 years old, he earned a scholarship to ‘Grosvenor High School’, where Rugby was the only sport played. Without football, he lost interest in studies as well and began to skip school, after which he was sent back to his old school, ‘Lisnasharragh Secondary’, where he could play football again.
He was noticed by the local club Glentoran, but did not get selected because of his small build. However, Bob Bishop, a scout for the English club ‘Manchester United’ was impressed by George and immediately took him to Manchester. 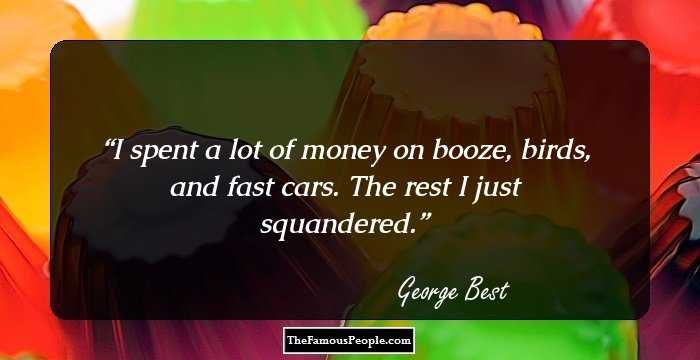 Quotes: Money, I
Continue Reading Below
Career
In 1961, George Best underwent a proper trial and was signed by Joe Armstrong, the chief scout at ‘Manchester United’.
After his arrival in Manchester, George became extremely homesick within just two days and returned to Cregagh. However, his father and the Manchester United coach at that time, Matt Busby, persuaded him to return to Manchester within two weeks.
At that time, English clubs were prohibited from taking Northern Irish players, due to which young George played for two years as an amateur. He worked at the ‘Manchester Ship Canal’ during this time and trained with the club two times every week.
In 1963, Best made his debut for ‘Manchester United’ against West Bromwich Albion at ‘Old Trafford’, United’s home stadium. He played very well and United won the match 1-0. By the end of that season, he had played in 26 matches and scored 6 goals.
In 1963, he played his first match for Ireland in the under-18 youth team. Soon, he made his debut for the senior team too, against England. Overall, he played 37 matches for Ireland and scored 9 goals.
In his first season, United did not win either the ‘First Division League Title’ or the ‘FA Cup’, but won the ‘FA Youth Cup’, in which he played.
In the next season of 1964-1965, he became a regular in the side and played most matches. That season, United won the league title and reached the semi-finals of FA Cup. Best’s contribution was 14 goals in 59 games.
In 1965, his performance in a European Cup match against Portuguese team ‘Benfica’ catapulted him to stardom. Having already scored two goals in the previous match against Helsinki, he scored two goals again.
In the next season of 1965-1966, Best further established himself as a great player. Scoring 17 goals in 43 matches, he formed a formidable partnership with 2 other players in the team – Bobby Charlton and Denis Law.
Continue Reading Below
In the season of 1966-1967, he was influential in helping the ‘Manchester United’ claim both their 7th league title and the charity shield, scoring 10 goals in 45 games.
The season of 1967-1968 was the most outstanding one of his career. He was highest scorer in the league, netting 28 goals in 41 games and carried United to second place, just two points behind winners ‘Manchester City’. His noteworthy performances include 2 goals against Liverpool and a hat-trick against Newcastle.
The same season, he played an important role for his team in the European Cup as well, which United won, becoming the first English team to do so. Best produced mesmerizing displays against Sarajevo, Real Madrid and the finalists Benfica.
In the 1968-1969 season, he continued his hot streak and scored 22 goals in 55 games. But, with the rest of the team not performing well, and the new players not up to the mark, United finished the season without any trophies.
Over the next three seasons, Best continued to play well but could not take United to their previous heights. Some of his best performances in this period include his 6 goals in a match against Northampton Town, hat-tricks against Southampton and West Ham United and a goal against Sheffield in which he went past 4 players with a solo run before scoring.
1970 onwards, he started getting entangled into a lot of discipline issues, such as being booked for misconduct, missing a match to spend a weekend with actress Sin�ad Cusack and again missing a whole week of training to spend time with Miss Great Britain. He started drinking a lot and even announced retirement twice, but returned to play both times.
Already on a sharp decline, the 1973-1974 season was Best’s last at United. Overall, he scored 179 goals in 470 games for United.
From 1975 to 1984, he signed for various clubs in different leagues, playing in South Africa, Ireland, US, Scotland and Australia. He even returned to England and played for Fulham for two years. He had troubles with his transgressions almost everywhere and never lasted more than two seasons anywhere. 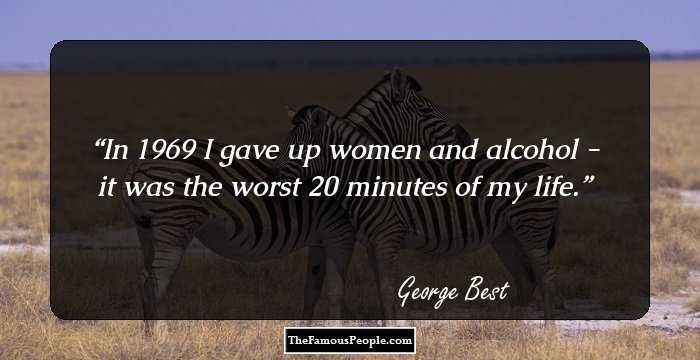 In 1973, George Best opened ‘Slack Alice’, a nightclub in Manchester. He also owned restaurants and boutiques in the city.

In 1978, he got married to Angela MacDonald-Janes, an English model, in Las Vegas. After three years, a son, Calum was born to the couple. The marriage ended in divorce eight years later.

In 1995, he got married for the second time to Alex Pursey in Chelsea, London. This marriage too ended in divorce after nine years.

George Best had alcoholism issues throughout his career due to which he missed a number of matches and practice sessions and committed acts like stealing money for alcohol from a woman’s handbag, drunk driving and appearing drunk on a talk show.

In 2000, he was found to be suffering from liver damage. Two years later, he had a successful liver transplant in London.

He died in 2005, due to lkidneyinfection and multiple organ failure, caused by side-effects of his medication. His ashes were buried in his home town of Belfast. 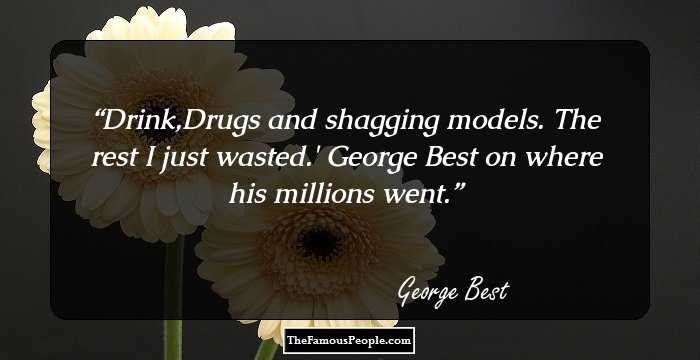 Quotes: I
Trivia:
At the age of 19, this Manchester United legend became a worldwide sensation overnight after his virtuoso performance against Benfica in the European Cup. His two-goal effort earned him the title “O Quinto Beatle” or “the fifth beetle” by the Portuguese media.

See the events in life of George Best in Chronological Order 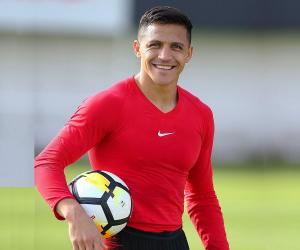