Andrey Arshavin is a Russian former footballer who played as a striker and attacking midfielder. One of the most popular footballers of all time, he started his career with Zenit Saint Petersburg in 2000. After winning several trophies for the club, including Russian Super Cup and UEFA Cup, he debuted for the Russian national team in May 2002, scoring his first goal the following year. In 2006, Arshavin was named Footballer of the Year in Russia and he eventually went on to become the most expensive player in Arsenal's history. Born in Leningrad, he began playing football at an early age and was enrolled in the Smena football academy at the age of seven. His father, who played as an amateur footballer, persuaded him to take up the sport. As a schoolboy, Arshavin was a talented draughts player as well. After playing football for years and winning numerous honors and trophies, he retired from his career in 2018. On a personal note, the former footballer is married and has three children. Besides football, he is interested in fashion and politics.
Continue Reading Below 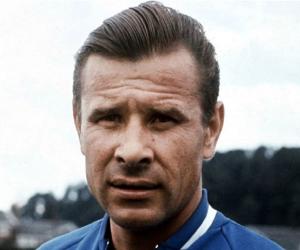 Russian People
Male Sportspersons
Russian Sportspersons
Gemini Football Players
Russian Football Players
Childhood & Early Life
Andrey Arshavin was born on 29 May 1981, in Leningrad (present day - Saint Petersburg). His father, Sergey Arshavin, was an amateur footballer. His parents separated when he was 12. His father died at the age of 40 because of heart failure.
At the age of seven, he started attending the Smena football academy. He was also a draughts player in school.
Continue Reading Below
You May Like

The Best Black Actresses Of All Time
Club Career
Andrey Arshavin started his career with the Zenit first-team squad in 2000, making his debut in a 3–0 win over Bradford City in the Intertoto Cup. During the tournament, he started as a right midfielder and then went on to play as an attacking midfielder and eventually as the second striker.
During the 2007 Russian Premier League season, he helped the club win the title, scoring 11 goals with 11 assists in all 30 matches.
He became the Man of the Match in the final during his club’s 2007–08 UEFA Cup triumph. His performances in the UEFA Cup as well as in UEFA Euro 2008 garnered the attention of numerous European clubs, and Andrey eventually joined English Premier League club Arsenal in 2009.
On 21 February 2009, he made his debut for Arsenal in a match against Sunderland which ended 0–0. On 14 March 2009, he scored his first Arsenal goal against Blackburn Rovers.
On 21 April 2009, the talented footballer gained much attention when he scored four goals against Liverpool in a tight match that ended 4–4. With this contribution, he became the first Arsenal footballer after Júlio Baptista to attain four goals in any match.
He captained the team for the first time in May 2009 in a match against Portsmouth, leading his team to win by 3–0. That month, he earned the title ‘Premier League Player of the Month’ for April.
On 1 August 2009, Arshavin scored two goals in his team’s 2–1 pre-season victory in the Emirates Cup. On 26 August, he scored his first UEFA Champions League goal in Arsenal’s 3–1 win over Celtic. On 13 December 2009, he lifted the Man of the Match trophy in a match against Liverpool.
On 20 January 2010, he helped Arsenal attain the peak position on the Premier League by scoring in the team’s 4–2 win over Bolton Wanderers. Then in September, the footballer scored against Braga in his team’s first Champions League group stage match where they won 6-0.
On 16 February 2011, Arsenal registered a victory over Barcelona for the first time in their entire history in the Champions League round of 16.
Continue Reading Below
Arshavin then moved to his youth club Zenit Saint Petersburg on a loan to play the remainder of the 2011–12 season. He made his debut for Zenit on 3 March in a 2-2 draw against CSKA Moscow.
He returned to Arsenal for the 2012–13 season and started the League Cup by scoring the third goal in a 6–1 victory over Coventry City. On 20 October 2012, he made his 100th Premier League appearance for the club in a 1–0 loss against Norwich City.
In June 2013, he again moved to Zenit, scoring in a 1–1 draw on 26 July. In July 2015, the footballer was traded to Kuban Krasnodar and played for them until February 2016.
On 18 March 2016, he signed to FC Kairat. He was named the Kazakhstan Premier League's Player of the Month for the month of July. After helping the club win the Kazakhstan Super Cup of 2017, Arshavin left them in November 2018. He confirmed his retirement shortly after.
International Career
On 17 May 2002, Andrey Arshavin debuted for the national team. His first goal with the Russian squad came against Romania on 13 February 2003.
He later played in Russia's Euro 2008 squad and helped his team reach the semi-finals.
On 25 May 2012, the footballer was included in the UEFA Euro 2012 squad. He started all three of their matches in the group stage of Group A and finished third behind on the head-to-head ruling as his team was eliminated in the group stage.
After appearing in new manager Fabio Capello's first game in charge, a match with Ivory Coast, he was omitted from the Russian squad for the 2014 World Cup qualification campaign.
Family & Personal Life
Andrey Arshavin met his former common-law wife Julia Baranovskaya in 2003. They had three kids, a daughter Yana and sons Artem and Arseniy, before separating. In 2017, he married Alisia Arshavina, and they have a daughter.

See the events in life of Andrey Arshavin in Chronological Order