Advanced Search
Genghis Khan was a legendary political leader, who is famous even today for having established the powerful Mongol dynasty. Having faced destitution at a very young age, he grew up with hunger for power and respect. Since his father died when he was very young, his mother taught him everything about Mongolian politics. The young man gradually began his conquests, and was eventually successful in uniting many of the nomadic tribes. He is known to this day for his religious tolerance and protective demeanor. Today, this famous ruler is the symbol of patriotism in Mongolia, and his name and face is used on almost every product in the country to help it sell. Though he is still revered in Mongolia, people in countries like China hold mixed sentiments about him. While his empire, which came to be known as the 'Yuan dynasty,' helped bring together most of China, his conquests also caused the death of many people. In other parts of the world like the Middle East, Genghis Khan is still abhorred for having destroyed so many lives. However, whatever sentiments people hold, he still remains one of the most important figures in the history of Mongolia, and the world. Möngke Khan
DID WE MISS SOMEONE?
CLICK HERE AND TELL US
WE'LL MAKE SURE
THEY'RE HERE A.S.A.P
Quick Facts

Mongolian People
Mongolian Emperors & Kings
Mongolian Historical Personalities
Childhood & Early Life
Genghis Khan was born Temujin in Delüün Boldog, present day Mongolia, to Yesügei, leader of the ‘Khamag Mongol’ tribe, and his wife Hoelun. Though the exact date of his birth is unknown, it is estimated that he was born around 1162.
Temujin lived with his parents and his siblings. While Hasar, Temüge, Temülen, and Hachiun were his own siblings, Begter and Belgutei were his half-brothers.
When Yesügei was betrayed and killed by representatives of the 'Tatar' tribe, Temujin wanted to become the chief. However, he was rejected because he was very young, and the whole family was left to fend for themselves. For a long time the family lived in dire poverty, foraging for food.
At the time, Mongolian tribes were not united, and the only way of forming allies was by fixing marriages between children of individual rulers. 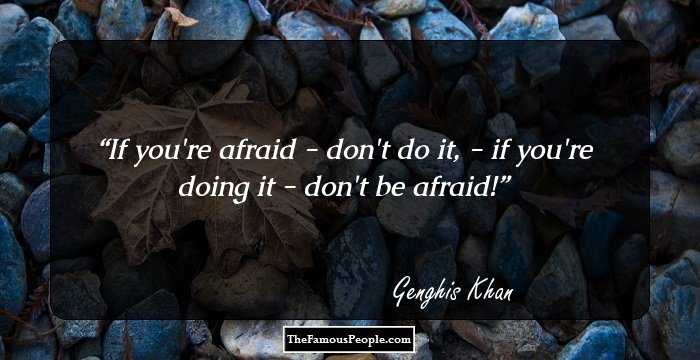 Continue Reading Below
Accession & Reign
Temüjin initially became a close associate of his father’s brother, Toghrul, ruler of the 'Khereid' tribe. Soon, Temüjin began rising to power, and his greatest opposition came from his childhood friend and political leader of the 'Jadaran' tribe, Jamukha.
In 1186, Temüjin became the 'Khan' of the Mongols, causing his friend-turned-rival Jamukha to launch an attack with thirty thousand soldiers. In the 'Battle of Dalan Balzhut,' which was led by Jamukha, Temüjin was defeated. However, he gained many followers, owing to the cruel treatment meted out by Jamukha.
Around 1190, Temujin created a code of law called 'Yassa' to rule his subjects. The 'Yassa' was never made public, so that it could be changed as and when required.
When the Jin dynasty attacked its earlier ally, the ‘Tatars,’ in 1197, Temujin and his ally Toghrul offered military help. The Jin dynasty won, and its accomplices were honored with the titles 'j'aut quri' and 'Ong Khan.'
Temujin continued to conquer enemy tribes. He took care of the defeated soldiers, unlike other Mongol leaders, who would abandon the wounded. He also went to the extent of making his mother adopt the orphans of his nemesis.
Soon, Toghrul's son Senggum conspired against Temujin as he was jealous of Temujin's popularity and power. Toghrul supported his son, but Temujin defeated Senggum when he came to know about their plan.
When Toghrul denied Temujin's son Jochi the opportunity to become a prospective groom for his daughter, he gave Temujin another reason to drift away from him. Subsequently, Toghrul joined forces with Jamukha and declared war against Temujin. Temujin defeated Toghrul in the war. Consequently, Jamukha fled, leading to the extinction of the ‘Khereid’ tribe.
In 1201, when Jamukha sought refuge with the ‘Naiman’ tribe, the rulers of the 'Kara-Khitan Khanate' empire were declared the universal ruler of Mongols. Jamukha was bestowed with the title 'Gür Khan.'
In 1204, Temujin defeated Kuchlug, the ruler of ‘Naiman’ tribe, who later took over the 'Kara-Khitan Khanate.'
Continue Reading Below
After numerous wars between Jamukha and Temujin, the former was betrayed by his followers in 1206. Jamukha was forced to surrender to Temujin, who executed him by breaking his back, as per Jamukha’s last wish.
This victory consolidated Temujin’s position as a Mongol ruler, and he was named ‘Genghis Khan’ by a council of Mongol chiefs, known as ‘Kurultai.’
As a ruler, he was eager to learn new tactics, and carefully studied the thought process of his rivals before attacking them. Thus by 1206, he had brought under his control; the tribes of ‘Khereids,’ ‘Naimans,’ ‘Mongols,’ and the ‘Tatars.’
From 1207 to 1210, Genghis fought several battles against the 'Western Xia' empire, before the ruler of the 'Western Xia' empire surrendered to the Mongol leader, and became a vassal. Even the ‘Uyghur’ tribe was captured and their officials were appointed as administrators in the Mongol dynasty.
Soon, the Mongol ruler launched an attack against 'Jin Dynasty' at the Badger Pass in Northern China. The Jin Emperor Xuanzong fled from his capital Zhongdu (present day Beijing), and took shelter in a city called Kaifeng. Zhongdu was seized, and made a part of the Mongol empire by Genghis in 1215.
After capturing Zhongdu, the Mongol leader continued his conquests, and zeroed in on the 'Kara-Khitan Khanate.’ Kuchlug, former ruler of the 'Naiman' tribe, who now had power over the 'Kara-Khitan,' was defeated and killed by Genghis Khan's small troop of 20,000 soldiers, led by general Jebe.
From 1219 to 1222, Genghis fought several battles and finally took control of the 'Khwarezmid Empire,' which was ruled by Shah Ala ad-Din Muhammad. Even though the Mongol ruler initially wanted to establish trade connections with the ‘Khwarezmid Empire,’ Inalchuq, the governor of the city of Otrar, marred the former's plans.
A second attempt was made by sending a Muslim and two Mongol ambassadors to meet Emperor Shah Ala ad-Din Muhammad, but this too was countered. Muhammad captured the ambassadors, shaved the heads of the Mongols, killed the Muslim, and sent his head back to Genghis.
The Mongol emperor was enraged, and attacked the 'Khwarezmid Empire' in order to take revenge. By 1222, along with his son Jochi, and his trusted generals, Jebe and Tolui, Genghis had defeated Muhammad, and destroyed all signs of the empire's existence.
Continue Reading Below
On his return, Khan’s commanders Jebe and Subutai conquered major parts of the ‘Bulgars dynasty.’ They defeated their enemies encircling the Caspian Sea and took control over modern-day Afghanistan, Hungary, and most of Europe. This became an unparalleled conquest in the history of the Mongolian empire.
By then, the already conquered dynasties of 'Western Xia,' and 'Jin' had coalesced to conspire against Genghis by condemning the latter's attack on 'Khwarezmid Empire.'
In 1226, the Mongol emperor returned, and launched a counter-attack. Within a year, Genghis destroyed Ning Hia, the capital of Xia, and took over the whole empire. He ordered each and every member of the Xia ruling family to be killed, thus bringing about the extinction of the dynasty. 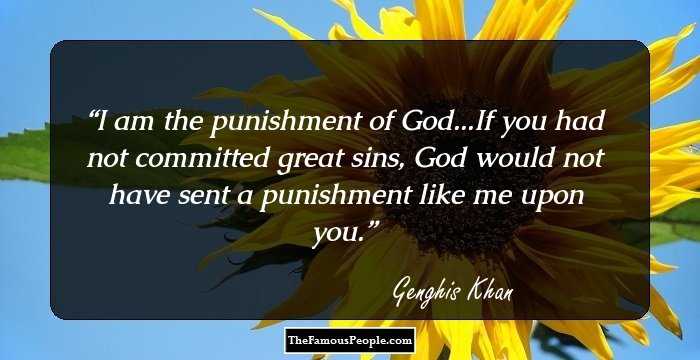 Quotes: You, Me, God, Like, I
Major Works
The famous Mongol emperor is best known for his creation of a decree called the ‘Yassa.’ These rules of conduct were implemented in secret, so that they could be changed as and when required. Initially, the ‘Yassa’ was followed only during wars, but it was later modified to include the empire's lifestyle and cultural activities.
Personal Life & Legacy
Though Temujin's marriage to Börte, a member of the 'Khongirad' tribe, was fixed by his father when Temujin was just nine years old, he married his bride when he turned 16.
Börte was soon taken captive by the people of 'Merkit' tribe, and Temujin approached his then friend Jamukha and his father's ally Toghrul to help rescue his wife.
Within a few months of rescuing her, she became a mother to their eldest son, Jochi. Though there were rumors that Jochi was an illegitimate child, the boy was accepted by Temujin as his own son.
Though the Mongol leader had children from other wives, Börte was the only empress to the throne. The couple had three other sons, Ögedei, Chagatai, and Tolui, who later became successors to the Mongol empire.
This legendary ruler followed 'Tengrism,' a religion unique to Central Asia, but was tolerant of all other beliefs. In fact, he was even eager to learn and practice their teachings.
In 1227, after the conquest of the 'Western Xia' empire, Genghis Khan died. The cause of his death is unknown, though there have been several speculations and stories woven around the incident. It is presumed that his body was buried near the Burkhan Khaldun Mountain and the Onon River, in the Mongolian province of Khentii.
Several years later, a memorial was constructed in his honor in Xining Town. Since then, the mausoleum has been moved to various locations to prevent it from destruction during wars.
Mongolia’s airport, located in the city of Ulaanbaatar, has been named ‘Chinggis Khaan International Airport’ as a tribute to the famous leader.
Several Indian, Egyptian, Mongolian, and Russian movies have been made to chronicle the famous ruler's life, most of them being named after him. Apart from that, many TV series about his life and military achievements have been aired in Hong Kong.
English poet F. L. Lucas has written a poem titled 'The End of Genghis' where the dying leader retrospect’s his life. Genghis Khan has been the subject matter of many novels, such as Vasili Yan's 'Jenghiz Khan and Batu Khan,' Telugu writer Thenneti Suri's ‘Jenghiz Khan,’ and British writer Conn Iggulden's 'The Conqueror.'
There are also many video games based on the ruler's conquests, the most famous being, 'Age of Empires II: The Age of Kings.' 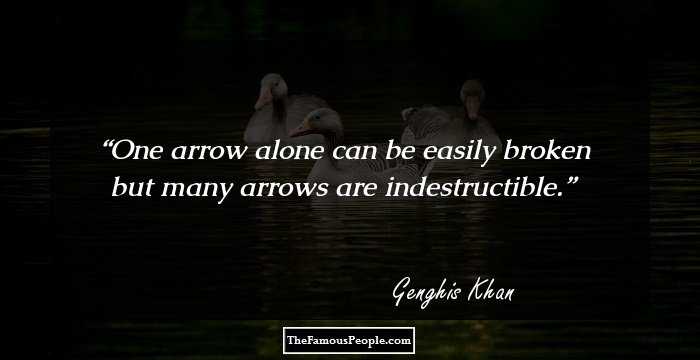 Quotes By Genghis Khan | Quote Of The Day | Top 100 Quotes

See the events in life of Genghis Khan in Chronological Order