Gegard Mousasi is a Dutch mixed martial artist who remained a four-time World Champion in the sport. These included winning the DREAM Middleweight Championship, DREAM Light Heavyweight Championship, Strikeforce Light Heavyweight Championship and Cage Warriors World Middleweight Championship. Developing an early interest in martial arts, this ace fighter started training in judo first and later earned a Black belt in the combat sport. With time he transitioned into boxing, kickboxing and finally Mixed Martial Arts (MMA). His early accomplishment is manifested from his Amateur Boxing record that chronicles 12 wins out of 13. He earned the Netherlands Amateur Boxing National Championship in 2001. His stint as a kickboxer also records an enviable win in all the eight matches he played. MMA record of this young and energetic fighter is also quite impressive with 42 wins so far out of 50. Presently competing in American MMA promotion company Bellator MMA he had a stint with world’s largest MMA promotion, Ultimate Fighting Championship (UFC), an American MMA organisation, and at the time of leaving the promotion in mid-2017, he was ranked #4 in its official middleweight rankings. Sherdog, an American website dedicated to MMA rank him as world’s #3 middleweight. 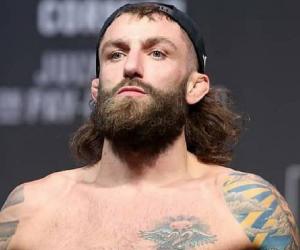 Dutch People
Dutch Men
Tall Celebrities
Tall Male Celebrities
Dutch Kickboxers
Childhood & Early Life
He was born on August 1, 1985, in Tehran, Iran, during the Iran–Iraq War, to a Christian Armenian family. His family name originally was Mofsesian which was changed to Mousasi long before he was born.
He moved to Leiden, Netherlands with family at age four and completed his grade school studies there.
He got drawn towards martial arts in his childhood which led him to take training in judo at just eight years of age.
At the age of 15 he started training in boxing. In 2001 at age 16 he won the Netherlands Amateur Boxing National Championship. Overall amateur boxing record of Mousasi shows his remarkable performance in the combat sport with 12 wins out of 13, of which 9 were won via knockout.
Following his stint in boxing, he turned to kickboxing. He later transitioned into MMA following footsteps of his elder brother Gewik who is presently thriving as an MMA trainer in Holland. Gewik also looks after finances and payments related to Gegard’s career.
Continue Reading Below
You May Like

The Best Black Actresses Of All Time
Career
His early MMA bouts as a pro from 2003 saw him contending in different events across the globe. These included winning against Daniel Spek at the 2H2H: 1st Open Team event on April 27, 2003 in Amsterdam, Netherlands; against Niko Puhakka at Fight Festival 11 on September 11, 2004 in Helsinki, Finland; and against Tsuyoshi Kurihara at Deep: 22 Impact on December 2, 2005 in Tokyo, Japan among others.
In pursuit of participating in PRIDE 2006 Welterweight Grand Prix, he signed with Pride Fighting Championships that year. He contended and defeated Makoto Takimoto in the opening round at Pride Bushido 11 on June 4, 2006 in Saitama, Japan. In the quarterfinal held on August 26, 2006, in Nagoya, Japan, he lost to Akihiro Gono in the second round via Submission (armbar).
His next fight was against Hector Lombard at the Pride - Bushido 13 on November 5, 2006 in Yokohama, Japan, which he won via unanimous decision in the second round.
He emerged winner of the Cage Warriors Middleweight Championship title on December 9, 2006, fighting against Gregory Bouchelaghem at the CWFC: Enter The Rough House event held in Nottingham, England.
He continued his winning spree fighting in different events prior to his stint in the DREAM 2008 Middleweight Grand Prix. The opening round of the Dream's Middleweight Grand Prix hosted in the Dream 2 event saw him beat Denis Kang on April 29, 2008 in Saitama, Japan.
This was followed by a quarterfinal win against Dong Sik Yoon in Dream 4 event on June 15, 2008, in Yokohama, Japan; and a semi-final win against Melvin Manhoef in Dream 6 on September 23, 2008, in Saitama, Japan.
In the Dream 6: Middleweight Grand Prix 2008 Final Round held on September 23, 2008, he defeated Ronaldo Souza via knockout (upkick) in the very first round to clinch the inaugural DREAM Middleweight Championship title.
On May 26, 2009, during Dream 9 he won the DREAM Super Hulk Grand Prix Quarterfinal Openweight bout defeating Mark Hunt . His injury however led him to withdraw from the bout at Dream 11 against Rameau Thierry Sokoudjou.
His next feat was winning the Strikeforce Light Heavyweight Championship title on August 15, 2009, at Strikeforce: Carano vs. Cyborg beating Renato Sobral. He however lost the title to Muhammed Lawal the following year during Strikeforce: Nashville on April 17.
Continue Reading Below
Meanwhile on November 7, 2009, he defeated Rameau Thierry Sokoudjou at Strikeforce: Fedor vs. Rogers event and beat journeyman Gary Goodridge at Dynamite!! 2009 on December 31, 2009.
Eying on the Dream Light Heavyweight Championship, Mousasi beat Jake O'Brien in the semi-final bout held at Dream 15 on July 10, 2010 to face Tatsuya Mizuno in the final. The finale that took place at Dream 16 on September 25, 2010 saw him defeating Mizuno via submission (rear-naked choke) in the first round to emerge as the new champion.
He thrived in defending the Dream Light Heavyweight Championship title against Hiroshi Izumi at Dream: Japan GP Final on July 16, 2011.
His Ultimate Fighting Championship debut happened on April 6, 2013 at UFC on Fuel TV: Mousasi vs. Latifi where he fought with an injured knee against Ilir Latifi and beat the latter via unanimous decision. Following the bout he went through a knee surgery.
His return to Middleweight during UFC Fight Night: Machida vs. Mousasi on February 15, 2014 saw him losing to Lyoto Machida by unanimous decision. Nonetheless the bout fetched him his first ‘Fight of the Night’ bonus award.
The main event at UFC Fight Night 41 saw him fighting and winning against Mark Muñoz on May 31, 2014 as also garnering his first ‘Performance of the Night’ bonus award. He ended the year losing to Ronaldo Souza at UFC Fight Night: Jacare vs. Mousasi on September 5, 2014.
His second ‘Performance of the Night’ bonus award came when he defeated Dan Henderson at UFC on Fox: Gustafsson vs. Johnson on January 24, 2015. Moving forward in the year he won against Costas Philippou at UFC Fight Night: Edgar vs. Faber on May 16 and lost to Uriah Hall at UFC Fight Night: Barnett vs. Nelson on September 27.
He started 2016 with a win against Thales Leites at UFC Fight Night: Silva vs. Bisping on February 27. He went on to add four more UFC wins before leaving the promotion in July 2017. Among these the bout against Thiago Santos at UFC 200 on July 9, 2016 saw him bagging his third ‘Performance of the Night’ bonus award.
He then signed a six-fight deal with Bellator MMA which he announced on July 10, 2017. He declared that he will be eyeing for the light heavyweight belt after acquiring the Bellator middleweight championship title.
Bellator MMA declared during the Bellator 181 main card that the promotional debut of Mousasi will happen at Bellator 185 on October 20, 2017 with Alexander Shlemenko as his opponent.

See the events in life of Gegard Mousasi in Chronological Order 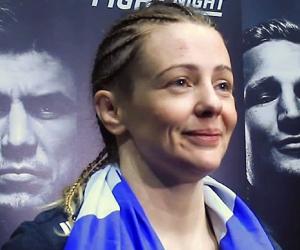