(One of the Best Mixed Martial Artists of All Time)

Anderson Silva is a Brazilian mixed martial artist who is considered the greatest mixed martial artist of all time by a number of MMA publications, as well as the UFC president Dana White. He is a former UFC Middleweight Champion who holds many UFC records, including the longest title streak with 16 straight wins and the most title defenses at 10. Coming from a poor family, he initially did not have the money to take fighting lessons, and supported himself in his early years working as a file clerk or at McDonald’s. He eventually joined Chute Boxe Academy and later earned his black belt in Brazilian jiu-jitsu from Antônio Rodrigo Nogueira. He is also a professional boxer and has won one of his two professional fights via knockout. He has appeared in several films and in the Netflix reality show ‘Ultimate Beastmaster’. The documentary, ‘Like Water’, was based on his life. He is a fan of comic books and the superhero Spider-Man, from whom he got his nickname ‘The Spider’. José Aldo
14th April In History
DID WE MISS SOMEONE?
CLICK HERE AND TELL US
WE'LL MAKE SURE
THEY'RE HERE A.S.A.P
Quick Facts

As his family could not afford his jiu-jitsu lessons, he started by watching neighborhood kids fight, and later practicing with them. By the time he was twelve, his family was able to pay for his taekwondo lessons. He briefly learned Capoeira and then moved on to Muay Thai at the age of sixteen.

He was part of the famed Chute Box Academy, but later parted ways following a bitter argument over payments. The academy reportedly ordered Pride not to give him more fights, but later Antônio Rodrigo Nogueira took him under his wings and helped him develop his potential. 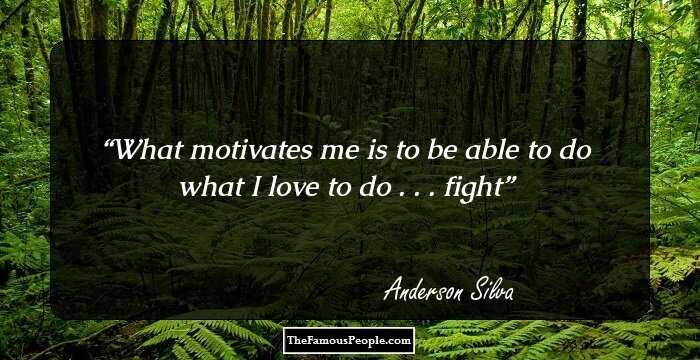 In 1997, Anderson Silva started his professional fighting career in Brazil in the welterweight category with two back-to-back wins, followed by his first loss to Luiz Azeredo in 2000. However, he soon rebounded with a nine-fight winning streak, including one against the then-undefeated Shooto champion Hayato Sakurai on August 26, 2001, in Japan, which made him the new Shooto Middleweight Champion.

He started his Pride Fighting Championships run with three wins during 2002-03, but then lost to underdog Daiju Takase at Pride 26, following which he even considered quitting MMA. Antônio Rodrigo Nogueira convinced him to continue fighting and to join his Brazilian Top Team.

On September 11, 2004, he earned a decision win against renowned striker Lee Murray at Cage Rage 8 in London, thereby winning the Cage Rage Middleweight Championship. After his loss to Ryo Chonan on December 31, 2004, by submission, he was cut by Pride FC and returned to Cage to defend his title against Jorge Rivera and Curtis Stout.

He then participated in Hawaii's Rumble on the Rock promotion against Yushin Okami, but was disqualified despite being the favorite after he, unaware of the rules, kicked him in the face when he was down. While Okami was reportedly in a position to fight, he chose the disqualification win, which Silva called cheap and cowardly.
In April 2006, at Cage Rage 16, after his highly anticipated match up with Matt Lindland was cancelled, he fought Tony Fryklund instead and defended his title. Later that month, he signed a multi-fight contract with the UFC and debuted at Ultimate Fight Night 5 on June 28, 2006, winning against Chris Leben via KO.
UFC decided to let the viewers choose his next opponent via a poll, following which he faced the UFC Middleweight Champion Rich Franklin at UFC 64 on October 14, 2006. He won the fight by TKO at 2:59 minutes into the first round, becoming the second man to defeat Franklin, as well as the new UFC Middleweight Champion.

During 2007, he won a non-title bout with Travis Lutter and successfully defended his title against Nate Marquardt and Rich Franklin, earning 'Knockout of the Night' honors in both the latter fights. He next fought Pride Middleweight champion Dan Henderson in a title unification bout at UFC 82 on March 1, 2008, and won the fight via rear-naked-choke in the 2nd round.

He debuted in the Light Heavyweight division against James Irvin at UFC Fight Night: Silva vs. Irvin on July 19, 2008, winning the fight via KO at 1:01 of the first round. On October 25, 2008, his next fight to defend his Middleweight title against Patrick Côté ended abruptly after Côté injured himself in the third round of the fight, handing him a TKO win.
At UFC 97 in April 2009, Anderson Silva made the UFC record for nine consecutive wins against Thales Leites, while his opponent was credited for taking him through 5 rounds to a judges' decision. He again fought in a Light Heavyweight bout against former Champion Forrest Griffin at UFC 101 on August 8, 2009, winning via KO.
Continue Reading Below

Despite winning via unanimous decision, he was widely criticized for not engaging Demian Maia at UFC 112 on April 10, 2010, which prompted UFC president Dana White to leave mid-fight for the first time. His last-moment win against Chael Sonnen for the UFC Middleweight Title at UFC 117 made news as Silva took more hits during the fight than he took in his entire UFC career till then.

He next defended his middleweight title against Vitor Belfort, Yushin Okami and Chael Sonnen, and stopped Stephan Bonnar via strikes in the 1st round of their light heavyweight bout in October 2012. However, his 17-fight winning streak, as well as the longest UFC title reign ended after he lost to Chris Weidman on July 6, 2013, at UFC 162 via KO in the second round.

He lost the rematch with Weidman as well, and was replaced as one of the coaches for 'The Ultimate Fighter: Brazil 4' due to failed drug tests. His victory against Nick Diaz on January 31, 2015 was declared as no contest after he was tested positive for steroids, following which he was suspended for one year.

After returning from his PED suspension, he lost his Middleweight bout against Michael Bisping and his Light Heavyweight bout against Daniel Cormier. However, he bounced back with a victory over Derek Brunson on February 11, 2017, and is scheduled to face Kelvin Gastelum on November 25, 2017 at UFC Fight Night 122. 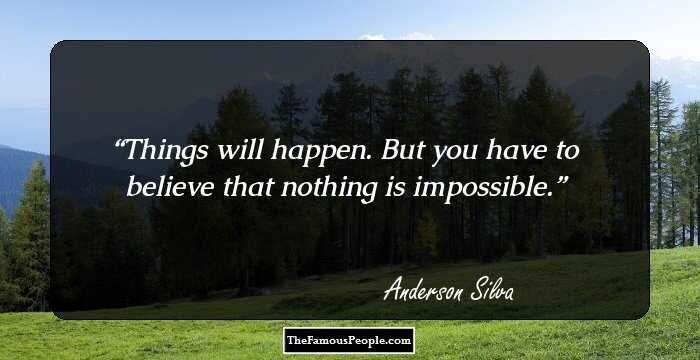 Quotes: Believe
Achievements
Anderson Silva is a former Shooto Middleweight Champion and UFC Middleweight Champion. He has a number of UFC records under his belt, including most consecutive title defenses, most successful title defenses, most consecutive wins in the UFC and longest win streak in UFC history.
Personal Life & Legacy

Anderson Silva married his longtime girlfriend, former gymnast Dayane, in the Summer of 2011, after being together for 20 years. They have two daughters and three sons together. His wife appeared in the 2009, feature film ‘Never Surrender’. 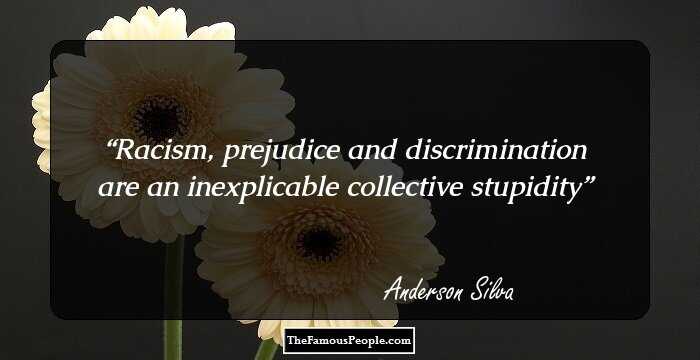 Trivia
Anderson Silva practiced ballet when he was a child, for which he was bullied by children in his school. He also allowed his sister to dress him up in her clothes, which made some think he was gay.

Quotes By Anderson Silva | Quote Of The Day | Top 100 Quotes

See the events in life of Anderson Silva in Chronological Order