Advanced Search
Gabriel Macht is an American actor, best known for playing the title role in the 2008 neo-noir superhero film ‘The Spirit.’ He is also popular for playing Harvey Reginald Specter in the courtroom drama television series ‘Suits.’ He started his career at the age of eight when he played Jorge in the 1980 comedy-drama film ‘Why Would I Lie?’ His performance in the film earned him a nomination at the ‘Young Artist Award.’ Apart from being known as a TV and film actor, Macht has also made a name for himself as a theatre actor. He has also produced a couple of projects and has directed a few episodes of ‘Suits.’ Gabriel Macht is popular on social media platforms, such as Instagram where he has millions of followers. American People
T V & Movie Producers
American Men
New Yorkers Actors
Beverly Hills High School
Childhood & Early Life
Gabriel Macht was born on January 22, 1972, in The Bronx, New York City, New York, USA, to Stephen Robert Macht and Suzanne Victoria Pulier. His father is an actor, best known for appearing in films like ‘Final Voyage’ and ‘Galgameth.’ Gabriel Macht lived in New York City until the age of five and then moved to California where he attended ‘Beverly Hills High School.’
Being the son of a popular actor, Macht developed an interest in acting at a young age. He made his film debut at the age of eight when he played Jorge in ‘Why Would I Lie?’ His performance in his debut film earned him a nomination at the ‘Young Artist Award’ for ‘Best Young Motion Picture Actor.’
After graduating from high school in 1990, he went to ‘Carnegie Mellon College of Fine Arts’ where he was part of the ‘Delta Upsilon’ fraternity. He graduated from ‘Carnegie Mellon College of Fine Arts’ in 1994. He then started appearing in stage plays including ‘To Whom It May Concern’ at the 1997 ‘Belgrade International Theatre Festival.’
Continue Reading Below
Career
He made his television debut in 1991 when he played Tal Weaver in one of the episodes of teen drama television series ‘Beverly Hills, 90210.’ In 1995, he played Johnny Draper in a television film titled ‘Follow the River.’ In 1997, he played a minor role in the popular television sitcom ‘Spin City.’
He returned to playing film roles in 1998 when he was cast to portray Steve Casillo in the romantic comedy-drama film ‘The Object of My Affection.’ In the same year, he was also cast to play Troy in the Tod Williams-directed comedy-drama film ‘The Adventures of Sebastian Cole.’ He continued playing minor roles in TV series, such as ‘Sex and the City’ and ‘Wasteland’ throughout the late-1990s.
In 2000, he played William Holden in a television film titled ‘The Audrey Hepburn Story’ and then played prominent roles in a couple of movies, such as ‘The Bookie's Lament’ and ‘101 Ways (The Things a Girl Will Do to Keep Her Volvo).’ He also landed the main role of Dr. Mark Gabriel in ‘NBC’ network’s television series ‘The Others.’
Macht was cast to play Frank James in the Les Mayfield-directed 2001 Western film ‘American Outlaws.’ In the same year, he was also seen playing Lt. Jeremy Stackhouse in the American war film ‘Behind Enemy Lines.’ The following year, he portrayed Officer Seale in the Joel Schumacher-directed American-Czech action comedy film ‘Bad Company.’
In 2003, he first played Zack in the spy thriller film ‘The Recruit’ and then played Gram Parsons in the comedy-drama film ‘Grand Theft Parsons.’ After playing Lawson Pines in the drama film ‘A Love Song for Bobby Long’ in 2004, he appeared in one of the episodes of ‘CBS’ network’s crime-drama television series ‘Numbers’ in 2005. In 2005, he also played R.J. O'Brian in a mini-series titled ‘Archangel.’ The mini-series was adapted from Robert Harris’ novel of the same name.
Macht played John Russell Jr. in the Robert De Niro-directed 2006 spy film ‘The Good Shepherd.’ The cast of the film was honored at the 2007 ‘Berlin International Film Festival’ for ‘outstanding artistic contribution.’ The film was also nominated for ‘Best Art Direction’ at the 79th ‘Academy Awards.’
In 2008, he was cast to play the title role in the Frank Miller-directed American neo-noir superhero film ‘The Spirit.’ In the film, Macht was seen alongside popular actors like Samuel L. Jackson, Sarah Paulson, and Scarlett Johansson. The following year, he played important roles in three films, namely ‘Middle Men,’ ‘Whiteout,’ and ‘One Way to Valhalla.’
After playing Trey Hannigan in the romantic comedy film ‘Love & Other Drugs,’ Macht landed the lead role of Harvey Reginald Specter in the long-running courtroom drama television series ‘Suits.’ He has also produced and co-produced several episodes of the series.
In 2011, he played Paul Cutler in the direct-to-video action crime film ‘S.W.A.T.: Firefight’ and then played Wyatt in the comedy-drama film ‘A Bag of Hammers.’ In 2013, he played Detective Williams in a horror-thriller film titled ‘Breaking at the Edge.’
Apart from playing television and film roles, Gabriel Macht continues his association with the ‘Mad Dog Theater Company’ where he appears in stage plays. He has also made guest appearances in popular TV shows, such as ‘Entertainment Tonight,’ ‘Big Morning Buzz Live,’ ‘The Queen Latifah Show,’ ‘Today,’ ‘Up Close with Carrie Keagan,’ and ‘Jimmy Kimmel Live!’
Family & Personal Life
Gabriel Macht’s father is a popular actor, while his mother is a museum curator and archivist. He has three siblings, namely Jesse, Ari Serbin, and Julie. His family is of Ashkenazi Jewish descent.
Macht dated Australian-born actress Jacinda Barrett and married her in 2004. On August 27, 2007, Macht and Barrett were blessed with a daughter named Satine Anais Geraldine. On February 26, 2014, Jacinda Barrett gave birth to their second child, a son named Luca. On May 19, 2018, Barrett and Macht attended the royal wedding of Prince Harry and Meghan Markle at ‘Windsor Castle’ in England.
Macht is active on social media platforms, such as Twitter and Instagram. He primarily posts pictures of his family members on Instagram where he has millions of followers.

See the events in life of Gabriel Macht in Chronological Order 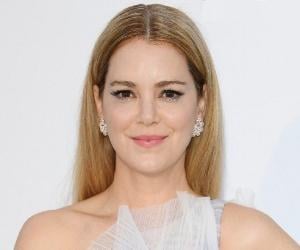