(Rapper Best Known for His Album 'These Things Happen')

Gerald Earl Gillum, popularly known by his stage name G-Eazy, is an American rapper and record producer who got his big break with the mixtape The Endless Summer, which he self-released on the internet for free. He got recognition for the song Runaround Sue which featured American Idol contestant Devon Baldwin in the music video. G-Eazy, who doesn't consider himself a "natural" rapper who would nail it in the first try, had the passion and the entrepreneurial drive to make it big in the music industry. Even before releasing his first full-fledged album, he spent almost a decade in polishing his art and building a fan base. He has always dreamed big and aspired to reach heights that icons like Elvis Presley or Tupac achieved. Learning from his experience on the huge number of tours he has been a part of, he built up his brand from the ground up, emerging as a hip-hop heartthrob inspired by the style of the early 1950s and 1960s. His image, with black leather jackets and James Dean haircut, is reminiscent of the American Gangster era. American People
Hip Hop Singers
Record Producers
American Men
California Musicians
Childhood & Early Life
G-Eazy was born on May 24, 1989, in Oakland, California, United States, to Edward Gillum and Suzanne Olmsted. His father is an associate professor of art at CSU Fresno. His parents separated when he was in the first grade, following which he started living with his grandparents in Berkeley, California.

His mother, was an artist, who worked as a part-time teacher at two different schools to raise G-Eazy and his brother, James. The family later moved to North Oakland, but he continued to attend school in Berkeley.

It was his mother who first introduced him to a life of music and fame, showing him the Beatles film 'A Hard Days Night' during his early years. G-Eazy, who had already decided to have a career in music, did odd jobs at the age of 14 to earn money to pursue his dreams.

His mother started dating a woman named Melissa Mills when he was about 12 years old. While he became confused and embarrassed at first, he later accepted Mills as a family member; however, Mills suffered from depression and died of drug overdose when he was still very young. His mother, Suzanne Olmsted, passed away in November 2021. 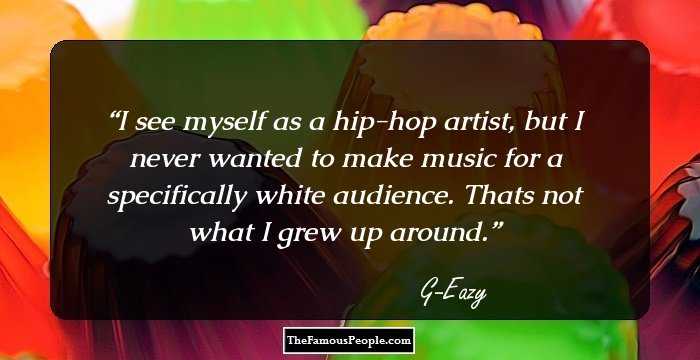 G-Eazy started rapping while he was still in middle school in Oakley, California. At the age of 15, he and his friends put together a band named The Bay Boyz and began releasing their songs through their MySpace page.

He soon began producing his own mixtapes and sold them for five bucks each. He would often try to make the CDs look official with his self-made cover art and logo. He moved to New Orleans after graduating from school and enrolled in Loyola University's Music Industry Studies program.

In 2008, the song Candy Girl became widely popular, and was included in The Epidemic LP in 2009. As he started to attract fans, following the example of a band from his high school, he decided to begin touring to build up a fan base.

His manager roped in Christoph Andersson, a DJ and a fellow student at the Loyola University, to open for his shows during his tours. This created a longtime partnership between the two, with Andersson touring with him for two years straight and later producing and co-writing songs for his albums.
By this time, G-Eazy had become the new hip-hop sensation in the East Bay Area, joining the ranks of Lil B, Crohn and The Cataracs. In 2010, his popularity exploded as he started to open for established artists like Lil Wayne and Snoop Dogg. 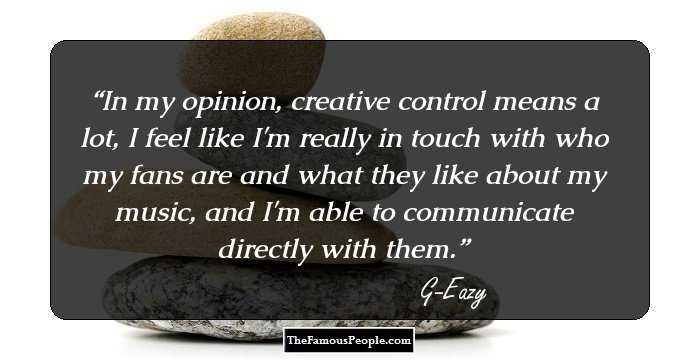 G-Eazy gained a foothold in the music industry with the release of the mixtape The Endless Summer in August 2011. The song Runaround Sue, which was sampled from the original 1961 No.1 song by Dion DiMucci, became a runaway hit and earned millions of views on YouTube.

In 2011, while still at the University, he toured with Drake for some time, but had to cancel it as the professors threatened to fail him if he missed more classes. In November that year, following his graduation, he went on a nationwide tour with Shwayze.

He continued to tour around America in 2012, performing on the annual Vans Warped Tour in June and on the Excellent Adventure Tour in July, appearing alongside Hoodie Allen. In September that year, he made it to the 3rd place on the iTunes Hip-Hop Chart with his self-released first full-length album, Must Be Nice.

On July 9, 2013, he joined Lil Wayne and T.I., performing on America’s Most Wanted Tour. During this tour, he performed songs from his next album, These Things Happen, which was his first album to be released by RCA Records the next year.

Following the success of his latest album, he embarked on his first overseas tour, From the Bay to the Universe. He appeared on national television for the first time in 2014 on Late Night With Seth Meyers, where he performed the song I Mean It live.

On December 4, 2015, he released his third studio album, When It's Dark Out, led by the single Me, Myself & I featuring Bebe Rexha, which peaked at No.7 on the US Billboard Hot 100. He went on to collaborate with pop singer Britney Spears for the single Make Me..., which released on July 15, 2016.

Along with singer Kehlani, he recorded the song Good Life for the soundtrack of the 2017 movie The Fate of the Furious.

In December 2017, he released his fourth studio album, The Beautiful & Damned, featuring the singles No Limit, Him & I and Sober. The album debuted at #3 on the US Billboard 200, becoming the singer’s third US top 10 album.

Major Works
G-Eazy's album, 'These Things Happen,' his first album to be released by a major record label, debuted at No.3 on the US 'Billboard 200', and secured the top spot on 'Top R&B/Hip-Hop Albums' chart. The album sold 250,000 copies in the United States in about a year and received Gold certification from RIAA.

His third studio album, When It's Dark Out, was received with positive reviews and made it to No.5 on the Billboard 200, as well as ranked No.1 on the Top R&B/Hip-Hop Albums chart. The album, which featured his hit single Me, Myself & I, has earned a Platinum certification from RIAA. 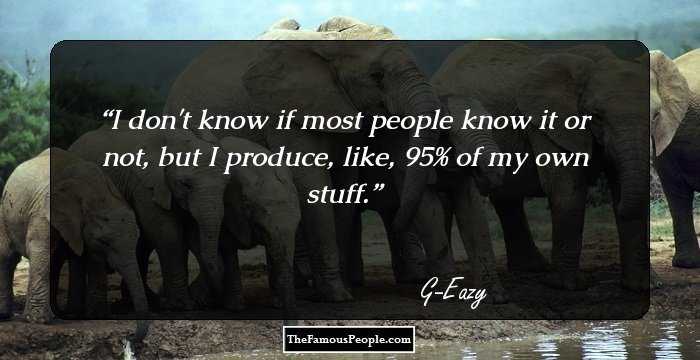 Quotes: Like, I
Awards & Achievements
In 2016, G-Eazy was nominated for the 'Best Hip-Hop Artist' in the 'MTV Europe Music Awards'. The next year, he won a 'People's Choice Award' in the category 'Favorite Hip-Hop Artist'.
Love Life

G-Eazy was once in a relationship with singer, actress, and model Devon Baldwin. They first met while studying at the Loyola University at New Orleans. He also dated Lana Del Rey at one point.

He was in a relationship with singer Halsey for several months before breaking up. In late 2018, it was reported that he was dating a woman named Christina Roseann Ray. However, that romance proved to be a short-lived one.

In early 2019, he was romantically linked to Yasmin Wijnaldum, a Victoria's Secret model. In 2020, he also dated actress  Ashley Benson.

See the events in life of G-Eazy in Chronological Order