Frank Richard Oznowicz, popularly known as Frank Oz, is an American puppeteer, director, actor and voice-artist. Oz is better known as the creator and performer of the Muppet characters such as ‘Miss Piggy’ and ‘Fozzie Bear’ along with Jim Henson in ‘The Muppet Show’. He also created the puppet characters that are loved by children and adults alike—‘Cookie Monster’, ‘Bert’, and ‘Grover’ for the popular children’s television show ‘Sesame Street’. Oz was born in England into a family of amateur puppeteers, which naturally gave way to Oz’s interest in puppets and the art of puppeteering. By the time he was a teenager, he found Jim Henson who took him along for ‘Muppets, Inc.’ and later when he created his own show ‘The Muppet Show’, several other small projects and movies like ‘The Dark Crystal’, etc., he always collaborated with Oz and made him his primary creative consultant. Oz has himself directed many movies over the years, like, ‘Dirty Rotten Scoundrels’, ‘What About Bob?’, ‘Death at a Funeral’, etc. Oz is also known for giving the world its beloved Star Wars puppet character, ‘Yoda’ with its trademark reverse grammar style. American People
Directors
Voice Actors
American Men
Tall Celebrities
Childhood & Early Years
Oz was born in Hereford, England, to Frances and Isidore Oznowicz. Both his parents were puppeteers. His Dutch-Polish father and Flemish mother struggled with Nazi invasion and moved to England and later, immigrated to California when Oz was 5.
He attended the Oakland Technical High School and later went to Oakland City College. He was attracted towards puppets since an early age and by the time he was 18 he had learnt a lot about puppets - courtesy parents.
He met with Jim Henson at a puppeteering conference and Henson liked his work with puppets and a few years later, he asked him to join his Muppets team. 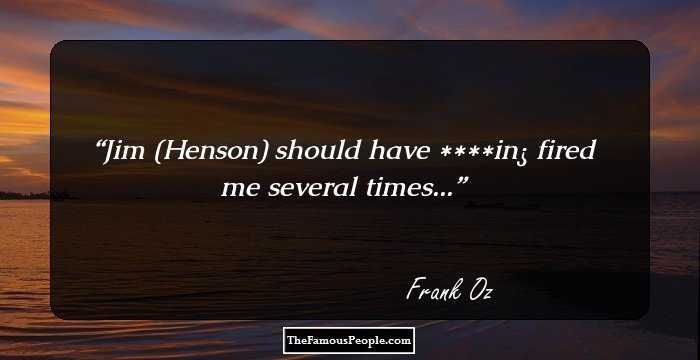 Continue Reading Below
Career
In 1963, he joined the Muppets, Inc. as an associate with ‘Rowlf the Dog’ and later on ‘The Jimmy Dean Show’. He was just 19 at that time. Henson and Oz performed as ‘Scoop and Skip’, ‘Southern Colonel and Nutty Bird’, etc.
A new program for children called ‘Sesame Street’ started in 1969 and Oz invented the characters ‘Bert’, ‘Grover’, and ‘Cookie Monster’, and performed them solely for many years. During this time, he also did minor characters, including ‘Lefty the Salesman’.
During the time between the start of ‘Sesame Street’ and the beginning of ‘The Muppet Show’, Oz was in almost every major Henson production—‘The Great Santa Claus Switch’, ‘The Frog Prince’, and ‘The Muppet Musicians of Bremen’.
By 1976, Henson grew exasperated by the constraints of working on someone else's program. In an attempt to gain creative control over his artistic ideas, Henson produced ‘The Muppet Show’ and Oz became the key creator on the show.
Oz created ‘Miss Piggy’, ‘Fozzie Bear’, and ‘Animal’, ‘Sam the Eagle’, ‘George the Janitor’ and ‘Marvin Suggs’ for ‘The Muppet Show’. He also wrote ‘The Rhyming Song’ and ‘Jamboree’ and was credited as a creative consultant on the show.
In 1980, George Lucas wanted a puppet character for his Star Wars movie, ‘The Empire Strikes Back’. This work was assigned to Oz and he worked as chief puppeteer. He created ‘Yoda’ and was responsible for giving the creature its trademark reversed grammar.
Oz started experimenting with his directorial aspirations as he co-directed ‘The Dark Crystal’ with Henson in 1982. The film used the most sophisticated puppets ever used for a movie. Oz also co-directed ‘The Muppets Take Manhattan (1984)’.
He directed his first movie 'Little Shop of Horrors’ in 1986. The musical starred Rick Moranis, Ellen Greene, Steve Martin and a 15-foot-tall talking plant. The movie established Oz’s talent to direct films that did not include puppets.
Oz directed comedies like: ‘Dirty Rotten Scoundrels (1988)’--starring Steve Martin and Michael Caine, ‘What About Bob? (1991)’-‘Housesitter (1992)’, ‘Bowfinger (1999)’, ‘The Score (2001)’, ‘Death at a Funeral (2007)’, etc.
Continue Reading Below
As an actor he has appeared in movies like: ‘The Blue Brother (1980)’, ‘An American Werewolf in London (1981)’, ‘Superman III (1983)’, ‘Spies Like Us (1985)’, ‘Innocent Blood (1991)’, ‘Blue Brothers 2000 (1998)’, ‘Monsters, Inc. (2001)’, ‘Zathura (2005)’, etc. 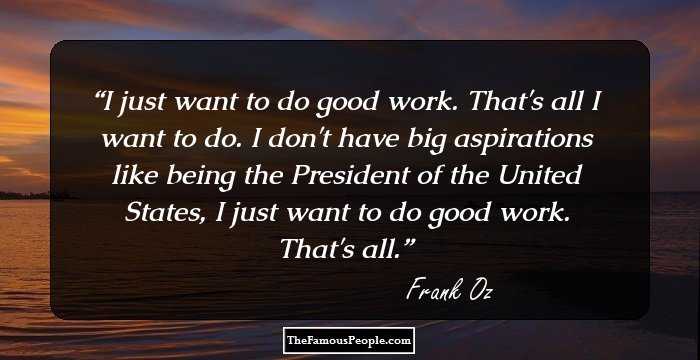 Major Works
Although Oz’s career has been versatile and he has not only worked as a puppeteer but also as a director, actor, and voice-artist, etc. His work, along with Jim Henson, with ‘Sesame Street’ is considered as his top-notch one.
Awards & Achievements
Oz has received many awards for his creative talent. Some of these are News & Documentary Emmy Award (1974), Daytime Emmy Award (1976 and 1978), Primetime Emmy Award (1978) and Art Directors Guild award for Contribution to Cinematic Imagery (2002). 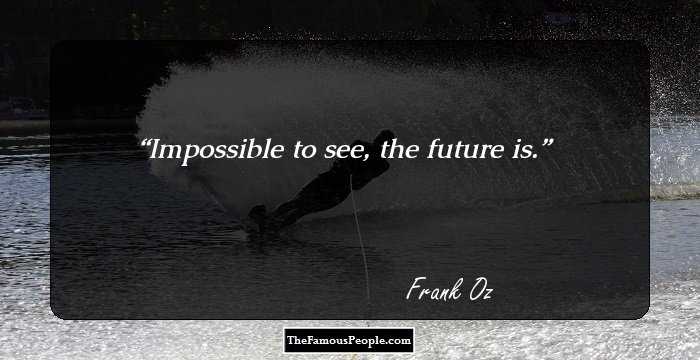 Personal Life & Legacy
Oz has been married twice: Robin Garsen (1979-2005)—the couple had four children together and actress Victoria Labalme (2011-present).
Trivia
The middle three letters of his car's license plate are "PYK", for Piggy, Yoda and Kermit. It is believed to be a coincidence, because it is a standard DMV-issued license plate, not a vanity plate.
He received the prestigious Connor Award, given by the brothers of the Phi Alpha Tau fraternity based out of Emerson College in Boston, Massachusetts.
He has made brief appearances in many of director John Landis' films as he believed Oz to be his good luck charm.

5. Don't Eat the Pictures: Sesame Street at the Metropolitan Museum of Art (1983)

See the events in life of Frank Oz in Chronological Order