Frank Miller is a writer, artist and film director of American origin. He is popular for his dark comic book stories and graphic works of “Ronin” and “Batman : The Dark Knight Returns”. Due to rising popularity of his comic series “Sin City”, he directed and produced an eponymous crime thriller film. He also wrote the script of Hollywood’s science fiction action films ‘RoboCop 2’ and ‘RoboCop 3’. He is against the idea of combining naturalism in comic art. Darker themes and stories were the noteworthy features of his work on Daredevil, a fictional superhero. During the publication of miniseries “Ronin”, he proved his ability as a multitalented person by acting as a writer, penciller, editor, designer and supervisor at the printer. The adult-themed “Ronin” became more popular than his Batman series. His four-part storyline “Batman: Year One” proves his ability as an innovative comics artist. His influential art style has been adapted into a sequence of an episode of ‘Batman: The Animated Series’. Inspired by the 1962 film ‘The 300 Spartans’, he created “300”, a comic book miniseries. Due to its popularity, director Zack Snyder adopted the story of “300” into a successful film. American People
Writers
American Men
Maryland Actors
Tall Celebrities
Childhood & Early Life
Belonging to an Irish Catholic family, Frank Miller is the fifth of seven children of his carpenter father and nurse mother. Born in Olney, Maryland, USA, he grew up in Montpelier, Vermont.
He was fond of comic books during his childhood days. Later, he developed an interest towards graphic entertainment, detective fictions and films. He was much influenced by the works of Jack Kirby, Wallace Wood and Alfred Hitchcock. 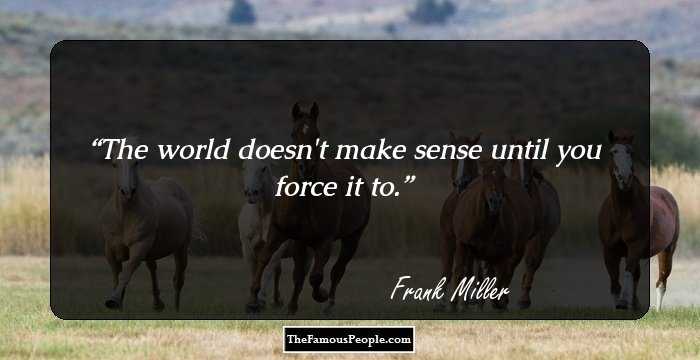 Who Is The Most Popular BTS Member?
Career
‘The Twilight Zone’, an American television anthology series comic book featured his comical artwork and this series is considered as his first published work. But he did not receive any credit for this work.
After working for Western Publishing for a brief period, he joined DC Comics. There he created drawing stories for titles like “Weird War Tales” and also worked on a piece for an anthology collection of Christmas stories. In this piece, for the first time, he presented the character of Batman.
He also worked for the six-page “The Greatest Story Never Told”, written by Paul Kupperberg. In September 1978 issue of “Unknown Soldier”, his work “The Edge of History” appeared.
After joining Marvel Comics, he created comics work on the 17-page story “The Master Assassin of Mars, Part 3” in “John Carter, Warlord of Mars” for November 1978 issue. He also worked there as a regular fill-in and cover artist; his job was to create comic works on a variety of titles.
At that time, he made drawing for “Peter Parker, the Spectacular Spider-Man” for February-March 1979 issue. He included the character of Daredevil in this issue. This issue of Daredevil earned him recognition as a comic artist. At that time, Denny O’Neil joined Marvel Comics as its editor.
Marvel’s January 1981 issue featured Miller’s work both as a writer and penciller. This issue of Marvel Comics introduced the character of ninja mercenary Elektra as the love interest of Daredevil. He portrayed this character as an assassin-for-hire. As its positive impact, the sales of Marvel Comics increased swiftly and it started the publication of Daredevil in every month.
In October 1981 issue of Marvel Comics, he authored and drew a solo Elektra story in “Bizarre Adventurers”. But after a short period, it became quite difficult for him to handle the works of writing and pencilling of Daredevil simultaneously.
He started depending on Janson whom he used to provide rough layouts for pencil and ink so that he could concentrate on writing works. February 1983 issue of Marvel Comics featured the final episode of Daredevil story.
After leaving Marvel Comics, he relocated to Los Angeles to work for DC Comics. His self-created graphic miniseries “Ronin” for which he wrote the story and created drawing appeared between 1983 and 1984.
Continue Reading Below
His “300”, a comic book miniseries appeared in 1999. Inspired by the 9/11 terrorist attacks, he created “Batman: The Dark Knight Strikes Again” in 2001. He also authored the story of “All Star Batman and Robin the Boy Wonder”. 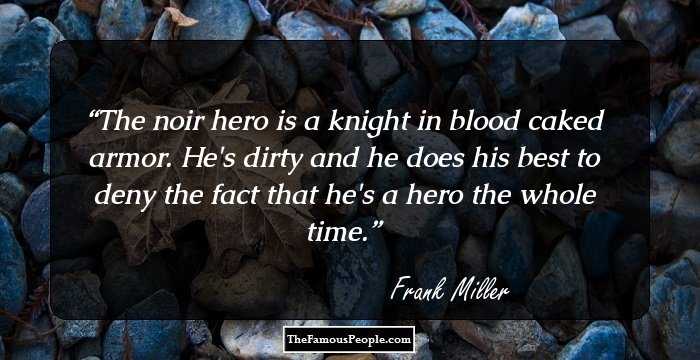 Quotes: Time
Major Works
Along with writer Chris Claremont, he created the miniseries “Wolverine” for September-December 1982 issue. This series of “Wolverine”, a fictional superhero got instant success and secured his place as a popular artist of comic stories.
In 1986, his portrayal of Batman in his groundbreaking series “Batman: The Dark Knight Returns” reflects his modern approach towards this fictional character. The rising popularity of this superhero brought him critical acclaim.
In 1987, along with artist David Mazzuccelli, he published the four -part storyline “Batman : Year One” that earned him wide recognition.
In 1990, together with artist Dave Gibbons, he published “Give Me Liberty”, sci-fi parable.
In 1991, he worked on his “Sin City” story .He drew the entire story in black and white to highlight its film noir style. In 1995, his first story of “Sin City” appeared under the name “The Hard Goodbye”.
In 1993, along with artist John Romita, he worked on a five issue miniseries of “Daredevil: Man Without Fear” under the publication of Marvel Comics. In association with Darrow, his comics work appeared on “Big Guy and Rusty the Boy Robot” in 1995.
Personal Life & Legacy
He married colourist Lynn Varley who coloured several of his famous works which include “Ronin”, “300” and so on. After their divorce in 2005, he has developed a romantic relationship with Kimberly Halliburton Cox. 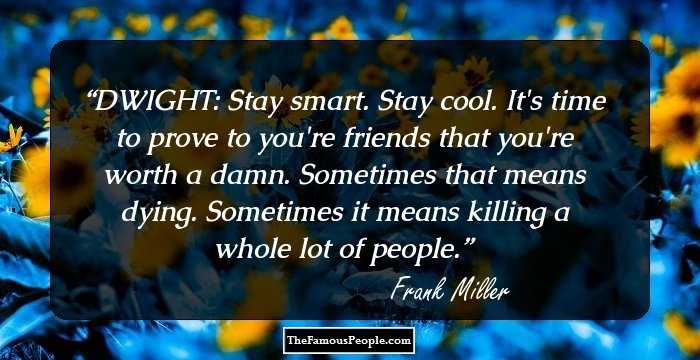 Quotes: Time, Friends
Trivia
This talented comics artist has acted in several small roles in films like ‘RoboCop 2’, ‘Daredevil’ and ‘Sin City”. The interesting fact is that, each of these characters that he played dies in these films.

Quotes By Frank Miller | Quote Of The Day | Top 100 Quotes

See the events in life of Frank Miller in Chronological Order