Advanced Search
Frank Gifford was a famous American football player and television sports commentator who played for the New York Giants of the National Football League (NFL) for 12 years before embarking on a 27-year long career as an announcer and commentator on ABC's ‘Monday Night Football’. He achieved great fame in his playing career as a running back and flanker for the Giants and won the NFL Most Valuable Player Award in 1956. He had played in five league championship games during his high-profile career as a sportsman and was named to eight Pro Bowls. He developed an interest in the show business during his playing career. Tall, well-built, good-looking and popular, he took acting classes during the offseason and appeared in small roles in some feature films during the 1950s. He also worked as a commercial model and product endorser on television, along with hosting a sports show on local radio stations. His phenomenal streak of success continued long after his playing career ended. After retiring from active sports, he became a broadcaster for CBS, covering football, golf and basketball. He soon established himself as a popular commentator with his wit and charm, and touched even greater heights of fame when he became the announcer on ‘Monday Night Football’. He also made it to the headlines often because of his scandalous personal life. Herschel Walker
DID WE MISS SOMEONE?
CLICK HERE AND TELL US
WE'LL MAKE SURE
THEY'RE HERE A.S.A.P
Quick Facts

American Celebrities
University Of Southern California
Male Sportspersons
American Sportspersons
American Football
Childhood & Early Life
Francis Newton "Frank" Gifford was born on August 16, 1930, in Santa Monica, California to Lola Mae and Weldon Gifford, an oil driller. He grew up in poverty during the Great Depression when his father struggled to find work.
He graduated from Bakersfield High School. He loved sports from a young age but was unable to gain an athletic scholarship to the University of Southern California (USC) because of his low grade point average in high school. So he played a season of football for Bakersfield Junior College and made it to the Junior College All-American team and earned the grades needed to enroll at USC. He graduated from USC in 1952. 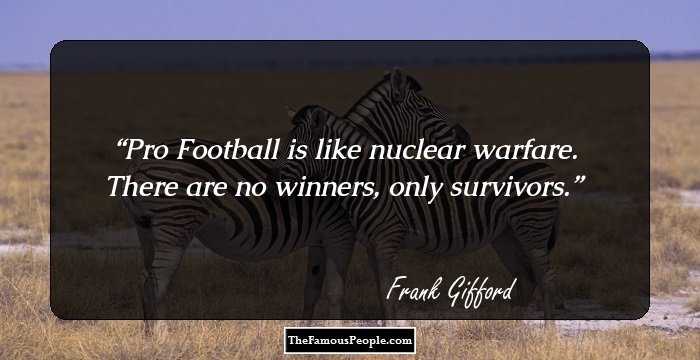 Quotes: Like
Continue Reading Below
Career
He was selected by the NFL's New York Giants with the 11th overall pick of the 1952 draft. His first two seasons with the Giants were difficult and he decided to leave by 1954. However, the Giants’ new head coach, Jim Lee Howell, and offensive coordinator Vince Lombardi talked to Gifford and convinced him to stay. Lombardi also installed Gifford as a permanent left halfback.
Gifford’s performance improved over the ensuing months and he played a pivotal role in the Giants’ victory in the NFL championship in 1955 following which Gifford was voted the league’s MVP. He spent his entire playing career with the Giants playing on both sides of the ball as a defensive back and running back.
He became a very popular player with a huge fan following. Tall, handsome and charming, he made a foray into show business as well, and took acting classes in the offseason in the 1950s. He then played small roles in films like ‘That’s My Boy’, ‘The All American’, ‘Darby’s Rangers’ and ‘Up Periscope’.
He also worked as a commercial model and product endorser on television. Even as an active player with a hectic schedule, he began hosting a sports show on a local radio station and even wrote sports columns.
An unfortunate incident happened in 1960 when he was knocked out by Chuck Bednarik on a passing play during a game against the Philadelphia Eagles. He suffered a serious head injury which kept him out of action for several months.
He returned to the Giants in 1962 as a flanker. He played for a couple of more seasons and amassed several records including touchdowns scored, points and yards gained receiving. He retired as a player in 1964.
Gifford had dabbled in local television and radio even during his playing career and after retirement, he became a broadcaster for CBS, covering football, golf and basketball.
He got his big break in 1971 when Roone Arledge selected him to be the play-by-play announcer on ABC’s ‘Monday Night Football’, then in its second season. He would remain associated with the show for the next 27 years, until 1997.
His broadcast partners on the show were Don Meredith and Howard Cosell, and his low-key style of delivery perfectly counterbalanced the more flamboyant styles of his partners. The show soon became very popular and became the longest-running prime-time sports program in television history.
Continue Reading Below
He also worked as a reporter and commentator on other ABC sports programs including the coverage of the 1972 Summer Olympics in Munich. He also hosted the ‘Wide World of Sports’, then the network’s signature sports program, for many years.
In 1986, Al Michaels took over the role of the play-by-play announcer on the show and Gifford became the commentator. However, he did play-by-play announcements whenever Michaels was covering post-season baseball games for the network.
Awards & Achievements
He was inducted into the National Football Foundation Hall of Fame in 1975 and the Pro Football Hall of Fame in 1977.
Frank Gifford was a two-time Emmy Award winner—Outstanding Sports Personality (1977) and Lifetime Achievement Award (1997).
He became the recipient of the Pete Rozelle Radio-Television Award in 1995.
Personal Life & Legacy
Frank Gifford married his college sweetheart, Maxine Avis Ewart, in 1952. They had three children. This marriage ended in divorce.
His second marriage was to fitness trainer Astrid Lindley. This marriage lasted from 1978 to 1986.
Later in 1986 he married his third wife, television presenter Kathie Lee Johnson. This marriage produced two more children.
In 1997, reports of Gifford’s fling with a former flight attendant Suzen Johnson surfaced. There were also other reports of his extra-marital affairs. Nonetheless, his wife did not divorce him in spite of his infidelities and the couple remained married till the very end.
He died of natural causes on August 9, 2015.

See the events in life of Frank Gifford in Chronological Order