Erica Schmidt is a Princess Grace Award winning writer, theater director, and actress who gained fame for being married to Emmy Award winning ‘Game of Thrones’ star Peter Dinklage. Although much of her recent fame on popular media has been the result of her marriage to Peter, she is theatre heavyweight in her own right. With multiple productions like ‘The Sorcerer’ and ‘All The Fine Boys’ under her belt, she is a force to be reckoned with in the theatre world. She has even acted in the movie ‘Miles from Nowhere’. Her directorial creations ‘Humor Abuse’ and ‘Cyrano’ are considered some of the best works of the past decade. In spite of enjoying massive success in the theatre world, it was her personal life with Peter Dinklage that brought her to the attention of mainstream media. But both she and Peter have consciously made the decision to share as little as possible about their lives, even choosing to stay away from social media. 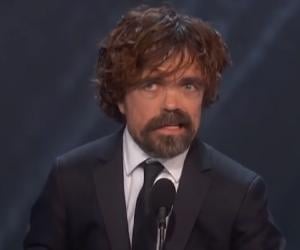 American People
American Women
Vassar College
Gemini Actresses
American Directors
Career & Fame
While studying at Vassar College in 1997, Erica Schmidt was part of the comedy group ‘laughing stock’. The group competed with other groups on weekends in epic comedic performances. After graduating from college, Erica went on to work as a costume designer at ‘Julliard’, while living in Williamsburg, Brooklyn. Her experience at ‘Julliard’ gave her enough motivation to start taking theatre more seriously. She got her first break as a deck stage manager at the ‘St. Mark's Youth and Young Adult Theatre Ministries’ for the production of ‘Jesus Christ Superstar’.
She followed that up with her first major directorial venture in ‘As You Like It’ in 2000. One of her more famous productions during the time was the critically acclaimed ‘Spanish Girl’ (2002). The next year, Erica Schmidt directed ‘Debbie Does Dallas’ which was her first major critical hit. The same year she was also seen in her first acting role in a movie entitled ‘Miles from Nowhere’.
Even with the directorial success, she was enjoying, Erica later admitted in an interview that much of her early years were spent chasing acting dreams. She and her friends like clown theatre-artist Lorenzo Pisoni were in New York struggling to pay rent when she came up with the idea of making a production company. Her intention was that she would direct them and give them acting roles and vice versa. But after her directorial debut, she realized that she had a natural talent for directing theatre. Erica Schmidt’s fortitude was rewarded when in 2001 she received the ‘Princess Grace Award’ for her outstanding work. Erica continued making stellar productions in her directorial ventures likes ‘People Be Heard’ (2004) and ‘Uncle Varya’ (2008).
Consequently, in 2009, she directed ‘Humor Abuse’, which ran from March through April 19, at the ‘Manhattan Theatre Club’. Perhaps her best-known work to date, featuring her old friend and working partner Lorenzo Pisoni, the theatre production remains one of the best ones of the last decade. ‘Humor Abuse’ has since returned multiple times on stage to rave reviews at the ‘Philadelphia Theatre Company’ (late 2009), at the ‘American Conservatory Theater, Seattle Repertory Theatre’ (2011 – 2012), and at the ‘Center Theater Group/Mark Taper Forum’ (2013). It also won her the 2009 ‘Lucille Lortel Award’ for 'outstanding solo show'.
Some of her other critically acclaimed works include ‘The Burnt Part Boys’ (2009) and ‘Invasion’ (2011). In 2015, Erica Schmidt directed her husband, Peter Dinklage, and Emmy nominated actress, Taylor Schilling, in the massively successful ‘A Month in the Country’. She followed this up with critically acclaimed directorial ventures like ‘All the Fine Boys’ (2017) and ‘Cyrano’ (2018). However, most of her mainstream media fame came from being the wife ‘Game of Thrones’ star Peter Dinklage. Once the HBO show became a global phenomenon, Peter became a massive star and consequently, more attention came upon his wife. Some people were surprised to see that Erica, who is over 1.68 meters tall, was married to Peter who suffers from dwarfism. But their lovely relationship has endeared Erica to one and all.
You May Like

Female Film Directors
American Actresses
Actresses Who Are In Their 40s
American Female Directors
Continue Reading Below
Personal Life
Erica Schmidt was born in the USA, on June 8, 1975. Not much is known about her parents on social media as she is very private. She married Peter Dinklage on April 16, 2005, after the couple mischievously eloped. Their first daughter was born on December 2011, and they welcomed their second child on September 2017. The couple has refused to share the name of either child and the gender of their youngest and laughed at false rumors that their daughter was named Zelig.
Recommended Lists: