DID WE MISS SOMEONE?
CLICK HERE AND TELL US
WE'LL MAKE SURE
THEY'RE HERE A.S.A.P
Popularity Index
195
Actors #792
Football Players #23
Sportspersons #164
Quick Facts

Who is Eric Cantona?

Eric Cantona was one of the most dashing football players in the history of French and English football. He initially started from local clubs in France and upon coming to differences with French football scenario, he turned to England. His football career in England lasted for 6 glorious years, in which he scored many goals and became notorious for his aggression on the football field. After achieving many accolades and popularity on football field, he took an early retirement from the sport in 1997 at a very young age of 30. He has sometimes shown his regret at taking that decision, in various interviews, saying that he might have retired from the football at the time when his career was only accelerating. But he did not stop in his life just there. Since his retirement, he has taken part in many social activities and has coached France’s beach football team. He is now a well-known French actor and has acted, produced and directed many English and French movies. Cantona’s dream is to one day manage the Manchester United team, the team he played for in England, and change the face of football.
Recommended Lists: French Men
Tall Celebrities
Tall Male Celebrities
Gemini Actors
Career
Cantona started playing football for his local team, SO Caillolais. This local team was already famous for producing football stars such as Roger Jouve, Jean Tigana, Christophe Galtier, etc. Initially Cantona played as a goal keeper for this team but later on he started playing upfront. With SO Caillolais, he played more than 200 matches.
In 1983, he played for a professional football club for the first time, named Auxerre. In this team he played as a member of youth team for at least 2 years.
In 1984, he got into national service after putting his football career on the hold. In the same year he was discharged from the national service and was lent to Martigues.
In 1986, he signed his first professional contract with Auxerre. In the course of 2 seasons with Auxerre, Cantona made 68 appearances and scored 21 goals.
In 1987, he was fined for the first time when he punched his own team mate, Bruno Martini, in the face and gave him a black eye. Again next year he earned a 3 month suspension for dangerously tackling on Nantes’ Michel Der Zakarian.
In 1988, he signed a record breaking deal of 2.3 million pounds’ deal with Marseille. The same year he was banned from the French team for swearing at the national coach at the time, Henri Michel.
In 1989, during a friendly game against Torpedo Moscow, he kicked the ball in the direction of the crowd and ripped off his shirt and threw it away, his club banned him for a month on the account.
In the same year, he moved to Montpellier on a year-long loan. There he got into fight with his team mates and threw his boots at their faces. The club was on the verge of sacking him but decided to keep him after banning him only for 10 days. The team won the French title.
In 1991, during a Nimes’ match, Cantona threw the ball at the referee after he was unhappy by one of his decisions. This lead to a disciplinary meeting called by the French Football Federation, in which it was decided that he will be banned from the grounds for a month’s time. He called everyone in the hearing committee an ‘idiot’ and his ban increased to 2 months.
On 16 December 1991 Cantona declared his early retirement from the French football. The national team coach and one of his biggest fans Michel Platini advised him to come back. Cantona decided to pursue his football career with England.
In 1992, he came out of his retirement and played for Sheffield Wednesday but walked out of it after being asked to stay in it for a week more. He played his first match in England on a larger scale for Manchester United in Lisbon. He was signed by Manchester United in a deal of 1.2 million pounds.
In 1993, he was fined by FA Cup for spitting on a Leeds fan, at his first game in Elland Road with Manchester United. In the same year, he played in United’s European Cup and was defeated by Galatasaray in Istanbul, Turkey. He accused the referee of cheating, got into trouble with the Turkish police and was subsequently banned by UEFA from four European games.
In 1994, he was voted as the PFA Player of the year. In the same year, he scored 2 goals in the FA Cup final over Chelsea.
In 1995, in a match against Crystal Palace, Cantona kicked off Richard Shaw, after Richard pulled his shirt while playing the game. He also kicked in the crowd and injured Crystal Palace’s fan Matthew Simmons.
In 1996, he played his comeback game against Liverpool. During the same time, Cantona was selected as the captain of Manchester United for the season of 1996-97, due to the departure of Steve Bruce to Birmingham City.
In 1997, he announced his retirement from football at the age of 30. He played his final football game against West Ham.
In 1998, he worked as an actor in the English film called ‘Elizabeth’.
In 2002, he directed a French film called ‘Apporte-moi ton amour’.
In 2005, he coached French beach football team that won the inaugural FIFA Beach Soccer World Cup in Rio de Janeiro.
In 2008, he made a special appearance in the famous Hollywood film called ‘Jack Says’.
In 2009, he co-starred and co-produced films like ‘French Film’ and ‘Looking for Eric’. 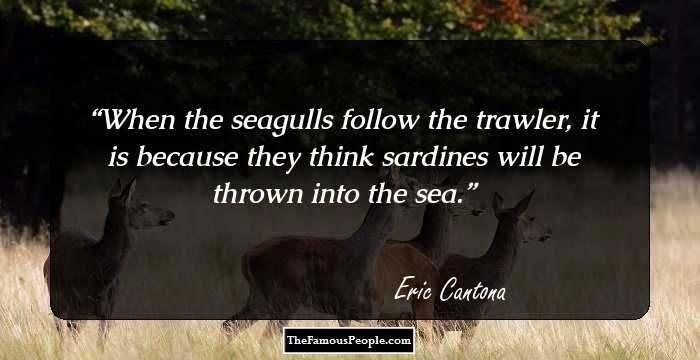 Quotes: Think, Will
Continue Reading Below
You May Like

French Actors
Actors Who Are In Their 50s
Male Sportspersons
French Sportspersons
Awards & Achievements
In 1998, he was included in the 100 League Legends.
In 2002, he was made an inaugural inductee of the English Football Hall of Fame.
In 2003, he received the Overseas Player of the Decade Award at the Premier League 10 Seasons Awards. 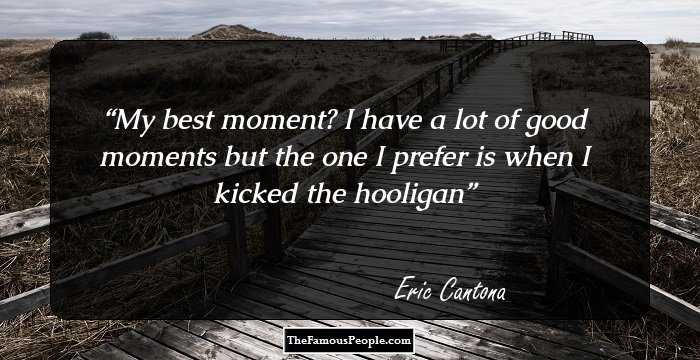 Gemini Football Players
French Football Players
French Film & Theater Personalities
Gemini Men
Personal Life & Legacy
Cantona’s first wife was Isabelle Ferrer and they had two children together, Raphael (born in 1988) and Josephine (born in 1995). Presently, he is married to a French actress called Rachida Brakni.
Trivia
One of the most famous quotes by Cantona is, “When the seagulls follow the Trawler, it is because they think sardines will be thrown into the sea”.
His grandfather from his mother’s side fought the armies of General Franco in the Spanish Civil War, 1938. He got injured in his liver and then came back to France.
Cantona encouraged people to withdraw their money from banks and shun retail banks during the 2010 protests in France.
In 2012, he supported the campaign for the release of the Palestinian footballer Mohmoud Sarsak.
Childhood & Early Life
Cantona was born in Marsielle, France. His father Albert Cantona was a nurse and a painter and his mother, Eleonore Raurich was a dressmaker. His parents were immigrants from Sardinia. He has two brothers, Jean-Marie and Joel.
Recommended Lists:
Film & Theater Personalities #1702
You May Like

See the events in life of Eric Cantona in Chronological Order