Olivier Giroud is French footballer who plays for the Premier League club Chelsea as well as the French national football team. Born in Chambery region of France and raised in Froges, he started his initial training in football as a kid with a local club named Olympique Club de Froges. He shaped up his skills for six years there and at the age of 13, he joined Grenoble, which further set the foundation for his future career as a footballer. At the age of 21, he signed his first official contract with Grenoble. As a part of their reserve team, Olivier scored 15 goals in 15 matches, which brought him into the French football mainstream. It further led him to be loaned away to other clubs such as Istres, Tours and Montpellier. Finally in 2012, he got the attention from the best, the Premier League clubs, particularly Arsenal, which bought him off. Performing magnificently for them, he remained a key part of their main squad until January 2018, when he officially joined Chelsea. In 2011, he made his way into the national seniors’ team and represented his team in several major FIFA tournaments.
Continue Reading Below 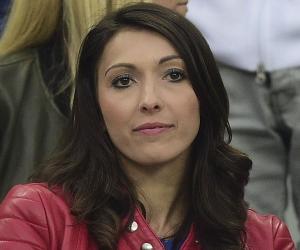 French People
Tall Celebrities
Tall Male Celebrities
Male Sportspersons
French Sportspersons
Childhood & Early Life
Olivier Giroud was born on September 30, 1986, in a little city located in south-eastern France. He had been a football lover ever since he was a kid and the credit goes to his older brother, Romain, who played football for local clubs. Romain would give essential tips to his little brother, but what came across as a major setback was the fact that Romain eventually gave up on his dreams of being a footballer and started studying to become a nutritionist.
He was 10 years older to Olivier and him backing out like this had a massive impact on Olivier’s psyche but he somehow got enrolled into the Olympique Club de Forges, a nearby club. His association with the club came into motion following his family’s move to a little village called Forges. For the following six years, Olivier worked toward honing his skills and by the time he was a teenager, he was a competitive player waiting to get a chance to play in the bigger games.
At the age of 13, professional club Grenoble took him in and very low on confidence knowing how his brothers had given up on his football dreams, Olivier’s performance got affected greatly. He spent five more years in the youth academy of the club, but was never considered a strong player to play in the bigger leagues. Right before the 2005-06 season, he was named into the club’s reserve team, which was all set to play in Championnat de France Amateur 2, which was one of the lowest levels of French football.
Determined to leave a solid mark on the team management, Olivier scored 15 goals in 15 matches that he played in and over the next seven years, his performance kept gaining attention. Finally in March 2006, the senior team management of Grenoble was compelled to call him in for the first team.
Continue Reading Below
You May Like

Famous Beautiful Women With Green Eyes
Career
He made his official senior debut in the 2006-07 season and in February 2007, he scored the maiden professional goal of his career against Le Havre. He later described the moment as one of the happiest of his life. However, his overall performance of scoring 2 goals in 18 appearances in his debut season was considered to be average at best.
He didn’t get enough playing time and in order to make up for it, he joined Istres for the 2006-07 season. For them, he played in the Championnat National, which is considered to be the third level in French football. By the end of the loaning period, the stint was considered to be a success as he managed to score 14 goals for his team in different matches.
As he came back to Grenoble, he came to know that his team was now qualified to be a part of Ligue 1 and Olivier had high hopes to play in major leagues. But somehow, he wasn’t considered ‘fit’ to be a part of the main team and in 2008, the announcement became official that Olivier was to be let go by the team management.
In May 2008, an announcement came to light regarding the association of Olivier with the Ligue 2 club Tours over a three years deal. In Coupe de France during his first season with Tours, Olivier scored 5 goals in the first 2 matches and despite the club’s ouster from the league, Olivier’s performance was hailed. He further kept shining on the field and ended his first season with Tours with 14 goals in 27 appearances.
Montpellier club eyed Olivier and signed him on in July 2010. In his debut match for his new club on 29th July, Olivier scored a goal and was off to a brilliant start. In Coupe de La Ligue, the team reached the final, which was a pleasant surprise and most credit went to Olivier as he consistently scored goals in crucial matches.
The beginning of the 2011-12 season was nothing short of magnificent for Olivier as he scored in the first two league matches of the season. In November 2011, Olivier’s electrifying form had the team standing on the top of the points tally. By the end of the league season, Olivier had scored 21 goals and hence he was awarded with league’s top scorer honour.
During the 2012-13 season, many major clubs were in the line to sign Olivier on and finally, the Premier League club Arsenal won the race. In August 2012, Olivier made his Premier League debut for Arsenal against Sunderland and scored his first goal against Coventry City in the League Cup in September. Towards the end of the season, he missed out on four matches due to the red card shown to him but by then, he had already made his mark with a season score of 17 goals in 47 appearances.
For the next five seasons, Olivier carried on with a magnificent performance and emerged as a star player. During his six season tenure with Arsenal, Olivier made 180 appearances and scored 73 goals in total. In early 2018, his transfer became inevitable and he joined hands with Chelsea on an 18 months contract.
He didn’t get much chance to play in the youth teams and in late 2011, following his match winning performances at the club Montpellier, he was called up for the national team. Playing for his national team, he has made appearances in 69 matches and has scored 29 goals. Since making his debut for the national squad, he has represented his team in 2014 FIFA World Cup and Euro 2016.
Personal Life
Olivier Giroud got married to Jennifer, his long time girlfriend, in 2011 and the couple gave birth to a daughter named Jade in 2011.
He happens to be a catholic and a highly religious man. He has tattooed a psalm from Bible on his right arm.
He has also been the centre of controversy quite a few times and has been accused of cheating on his wife with a model named Celia Kay and issued an public apology. However, he later denied having any extra-marital affair.

See the events in life of Olivier Giroud in Chronological Order