Eldridge Cleaver was a renowned political activist and leader of the Black Panther Party. As a writer, he is remembered for his collection of essays titled “Soul On Ice”. This book is considered as a seminal work in African-American literature. As a prominent figure of the black power movement of the late 1960s, he acted as Minister of Information and Head of the International Section of the Panthers. When he was a teenager, he was involved in several criminal activities and had spent time in detention centres and prison. As an important member of the Black Panther Party, he got involved in an ambush of Oakland police officers. To avoid police arrest, he spent several years in exile in Cuba, Algeria and France. After his return to the US, the activities of various Christian groups kept him occupied. It was at this time that he became a conservative Republican. He also served for the Black Chamber of Commerce in San Francisco for a short period. Besides these, he used to teach at a Bible college in Miami. In later period of his life, he went through legal difficulties for becoming a drug addict, possessing drug and getting involved in a burglary. American Celebrities
African American Authors
Writers
Black Leaders
Black Writers
Childhood & Early Life
Born in Wabbaseka, Arkansas, Eldridge Cleaver’s father was a waiter and musician. His mother was a teacher. His family moved to Phoenix, Arizona during his childhood days. Later, they shifted to Los Angeles.
As a teenager, he spent a brief period in several detention centres for his involvement in petty crime. He was even convicted of a felony drug charge for which he was imprisoned at the adult prison of Soledad, California.
In 1958, police detained him on a charge of rape and assault with intent to murder for which he was imprisoned at Folsom State Prison, Californian. Later, he was moved to San Quentin State Prison, California. 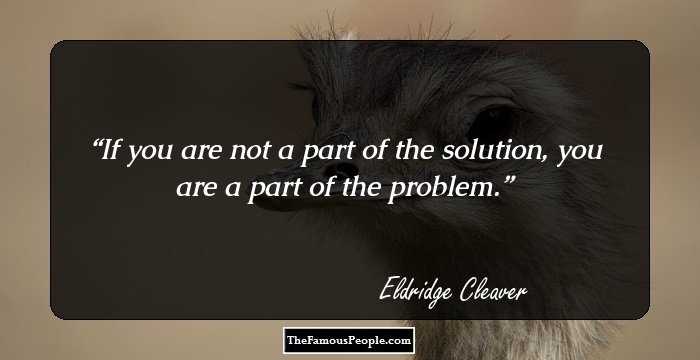 Quotes: You
Continue Reading Below
Later Life
During his days in prison, he remained busy in writing a number of philosophical and political essays. ‘Ramparts’ magazine first published these writings of Cleaver.
After his release from prison in 1966, he joined the Black Panther Party, a black revolutionary socialist organization located in Oakland, California. He acted as Minister of Information of this party.
In association with Marvin X, Ed Bullins and Ethna Wyatt, he set up the Black House political centre in San Francisco in 1967. In the next year, he was a Presidential candidate on the ticket of the Peace and Freedom Party.
In the same year, he led an ambush of Oakland police officers. At the time of the ambush, two officers were wounded. When he was charged with attempted murder he escaped to Cuba. Later he went to Algeria.
In Algeria, he lived with Timothy Leary, an American psychologist and writer who used to promote the usage of psychedelic drugs. Due to Leary’s involvement in the promotion of drugs, Cleaver placed him under revolutionary arrest. In 1972, he left Algeria and went to France.
In 1975, he came back to the United States and became a ‘born again Christian’. At that time, he went through legal difficulties arising from his involvement in the armed Panther attack on Oakland police in 1968.
The long legal wrangling resulted in his conviction to probation for assault. Finally in 1980, he confessed about his role in leading the Panther group on a deliberate ambush of the police officers.
During 1980s, he became a conservative Republican and made public appearance at several Republican events. On December 11, 1983, he was baptized into The Church of Jesus Christ of Latter-day Saints.
In 1988, he was on probation for burglary. He was also imprisoned that year after testing positive for cocaine. After two years, he entered drug rehabilitation centre.
Continue Reading Below
Later, Oakland and Berkeley Police arrested him for possession of drug. At the time of his death, he acted as a diversity consultant at the University of La Verne, located near Los Angeles. 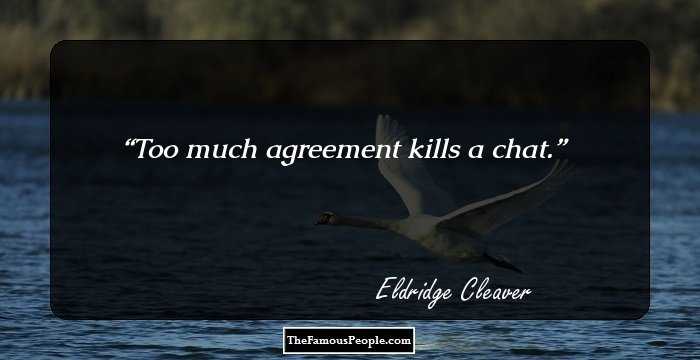 Major Works
He published his collection of political and philosophical essays in the form of a book titled “Soul on Ice” in 1968. He divided the essays of this book into four thematic sections.
The section “Letters from Prison” states about his experience and thoughts on criminal activities. The episode of “Blood of the Beast” expresses his view about race relations and supports the ideology of black liberation.
The section “Prelude to Love – Three Letters” are the collection of his love letters that he wrote for his attorney Beverly Axelrod. The part of “White Woman, Black Man” discusses his opinion on gender relations, black masculinity and sexuality.
In 1978, he published “Soul on Fire”. This book is a vivid account of his days in exile in Algeria. In it, he stated about the regular stipends from the government of North Vietnam.
Personal Life & Legacy
On December 27, 1967, he tied the nuptial knot with Kathleen Neel Cleaver with whom he had a son, Ahmad Maceo Eldridge Cleaver and two daughters, Joju Younghi and Patrica Cleaver. He divorced Kathleen in 1987.
He passed away at the age of 62 at Pomona Valley Hospital Medical Centre in Los Angeles due to cancer. He was buried at Mountain View Cemetery in Altadena, California. 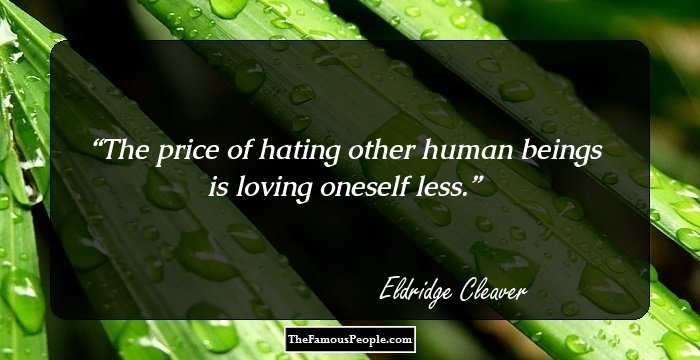 Trivia
This influential political activist confessed about his act of raping several black women and white women in his book, “Soul on Ice”. This controversial book depicts his transformation from a drug dealer and “insurrectionary” rapist into a Marxist revolutionary.

Quotes By Eldridge Cleaver | Quote Of The Day | Top 100 Quotes

See the events in life of Eldridge Cleaver in Chronological Order