(Irish Comedian and Actor Known for His Films: ‘Shaun of the Dead’ and ‘Run Fatboy Run’)

Advanced Search
Dylan Moran is a stand-up comedian most famous for his performances in the television sitcom ‘Black Books’ and in the movie ‘Shaun of the Dead’. Loved by his fans for his sarcastic humour and observational comedy, he is also one of the shiest ever comedians to have graced the big screen. His reluctance to give interviews and the measures he takes to keep his personal life out of the limelight is well-known in the industry. Counted among the Channel 4’s Greatest Stand-Ups twice, he had joined the comedy world when he was just 20. After quitting school in his teens and wasting away some years he began performing at the Comedy Cellar in Dublin. He was well received from the outset and won the ‘So You Think You're Funny’ Best Newcomer's award at the Edinburgh Festival after just a year. The confused youngster had finally found his calling and plunged head-on into a career in comedy. He created a one-man show called ‘Gurgling for Money’ which was his first major stand-up tour of the U.K. His popularity led to offers of television roles and he soon branched out into movies as well. The lovable comedian however disappoints his fans on just one account—he hates to give interviews or talk about his personal life—a fact that has been parodied on one of his DVD releases. Jonathan Rhys M...
DID WE MISS SOMEONE?
CLICK HERE AND TELL US
WE'LL MAKE SURE
THEY'RE HERE A.S.A.P
Quick Facts

Irish People
Comedians
Irish Men
Irish Actors
Scorpio Actors
Childhood & Early Life
Dylan Moran was born in Ireland into a working class family; his father was a carpenter. Due to his shy nature, Dylan never reveals much about his family or personal life.
He attended St. Patrick’s Classical School where he began experimenting with stand-up comedy. He thoroughly hated academics and school, and dropped out at the age of 16.
The confused teenager spent four years drinking and wasting his time. He tried working as a florist but left the job within days. 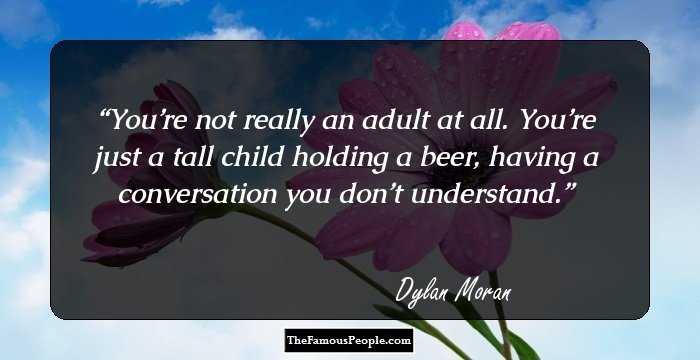 Quotes: You
Continue Reading Below
Career
He was inspired to try his hand at comedy after watching comedians like Ardal O Hanlon. He began performing stand-up acts at a small comedy club in Dublin called the Comedy Cellar in 1992.
The upcoming comedian was well received by the audience and he won the ‘So You Think You’re Funny’ award at the Edinburgh Festival in 1993—just a year after his venture into the field.
Encouraged by his success, he created his own one-man show called ‘Gurgling for Money’ which he performed as he toured all over the U.K.
He performed comedy at various festivals like Hay Festival, Montreal Comedy Festival and Edinburgh Festival. In spite of not having any formal education, he wrote a weekly column for ‘The Irish Times’ from 1995 to 1997.
His popularity as a stand-up comedian led to offers of television roles. He made his television debut in 1998 as the na�ve Ian Lyons in the television sitcom ‘How Do You Want Me?’ opposite Charlotte Coleman.
He landed a small role as Rufus the thief in the romantic comedy film ‘Notting Hill’ in 1999.
He co-wrote and starred in the sitcom ‘Black Books’ that was aired on Channel 4 from 2000 to 2004. It revolved around the life of a drunken, chain-smoking, disorganized London bookshop owner Bernard Black played by Moran. It was a critical success and won a number of awards.
In 2004 he got his first major film role. He played David in the zombie comedy, ‘Shaun of the Dead’ which went on to become a big commercial as well as critical success.
He toured New York, Milan, Britain and Ireland where he performed his new shows ‘Monster I’ and ‘Monster II’ in 2004. He also made an appearance at the London’s Palace Theatre and the Hay Festival. DVDs of the shows were also released later on.
Continue Reading Below
In May 2005, he opened his show ‘Like, Totally’ at the Buxton Opera House. A DVD of the tour was released shortly.
Along with comedians Ardal O’Hanlon and Tommy Tierman, he performed in ‘The Three Fellas’ at the Echo Arena. This one-off comedy event was a part of the ‘European Capital of Culture 2008’ celebrations.
He acted as Pierce, a struggling actor, in the 2008 black comedy ‘A Film With Me In It’. The film received positive reviews.
His stand-up tour ‘Yeah, Yeah’ began in April 2011 during which he traveled to various places like Australia, U.S., New Zealand, Ireland, Scandinavia and the Baltic states.
His recent films include ‘The Decoy Bride’ (2011) and ‘Good Vibrations’ (2012). 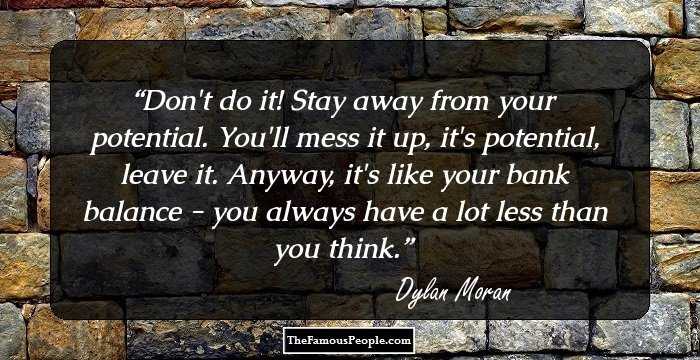 Quotes: You, Think, Like
Major Works
The sitcom ‘Black Books’ which he created and starred in was the work that established his career success. It was a big hit that ran for four seasons and was called a ‘hugely popular series’ by ‘The Times’.
Awards & Achievements
He won the Perrier Award at the Edinburgh Festival in 1996 at the age of 24, becoming the youngest ever individual to win the award.
‘Black Books’, the television comedy show created by him won the BAFTA Award for the Best Situation Comedy twice (2001 and 2005). 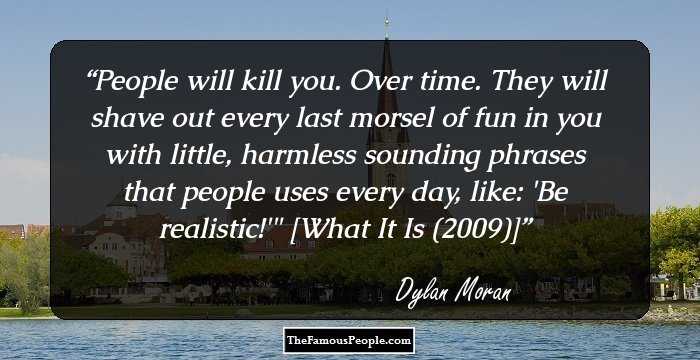 Quotes: You, Time, Will
Personal Life & Legacy
He met Elaine, an employee at The Gilded Balloon in Edinburgh during one of his performances there. The couple got married in 1997 and has two children.
Trivia
He got married on the day of Princess Diana’s funeral.
He has been named among Channel 4’s 100 Greatest Stand-ups twice.

Quotes By Dylan Moran | Quote Of The Day | Top 100 Quotes

See the events in life of Dylan Moran in Chronological Order