Advanced Search
Doris Lessing was a prolific Nobel Prize winning writer, who penned more than fifty books. It is difficult to slot her works under a single heading for they include many genres - novels (literary and science fiction novels), autobiographies, short stories, plays and essays, and address various topics such as racial inequalities, women’s liberation, communism, and ethics with great candor. Martha Quest, the protagonist of her ‘Children of Violence’ series of novels, is very much a reflection of herself. She invited criticism for creating a character who "tries to live with the freedom of a man". In actual life too, she left her two young children behind with their father so she could pursue her literary ambitions. She switched to Science fiction with ‘Briefing for a Descent into Hell’, ‘Canopus in Argos: Archives’, ‘Memoirs of a Survivor’, and ‘The Cleft’. She felt that “in science fiction is some of the best social fiction of our time”. Her other novels include ‘The Grass Is Singing’, ‘The Good Terrorist’, ‘The Fifth Child’, ‘The Diary of a Good Neighbor’, and ‘If the Old Could’. ‘Under My Skin: Volume One of My Autobiography, to 1949’, her brilliant autobiographical work, won much critical praise and numerous accolades. Also Known As: Doris May Lessing, Doris May Tayler

British Celebrities
Zimbabwean Celebrities
Novelists
British Women
Zimbabwean Women
Libra Writers
Childhood & Early Life
Doris Lessing was born to British couple, Emily Maude and Captain Alfred Tayler. Alfred’s leg was amputated during his WWI service; he was employed as a clerk for the Imperial Bank of Persia.
In 1925, the family shifted to Southern Rhodesia, then a British colony, where they farmed on a land owned by Alfred. They could not afford the Edwardian lifestyle that Emily yearned for.
Doris attended the Dominican Convent High School, a Roman Catholic school in Salisbury until she was fourteen. She began to work as a nursemaid, and would read any material that her employer gave her.
She was employed as a telephone operator in Salisbury. In the next few years, following her marriage to Frank Wisdom at nineteen, two children were born to her. She divorced her husband in 1943. 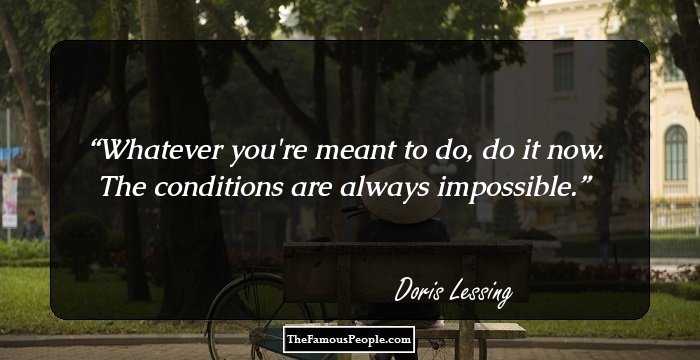 Continue Reading Below
Career
Lessing was attracted to the Left Book Club, a Socialist publishing club. She joined the group, married and later divorced her second husband Gottfried Lessing. She shifted to London with her son, Peter.
Her first novel, ‘The Grass Is Singing’, was published in 1950. Set in Southern Rhodesia of the decade before, it describes the racial tension there. The book created a stir in the literary circles.
From 1952 to 1969, she penned a series of five novels –‘Children of Violence’, depicting its protagonist, Martha Quest’s life time from a rebellious teenager to an active independent old woman.
Shortlisted for the Booker Prize, her novel, ‘Briefing for a Descent into Hell’, published in 1971, takes us on a terrifying psychological voyage to the inner recesses of our minds.
Her 1974 novel, ‘Memoirs of a Survivor’, is a dark futuristic work set at a time when people are fighting for survival in a barbaric world, having no family values or morals.
‘Canopus in Argos: Archives’, a series of five soft science fiction novels published between 1979 and 1983, portray various societies at different stages of development, and show the influence of Sufism.
In the eighties, she published two novels, ‘The Diary of a Good Neighbor’, and ‘If the Old could’ under the pseudonym, Jane Somers. The novels have a common protagonist, Janna Somers.
‘The Fifth Child’, a metaphorical short novel published in 1988, illustrates the adjustments in the happy life of a married couple after the birth of Ben, a violent and dysfunctional child.
‘The Sweetest Dream’, published in 2001, covers the period from the1960s to 1980s. The novel begins in the 1960s leading up to the 1980s, and is set mostly in the fictional African nation, Zimlia.
Continue Reading Below
‘The Cleft’, published in 2007, is the history of the Clefts, an ancient community of women, narrated by an old Roman senator. The Clefts always produced female; the birth of a boy threatens them.
‘Alfred and Emily’, the 2008 novel is both fictional and biographical. The first part imagines how her parents would have lived had the first world war not happened, while the second part describes how they actually survived.
She has written several nonfiction works, including books about cats, ‘Under My Skin: Volume One of My Autobiography, to 1949’, and ‘Walking in the Shade’, the second volume of her autobiography.
She performed the Librettos in two operas, ‘The Making of the Representative for Planet 8’ and ‘The Marriages between Zones Three, Four and Five’, composed by Philip Glass. 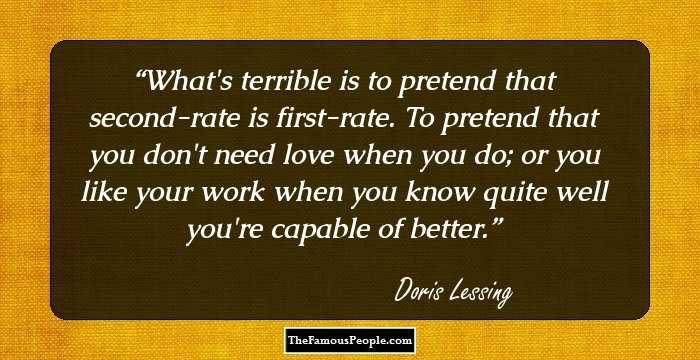 Quotes: You, Love, Like, Need
Major Works
Lessing’s 1962 novel, ‘The Golden Notebook’, is an anti-war and anti-Stalinist statement, and scrutinizes the women's liberation movements. Included to TIME’s 100 best English-language novels list, this masterpiece was translated to many languages.
Her 1985 novel ‘The Good Terrorist’ has Alice Mellings, a veteran squatter, as the protagonist. It explains how individuals inspired by revolutionary ideas transform into actual terrorists by circumstances, and is relevant even now.
Awards
In 1976, Lessing’s novel, ‘The Golden Notebook’, was awarded The Prix M�dicis, a French literary award given to new writers. Ten years later, she won the WH Smith Literary Award for ‘The Good Terrorist’.
In 1994, the writer won two major awards for her autobiographical work, ‘Under My Skin: Volume One of My Autobiography’ – James Tait Black Memorial Prize and the Los Angeles Times Book Prize.
Continue Reading Below
Her contribution to literature was recognized with the Austrian State Prize for European Literature, The David Cohen Prize, Prince of Asturias Award, and The Golden Pen Award.
She declined an OBE in 1977, as the “Empire is non-existent”. She was appointed Companion of Honor for "conspicuous national service" and named a Companion of Literature by the Royal Society of Literature.
In 2007, she was awarded the Nobel Prize for Literature, becoming the 11th woman to win the prestigious prize. The Swedish Academy described her as an "epicist of the female experience”. 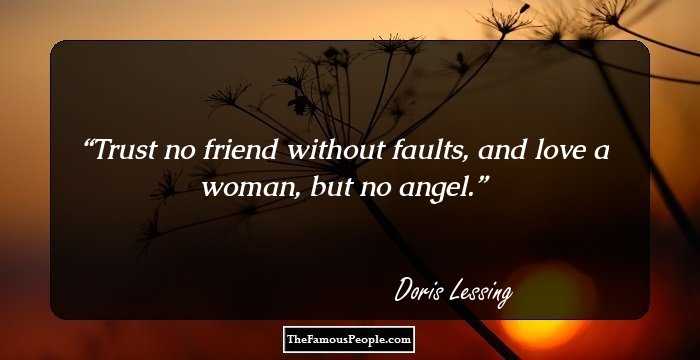 Quotes: Love
Personal Life & Legacy
Lessing had two children from her first husband Frank Wisdom – John and Jean.
Her second marriage to Gottfried Lessing produced a son, but the marriage ended in a divorce in 1949.
Putting her career before her children, she left her children from her first marriage and moved to London. She declared, “I felt I wasn't the best person to bring them up”.
Doris Lessing died on 17 November 2013, at the age of 94, at her home in London.
Trivia
The Memoirs of a Survivor was adapted into a film directed by David Gladwell, while a play based on the book was performed at The Festival Theatre.
This writer declared, “That is what learning is. You suddenly understand something you`ve understood all your life, but in a new way”.

Quotes By Doris Lessing | Quote Of The Day | Top 100 Quotes

See the events in life of Doris Lessing in Chronological Order