Don Marquis was a renowned newspaper columnist, journalist and novelist of America. Some of his books include “Cruise of the Jasper B”, “Pandora Lifts the Lid” and so on. As a skilled humorist, he introduced popular characters like Archy the cockroach and Mehitabel the Alley Cat to express his opinion on various issues in a humorous way. In an attempt to ridicule the U.S. Constitution’s amendment regarding prohibition of sale and consumption of alcoholic products, he created the character of Old Soak through his “Sun Dial” column of “The Evening Sun” newspaper. This specific column became popular for its perfect combination of quips, commentary and humorous verse. Through this column, he ridiculed several personalities of that era. The character of Old Soak became so popular that a Broadway play was made on it. Moreover, this fictional character acted as an inspiration for a silent film, “talkie” and a radio drama. He became a finalist for three times for the O. Henry Memorial Prize for his remarkable creation of short fiction. As author of 35 books, he co-wrote for the films like ‘The Spots Pages’, ‘Shinbone Alley’, ‘The Good Old Soak’ and ‘Skippy’. The story of the film ‘The Cruise of the Jasper B’ is loosely based on one of his novels. American Celebrities
Journalists
American Men
Leo Writers
Male Writers
Childhood & Early Life
Don Marquis was born and grew up in Walnut, Illinois, United States.
His brother David passed away at the age of twenty in the year 1892.
He attended Walnut High School from where he graduated in 1894. Thereafter he attended Knox Academy in 1896 but after three months, he left the institution. 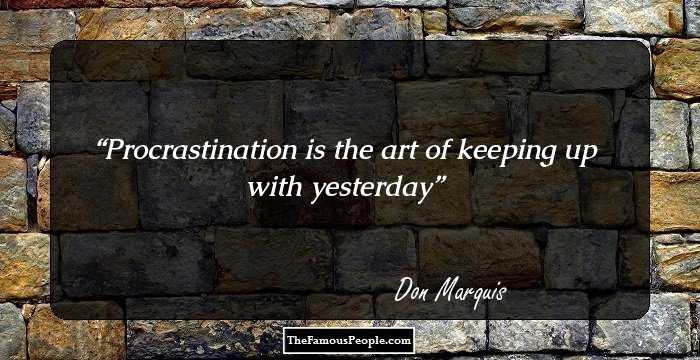 The Best Black Actresses Of All Time
Career
He started his newspaper carer with setting type and writing columns for small-town weeklies. For a brief period, he worked as a reporter in Washington, D.C. and Philadelphia.
From 1902 to 1907, he worked on the editorial board of the Atlanta Journal and contributed a number of editorials.
In 1907, he took a job with Joel Chandler Harris as an associate editor of the New Uncle Remu’s Magazine. He got nationwide recognition for his work in this magazine.
In 1909, he shifted to New York where he worked for several newspapers. In 1912, he served for “The Evening Sun”, a New York based newspaper. For the next eleven years, he edited a daily column “The Sun Dial”.
After leaving “The Evening Sun”, he joined “New York Tribune” which was later renamed as the “New York Herald Tribune”. He got recognition for his daily column “The Tower” published in this paper. Within a few months, the name of the column was changed to “The Lantern”.
Initially he enjoyed working at the “Herald Tribune”, but gradually he started feeling exhausted. Unable to bear work pressure, he left the paper.
After leaving “Herald Tribune”, he wrote a weekly column for Collier’s magazine for several years. This magazine also published his short stories and opinion pieces regularly.
He used to write regular columns and short stories for several newspapers and magazines like “Saturday Evening Post”, “Harper’s”, “Scribner’s”, “Golden Book” and “Cosmopolitan”.
After his successful stint as columnist in newspapers and magazines, he pursued a career as a playwright. The first play that he authored was “The Old Soak” which received success on the stage.
Continue Reading Below
He also tried his hands at writing scripts for films. He wrote the script of 1932 successful film ‘Skippy’ and several other movies. Two of his popular books “The Old Soak” and “ The Cruise of the Jasper B” were made into films .
After returning to New York, he spent most of his time at Players, a private club. After living a period of self-imposed exile, he published several volumes of his works.
During this time, he published his 1935 volume “Archy Does His Part” which is the third and final collection of Archy and Mehitabel series. Before his death, he was working on an autobiographical novel titled “Sons of the Puritans”. He left the responsibility of completion of this work to his friend “Kit” Morley. 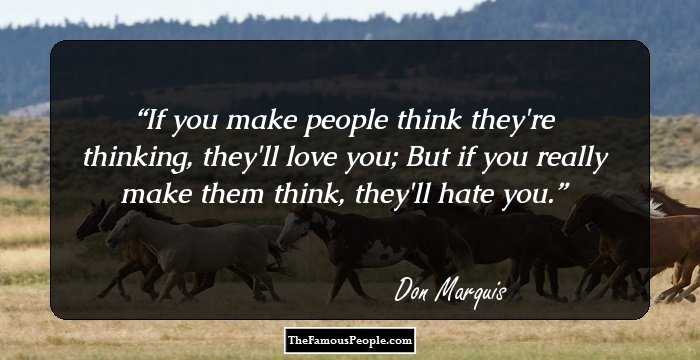 Quotes: You, Love, Think
Major Works
In 1916, he introduced Archy, a fictional cockroach character whom he described as a free-verse poet in its previous life. Archy supposedly used to leave poems on his typewriter by jumping on the keys.
Beside Archy, he also introduced the character of Mehitabel, a fictional cat and Archy’s best friend. The other characters that he presented were Pete the Pup, Clarence the ghost and Warty Bliggins and an egomaniacal toad.
Personal Life & Legacy
In 1909, he tied the nuptial knot with Reina Melcher, a freelance writer and novelist. They had a son, Robert and a daughter Barbara. Reina died on December 2, 1923.
In 1926, he married actress Marjorie Potts Vonnegut who passed away in her sleep on October 2, 1936.
He breathed his last after suffering three strokes which partly disabled his body.
To honour his memory, the United States Navy christened a Liberty ship, the USS Don Marquis on August 23, 1943. 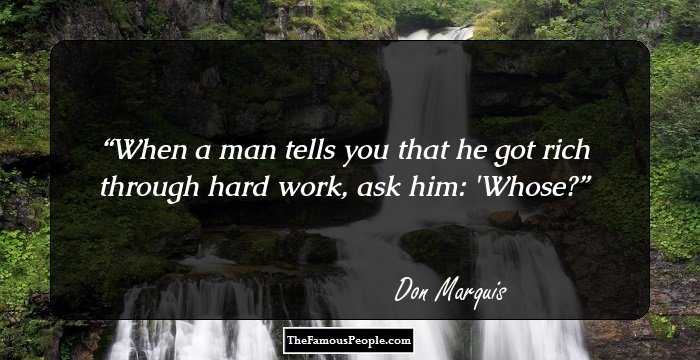 Quotes: You
Trivia
Though this renowned humorist and playwright tried his hand at writing scripts for Hollywood films, yet he was reluctant to continue this work in later period of his life. Before leaving Hollywood, he wrote a poem on the brutal treatment of writer by the film industry.
You May Like

Quotes By Don Marquis | Quote Of The Day | Top 100 Quotes

See the events in life of Don Marquis in Chronological Order