Donnie Wayne Johnson, popularly known as Don, is an American actor, producer, director, singer, and songwriter. Initially, he wanted to become a professional bowler. However, he began to take interest in acting after becoming involved in his school theatre programs. After graduation, he studied drama at ‘American Conservatory Theatre’ in San Francisco. Although he got his first major role at the age of 20, it took him some time to establish himself as a star. His fortune changed for the better when he got an opportunity to play the role of ‘Sonny Crockett’ in the popular television series ‘Miami Vice.’ He then became a star overnight. Once the series ended, he was invited to play the lead role in many well-known films and television serials. Till date, he has more than 90 film and TV titles to his credit. Over the years, he has also released three music albums, which have been well-received by music lovers. Despite having a successful career, Don has had his share of problems. In 2008, he almost lost his Colorado ranch because of his $14.5 million debt. His personal life too has been marred with divorces and separations Donnie Wayne Johnson was born on December 15, 1949, in Flat Creek, Missouri, USA. His father Wayne Fred Johnson was a farmer, while his mother Nell Johnson was a beautician. When he was six years old, the family moved to Wichita, Kansas.

In Wichita, Don studied at ‘Wichita South High School.’ Here, he took part in various plays, such as ‘Burnt Cork and Melody,’ ‘The Hullabaloo,’ and ‘West Side Story.’

Don graduated from ‘South High School’ in 1967 and enrolled at the ‘University of Kansas’ for a brief period. Later, he shifted to the ‘American Conservatory Theatre’ in San Francisco to study drama. 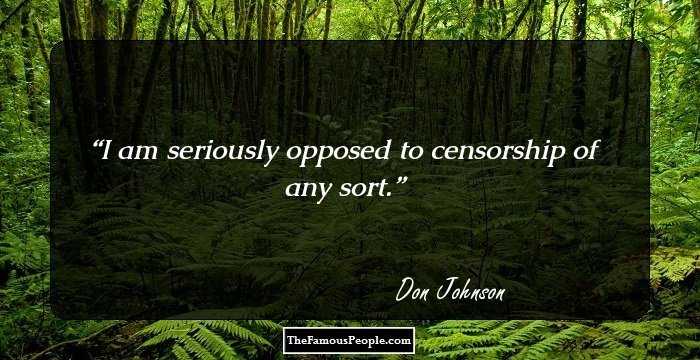 Don Johnson landed his first major role in 1969. He played the lead role of ‘Smitty’ in ‘Fortune and Men’s Eyes,’ a Los Angeles stage production. His performance caught the attention of film director Leonard J. Horn and Don landed the role of ‘Stanley Sweetheart’ in ‘The Magic Garden of Stanley Sweetheart’ (1970). However, the film was a box office flop.

He then continued working in several commercials, television shows, and films. Films and television series like ‘Zachariah’ (1971), ‘The Harrad Experiment’ (1973), ‘Lollipops, Roses and Talangka’ (1974), ‘A Boy and His Dog’ (1975), and ‘Revenge of the Stepford Wives’ (1980) are some of his notable works during this period.

Although Don received critical acclaim and ‘Best Actor Award’ for ‘A Boy and His Dog,’ it did not have any positive effect on his career. Finally in 1984, Don got his first real break when he landed a role in a television series titled ‘Miami Vice’ (1984 to 1989). In this series, Don appeared as an undercover police detective named ‘Sonny Crockett.’ The role brought him instant stardom.

In 1985, he landed a substantial role in a television miniseries titled ‘Ben Quick.’ It was the TV remake of ‘The Long, Hot Summer.’ The role added to his popularity. However, he had to wait till 1996 to land a role as substantial as the one he played in ‘Miami Vice.’

From 1996 to 2001, Don Johnson starred in a television police drama titled ‘Nash Bridges.’ In this series, he played the role of ‘Nash Bridges,’ Inspector/Captain of San Francisco Police Department. He was the only member of the cast to appear in all 122 episodes of the series.

In 2005, Don played a cynical and alcoholic lawyer in a short-lived courtroom drama called ‘Just Legal.’ Although eight episodes were filmed, the series was canceled after three episodes. However, these episodes had a rerun the following year, after which five unaired episode were discarded.

In 2007, Don took part in a musical called ‘Guys and Dolls.’ It was a West End of London production and Don played the role of ‘Nathan Detroit.’

In 2008, he starred in a Norwegian comedy film called ‘Lange FlateBall�r 2.’ In this film, he played the role of ‘Admiral Burnett,’ an admiral in the US navy. The same year, he was also seen in films like ‘Torno a vivere da solo’ and ‘Lange Flate Ball�r II.’

Don Johnson next appeared as the father of the protagonist in a film called ‘When in Rome’ (2010). In 2010, he was also seen in ‘Southern Discomfort,’ a comedy film which showcases how a father’s life is disrupted when his grown up children move back home.

In 2010, he appeared as ‘Von Jackson’ in an action film titled ‘Machete,’ which was released in September 2010. From October, Don began appearing in a sports comedy television series called ‘Eastbound and Down.’ In the series, he played the role of ‘Eduardo Sanchez Powers,’ the long lost father of protagonist ‘Kenny Powers.’

In 2012, he played the role of ‘Spencer "Big Daddy" Bennett’ in a black comedy film titled 'Django Unchained.' The film was a huge hit and earned many nominations and awards.

�In 2014, he appeared as ‘Sheriff Earl McGraw’ in seven episodes of the television series ‘From Dusk till Dawn.’ The same year, he appeared in films, such as ‘The other Woman,’ ‘Alex of Venice,’ and ‘Cold in July.’

In 2015, Don Johnson started appearing in a prime time soap opera titled ‘Blood and Oil.’ In this series, he played ‘Harlan "Hap" Briggs,’ an oil tycoon and family patriarch. Apart from playing the role, he was also the executive producer of the series. It was premiered on September 27, 2015, in ABC.

He starred as ‘Arthur,’ the love interest of ‘Vivian,’ played by Jane Fonda, in Bill Holderman's romantic-comedy film ‘Book Club’ in 2018.

The following year, he played the role of ‘Richard Drysdale’ in Rian Johnson's murder-mystery film ‘Knives Out.’ He also starred in the series ‘Watchmen.’ 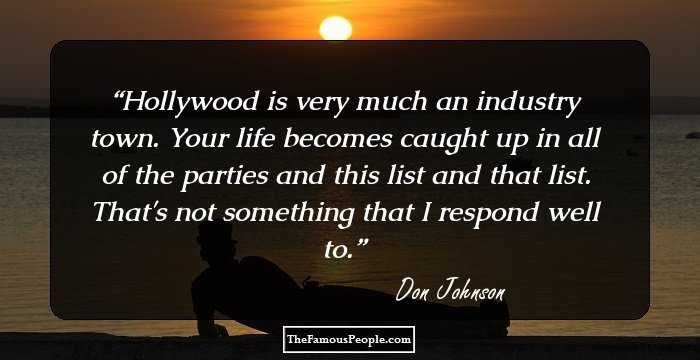 He has three albums to his credit so far. His first album ‘Heartbeat’ released in 1986. It was a major hit, and the title track peaked at fifth position on ‘Billboard Hot 100’ singles chart. His second album ‘Let It Roll’ released in 1989. In 1997, he released a compilation album titled ‘Essential.’

Don also has a number of single hits to his credit. Some of his hit singles are ‘Heartbeat,’ ‘Heartache Away,’ ‘Voice on A Hotline,’ ‘Tell It Like It Is,’ ‘Other Peoples Lives,’ and ‘A Better Place.’ His duet ‘Till I loved You’ was also a big hit.

In addition, Don has also co-written numerous songs that have become all-time hits. ‘Blind Love,’ ‘Can’t Take It With You,’ and ‘Till I Loved You’ are some of them.

‘A Boy and His Dog’ was Don Johnson’s first major film. He received his first award for his performance in the film.

‘Miami Vice’ was Don’s first major television series. It not only brought him instant stardom, but also a ‘Golden Globe Award.’ 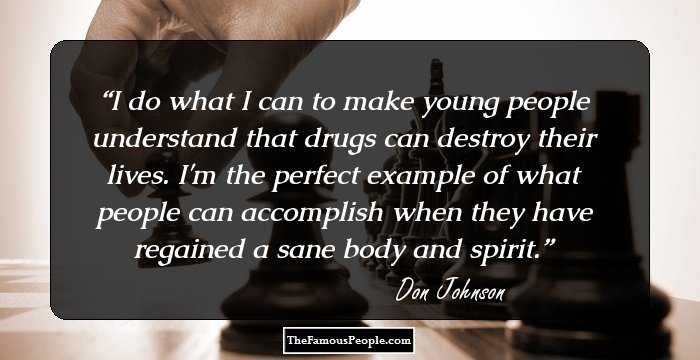 In 1970, he was honored by the ‘Academy of Science Fiction, Fantasy & Horror Films’ with the ‘Saturn Best Actor Award’ for his role in ‘A Boy and His Dog.’

In 1985, Johnson received an ‘Emmy’ nomination for ‘Outstanding Lead Actor in a Drama Series.’

In 1986, he won the ‘Golden Globe Award’ for ‘Best Performance by an Actor in a TV Series’ for his performance in ‘Miami Vice.’

�In 1987, he was nominated for another ‘Golden Globe’ under the same category for the same role in ‘Miami Vice.’

In 1988, he won ‘APBA Offshore World Cup’ in the Superboat class category.

He has been married five times. However, the names of his first two wives have remained undisclosed till date. It is only known that these marriages took place in the late-1960s and were short-lived.

When Don was 22 years old, he began dating Melanie Griffith, who at the time was only 14 years old. They began to live together when she turned 15 and got engaged when she turned 18. Finally, they got married in January 1976. Within six months, they had their marriage annulled.

Quotes By Don Johnson | Quote Of The Day | Top 100 Quotes

See the events in life of Don Johnson in Chronological Order