Advanced Search
Khaled Mohamed Khaled, professionally known as DJ Khaled, is an American radio personality, YouTuber, rapper, disc jockey, record label executive, record producer, author, web celebrity, and hip hop sensation. His YouTube channel is very popular on the internet as it has managed to accumulate more than 8.6 million subscribers. Earlier, he was known by the name ‘Arab Attack,’ but after the 9/11 attacks, he changed his stage name to DJ Khaled. Khaled started his journey to stardom as a radio host and a DJ in a Florida-based radio station. He went on to join the hip hop band ‘Terror Squad’ in 1998. He worked as a radio host for the urban radio station ‘WEDR,’ located in Miami. His snapchat videos, which were popularized by the YouTube channel ‘h3h3 productions,’ gained him popularity and made him an internet celebrity. DJ Khaled has made many albums (bonus tracks & remixes) in collaboration with many celebrities like Rick Ross, Birdman, Lil Wayne, Akon, Kanye West, and Jadakiss. He even received two ‘Grammy’ nominations and won the ‘DJ of the Year Award’ in 2008 at the ‘Ozone Awards.’ In 2016, DJ Khaled wrote a book titled ‘The Keys’ in an attempt to inspire everyone to pursue their dreams and turn them into reality. The book also reveals his path to success. American People
Record Producers
American Men
Louisiana Musicians
American DJs
The Rise to Stardom
DJ Khaled started learning disc-jockeying in his parents’ garage when he was 13 years of age. While in New Orleans, he started networking in hip-hop with rap artists like Lil Wayne and Birdman. Later, he moved to Miami to become a DJ, and Luther Campbell boosted his DJ career by making him a regular DJ for ‘WEDR’ radio station’s ‘The Luke Show.’ With his growing popularity, he went on to release his first official mixtape and followed it up with many albums that became commercial hits. His first solo album named ‘Listennn….the Album,’ released by ‘Koch Records,’ became a moderate hit, peaking at 12th position in ‘Billboard Hot 200.’
Thereafter, he made many other albums in collaboration with rappers like T.I, Fat Joe, Akon, Birdman, Lil Wayne, Ludacris, Big Boi, Young Jeezy, Busta Rhymes, T Pain, Fabulous, P. Diddy, Jadakiss, Nicki Minaj, Snoop Dog, and Jay Z. From 2007 to 2016, he came up with albums, such as ‘We Takin Over,’ ‘I’m So Hood,’ ‘All I Do Is Win,’ ‘I’m on One,’ ‘Out Here Grindin,’ ‘I Got the Keys,’ and ‘I Changed a Lot.’ These albums either got nominated or won the ‘BET Hip Hop Awards,’ and also received gold or platinum certifications.
In July 2016, DJ Khaled released his ninth studio album called ‘Major Key’ after signing a management deal with Jay-Z. ‘Major Key’ became Khaled’s first album to reach number one position on ‘Billboard 200.’ He won ‘Best Video’ award in 2007 for his single ‘We Takin’ Over.’ He also won ‘DJ of the Year’ award consecutively in 2007 and 2008 at ‘Ozone Awards.’ In 2008, he was nominated for the ‘BET Award’ under the ‘Best Music Collaboration’ category for the remix version of the song ‘I’m So Hood.’ He won ‘MVP of the Year’ in 2008, 2015, and 2017. He was honored with ‘Hustler of the Year’ award in 2016 at the ‘BET Hip Hop Awards.’
D J Khaled went on to release ‘Shining,’ the first single of the album ‘Grateful’ (in collaboration with Jay-Z and Beyonce Knowles) in 2017, and it became quite popular. ‘I’m the One,’ the second single from the album, placed him in an elite list of celebrities, which included the likes of Quavo, Justin Bieber, Lil Wayne, and Chance the Rapper. The single received 1.2 billion U.S. streams.
His ninth album ‘Major Key’ is undoubtedly one of his best works. ‘You Mine,’ Khaled's song from the album ‘I Changed a Lot,’ gained a lot of popularity. The song featured popular artists like Trey Songz, Future, and Jeremih.
His eleventh studio album ‘Father of Asahd’ released in May 2019. It featured artists like Cardi B, 21 Savage, and Meek Mill. The album debuted at number two at the ‘US Billboard 200’ and received gold certification within months of its release in the US.
Khaled serves as the president of ‘Def Jam South’ record label. He is also the founder and chief executive officer of ‘We the Best Music Group.’ His estimated net worth is $35 million. 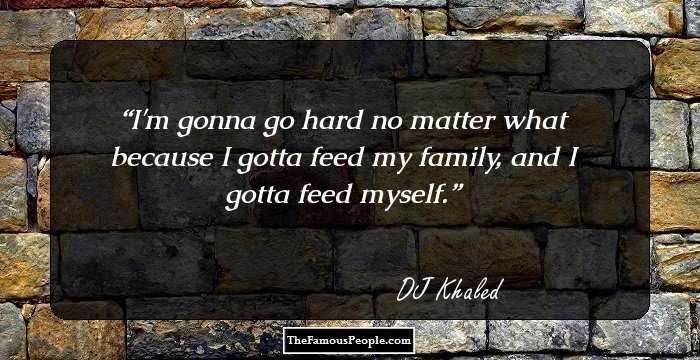 Quotes: Family, I
Behind the Curtains
DJ Khaled was born on 26 November 1975, in New Orleans, Louisiana, USA. His parents, who had moved from Palestine to the US, were musicians who played Arabic music. After migrating to New Orleans with only $20, they sold clothes from their van to fend for their family.
DJ Khaled attended a public school called ‘Dr. Philips High’ but could not complete his education as his family incurred massive financial problems.
DJ Khaled and his fiancée Nicole Tuck (unofficial manager of DJ Khaled) were blessed with a healthy baby boy named Ashad Tuck Khaled on 23 October 2016. He kept the Snapchat rolling during the delivery of his baby and kept on playing cuts from his album ‘Major Key.’
DJ Khaled appeared on ‘Red Nose Day Special’ with celebrities like Ben Affleck, Paul Rudd, Orlando Bloom, and Jack Black to raise fund to provide financial support to underprivileged children. 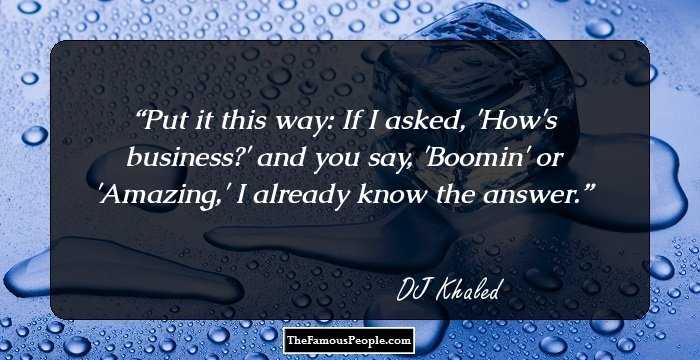 Quotes: You, Business, I

See the events in life of DJ Khaled in Chronological Order