''Disguised Toast'' is the pseudonym of Jeremy Wang, a Canadian 'Twitch' streamer and gamer. He rose to fame playing 'Hearthstone,' a free-to-play online digital collectible card game by 'Blizzard Entertainment.' The Toronto-based gamer is currently not a member of any team and plays as a free agent. Toast started by creating 'Warcraft 3' cinematics and by explaining the logic behind 'Blizzard's card game while analyzing the statistics. He eventually became a full-time streamer on his 'Twitch' channel, where he has gained more than a million followers. He is popular for his ways of creating meme decks and then uses them against his opponents. Toast now claims of knowing more about 'Hearthstone' than its developers do. He gave a historical moment to 'Hearthstone' fans when he defeated one of the strongest players of the game. In just a few years of the release of the game, Disguised Toast's popularity has soared. He is now one of 'Hearthstone's biggest streamers. Mike Grzesiek
Gamers #14
Instagram Stars #243
DID WE MISS SOMEONE?
CLICK HERE AND TELL US
WE'LL MAKE SURE
THEY'RE HERE A.S.A.P
Quick Facts

Canadian People
Canadian Men
Male Youtubers
Canadian Gamers
Canadian YouTubers
Career
Disguised Toast started his self-titled 'YouTube' channel in April 2015. The channel now hosts 'Hearthstone'-related videos, though it started with videos about other 'Blizzard' games that 'Hearthstone' is based on, such as 'Rexxar,' 'The Old Gods,' and 'Warcraft.' Currently, the channel had around 783 thousand subscribers.
Recommended Lists:

Sagittarius Youtubers
Male Social Media Stars
Canadian Social Media Stars
Sagittarius Men
Disguised Toast stepped into the 'Hearthstone' community with his self-created infographics and 'YouTube' videos about the game. Through 'Reddit,' he shared some unusual card interactions that brought him the initial public attention among the community. In March 2017, he participated in the 'ONOG Major Circuit at PAX East' tier 2 and ended up among the top 32. In the tournament, Disguised Toast competed against one of the best 'Hearthstone' players in the world, Sjow. He tricked Sjow by playing the most powerful and destructive card of the game, the 'Sacrificial Pact.' Despite such a historic performance in the tournament, Toast was disqualified, as he had overslept.
In June 2017, Toast got a 72-hour suspension for crashing his game and that of his opponent, resulting in a default victory for him. He also participated in the 'SeatStory Cup VII' tier 1, a 'Hearthstone' tournament series, and ended at the 24th place. Toast owns a website that showcases his merchandise, along with everything related to his streams and 'Hearthstone.'
In October 2017, Toast joined the group of content creators named 'Offline TV' and began living in California. In November that year, he started his second 'YouTube' channel, 'Disguised Toast 2,' to share his 'Twitch' stream highlights. Toast's second channel has over 273 thousand subscribers. A few months later, in February 2018, Toast launched another channel, 'Disguised Toast Daily | StreamRecap,' for his 'Twitch' highlights. Following this, in April 2018, he secured the third posting in the 'PAX East GEICO Hearthstone Showdown' tier 2. Toast has been nominated for the honor of the 'Twitch Streamer of the Year’ at the 11th 'Shorty Awards.’
The idea of the pseudonym “Disguised Toast” hit him while attending a 'Hearthstone Fireside Gathering' tournament, where he wore a mask to disguise his identity. The mask was a toast-shaped cardboard cut-out, with a sunglass and mustache drawn on it. In October 2016, he accidentally revealed his face. Though he was initially worried about losing his career, as he thought his fans never wanted to see the player behind the mask, he was surprised to see his popularity soar after the incident. At 'TwitchCon' 2017, comedian and host Conan O'Brien called the pseudonym "the greatest name in gaming history."
The pseudonym “Disguised Toast,” was derived from the 'Hearthstone' card called 'SI:7 Agent,' which says "This guy's toast" when opened. His logo underwent a transition from digital to physical after Toast attended a 'Fireside Gathering,' an assembly event for local 'Hearthstone' communities.
You May Like

Famous Beautiful Women With Green Eyes
Continue Reading Below
Family & Personal Life
Disguised Toast's real name is Jeremy Wang. He was born on November 25, 1991, in Canada. He is a math major from the 'University Of Waterloo.'
Toast is currently dating Janet Rose, also known as “xChocoBars.” They have been in a relationship for a long time now and have played several games together. Together, they are known as ''Joast.'' However, they use the name mostly while playing against each other and have even earned a hashtag on 'Twitter.' 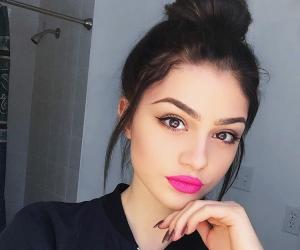