Dick Clark was an American actor, producer, radio and television host best known for hosting the hugely popular American dance and music show titled American Bandstand. Born and raised in New York, he was attracted to the world of radio broadcasting since his childhood years, mostly owing to his father’s job as a radio manager at WRUN Radio Station. After graduating from Syracuse University in 1951, Dick moved to Philadelphia where he worked in WFIL Radio and eventually he got a hosting job at the show Bandstand, which was later renamed as American Bandstand. The musical television show became successful nationwide and became one of the longest-running American television programmes in its genre. Dick established Dick Clark Productions and produced successful shows such as Where the Action Is and Dick Clark’s New Year’s Rockin’ Eve. He further produced American Music Awards and several radio shows such as Dick Clark’s Rock, Roll & Remember. Dick has won four Emmy Awards and has been inducted in the Rock and Roll Hall of Fame, the Radio Hall of Fame and Academy of Television Arts & Sciences Hall of Fame. Dick Clark was born Richard Augustus Wagstaff Clark Jr. on November 30, 1929, in New York, to Richard Augustus Clark and Julia Fuller Clark. His father worked in radio while his mother was a homemaker. Dick had a brother, who passed away during the Second World War in combat.

Since his early childhood, Dick was influenced with his father’s job as a station manager at the WRUN Radio station. He also grew up listening to various radio programmes as television had not become a norm until the early 1950s. He grew up listening to and admiring radio personalities such as Arthur Godfrey and Dave Garroway.

Following the death of his brother in the war, Dick sunk into a deep depression and turned to radio for solace. He completed his high school graduation from the A.B. Davis High School. He was a part of school’s drama club, and he was also exceptionally good in academics, serving as the class president during his senior year.

Following his high school graduation, he enrolled into the Syracuse University, from where he earned a minor degree in radio and majored in business administration in 1951. While in college, he was also a part of Delta Kappa Epsilon fraternity. 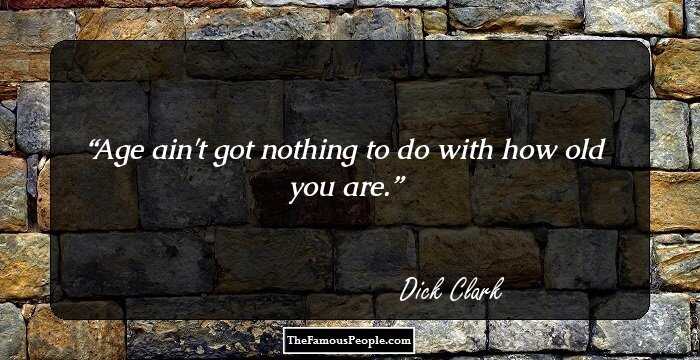 Before he joined college, at the age of 16, he was hired by his father to work in the mailroom of the WRUN radio station, which was owned by Dick’s uncle and managed by his father. His skills impressed his father and within a few months, he was made the weatherman at the station and a few more months later, he was the station break announcer.

However, he left his family radio station after he enrolled into college and worked at a country music station named WOLF-AM. Following his college graduation in the early 1950s, he briefly returned to work with his father at WRUN radio station. He left the job in favour of a television hosting job at WKTV in Utica for the show titled Cactus Dick and the Santa Fe Riders, which was a television program that played country music.

In 1952, he received a job offer from Drexel Hill, Philadelphia, to work in the WFIL radio as a disc jockey. WFIL also broadcasted a television show called Bandstand which was hosted by Bob Horn. In the initial few years, Dick was an occasional host for the program whenever Bob was not around.

In 1956, Bob was arrested and that led the network to hire Dick as a full-time host of the show. The show’s format had teenagers dancing to the latest pop music and Dick came across as the ideal young host for the show. Dick hosted the show for a full year, before he approached the ABC, American Broadcasting Corporation network, to make the show available for a pan-country viewing. Observing the local success of the show, ABC had no reason to not go for it.

ABC hence purchased the show from WFIL and broadcasted it nationally, starting from August 1957. Initially, the show was broadcasted live and ran for 90 minutes on the weekdays. The show popularized many dancing trends such as twist and stroll. In 1963, the show ended its live broadcasting and was turned into a taped show which was broadcasted once a week for an hour-long program. The show ran successfully until 1987.

In the 1960s, the show also began hiring up and coming musicians and featured their live performances. Some of the bands that featured on the show, which was now known as American Bandstand, were Pink Floyd and the Doors. The show became one of the longest-running American musical television programmes. The show was also credited with sparking the rock n roll revolution in America.

Overtime, Dick associated himself more with the music industry and began working as an artist manager and the organizer of live tours. He also entered recording and publishing businesses. He also invested in music-themed restaurants such as Dick Clark’s AB Diner, Dick Clark’s American Bandstand Grill and Dick Clark’s AB Grill etc.

In 1964, the setup of American Bandstand was moved from Philadelphia to Los Angeles, the centre of the American television industry. This led Dick to engage himself in other television productions.

In the mid-1960s, he began his own production house named Dick Clark Productions and one of the first television programmes that he produced was titled Where the Action Is, which was seen as a spinoff to American Bandstand. By the 1970s, Dick Clark Productions also began producing the American Music Awards, which turned out to be a hugely successful venture.

Under his banner, Dick further produced more television shows such as TV’s Bloopers and Practical Jokes and So You Think You Can Dance. He also ventured in producing films for television, such as The Savage Seven and Wild Streets. In addition, Dick Clark Productions also produced more radio programmes, such as Countdown America and The Dick Clark National Music Survey.

His radio show Dick Clark’s Rock, Roll & Remember became particularly successful. The show began airing in 1982 and by mid-1980s, Dick assumed the duties as the full-time host of the radio music show. He hosted the show until 2004. The broadcast was officially ended in 2020.

Seeing the success of Guy Lombardo’s New Year specials for CBS, Dick decided to start his own venture. In 1972, he brought New Year’s Rockin’ Eve, which was broadcasted on NBC. The show featured the new year’s festivities taking place in New York. The show was later purchased by NBC and became huge success towards the late 1970s.

The show became a cultural icon in America and was hosted by Dick until 2004, the year he suffered a stroke. He, however, briefly returned to perform his hosting duties.

In addition, Dick has hosted television shows such as Dick Clark’s Live Wednesday, Dick Clark’s World of Talent, The Other Half and Challenge of the Child Geniuses.

Along with his extensive radio and television work, Dick has also acted in films such as Jamboree, The Phynx, Spy Kids and The Young Doctors.

Throughout his career, Dick has been honoured with several awards, such as four Emmy Awards, Peabody Award and the Daytime Emmy Lifetime Achievement Award. He was inducted in the Hollywood Walk of Fame, Rock and Roll Hall of Fame, the Radio Hall of Fame and the Academy of Television Arts & Sciences Hall of Fame. 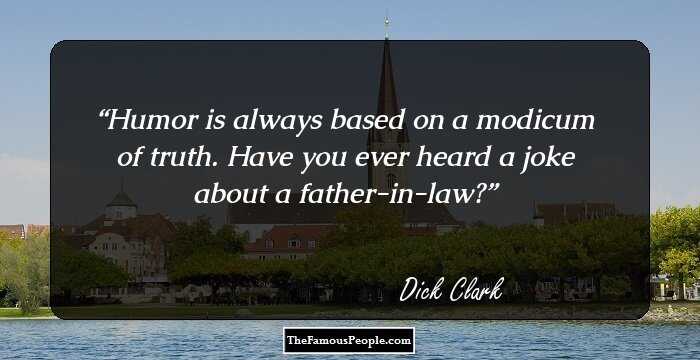 Dick Clark was married thrice, to Barbara Mallery, Loretta Martin and Kari Wigton. His marriages with Barbara and Loretta ended in divorce, while his third marriage with Kari lasted from 1977 until his death. Dick had three children from his first two marriages and none from his third marriage.

In 2004, he revealed in an interview that he was suffering from type 2 diabetes. He also suffered from coronary artery disease in the early 2010s, which was undiagnosed.

He passed away due to heart attack while undergoing a treatment procedure for an enlarged prostate, on April 18, 2012. He was 82 years old at the time of his death.

See the events in life of Dick Clark in Chronological Order