Advanced Search
American cardiologist Denton Cooley is the surgeon who performed the world’s first implantation of a total artificial heart. During the 1960s the techniques of human heart transplant were still in their infancy and at such a time he implanted an artificial heart into a patient when a real human heart was unavailable. This artificial heart helped to keep the patient alive for the 64 hours before a donor heart became available. As a heart surgeon he worked closely with the brilliant senior cardiologist, Michael DeBakey, but the fact that Cooley performed the artificial heart implantation without DeBakey’s supervision created a rift between the two. As a young boy Cooley wanted to be a dentist but changed his mind later on as he grew fascinated with the human heart. He studied medicine at Johns Hopkins in Baltimore where he found a mentor in the experienced doctor, Dr. Alfred Blalock. Having grown up with an alcoholic father, Cooley found in Dr. Blalock a father figure he had sorely missed as a youngster. Under his guidance the hitherto shy and insecure boy thrived and went on to become one of the 20th century pioneers in cardiac surgery. In spite of his hectic schedule he remains a devoted family man and loves to play golf in his free time. William James Mayo
DID WE MISS SOMEONE?
CLICK HERE AND TELL US
WE'LL MAKE SURE
THEY'RE HERE A.S.A.P
Quick Facts

American Celebrities
American Men
University Of Texas At Austin
Male Physicians
American Surgeons
Childhood & Early Life
He was born on August 22, 1920 in Texas. His father was a successful dentist and had a thriving practice; thus the family lived comfortably even during the Great Depression when others were struggling. However, his father was also an alcoholic and thus Denton had a complicated relationship with him.
As a young boy he was shy and insecure but he blossomed into a confident person when he went to school. He was a brilliant student who excelled in academics and also did well in sports.
He enrolled at the University of Texas where he majored in zoology and also played for the college basketball team.
Initially he aspired to become a dentist but later decided to pursue medicine. He began his medical education at University of Texas Medical Branch in Galveston before transferring to Johns Hopkins School of Medicine in Baltimore, Maryland. At John Hopkins he met Dr. Alfred Blalock who became his mentor.
He considered Dr. Blalock to be a pioneer in cardiology and resolved to follow in his footsteps. He obtained his M.D. degree in 1944 and assisted Dr. Blalock in correcting an infant’s congenital heart defect, an operation known as “Blue Baby” procedure. 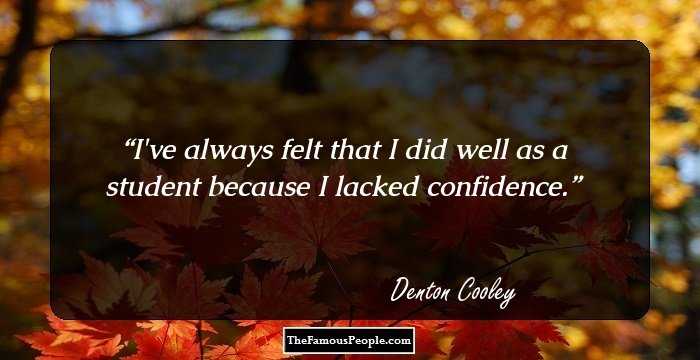 Quotes: I
Continue Reading Below
Career
He joined the Army Medical Corps in 1946 and served as chief of surgical services at the station hospital in Austria. After two years he was discharged with the rank of captain in 1948.
After the World War II, he returned to Hopkins to complete his residency after which he remained there as an instructor in surgery. He went to London in 1950 to work with the eminent British surgeon, Lord Russell Brock.
During the 1950s he moved to Houston to accept a position as the associate professor of surgery at Baylor College of Medicine. He also worked at its affiliate institution, the Methodist Hospital.
The decade of 1950s also saw Cooley working with Dr. Michael E. DeBakey, an eminent cardiologist and a few years senior to Cooley. The two men, both exceptionally brilliant at their chosen field had a tumultuous relationship as their egos often clashed.
Cooley along with his colleagues worked on developing artificial heart valves over the 1960s. His work on artificial heart valves helped to bring down the mortality for heart valve transplants from 70% in 1962 to 8% in 1967.
He performed his first human heart transplant in May 1968, just months after Dr. Christiaan Barnard had performed the world’s first successful human heart transplant.
In 1969, he implanted an artificial heart in a human being for the first time. The patient, Haskell Karp lived for 64 hours with the implanted device before it could be replaced with a donor’s heart. The patient however died a day after the second operation and questions were raised about the doctor’s decision to implant the artificial device in the first place.
The incident of Cooley implanting an artificial heart in a patient was severely criticized by Dr. DeBakey and the relationship between the two doctors was strained beyond repair. Thus Cooley resigned from his post at Baylor.
Cooley was a prolific surgeon and by 1972 he had performed over 1200 bypass surgeries and 10,000 open-heart operations—a world record for a cardiac surgeon.
The Denton A. Cooley Cardiovascular Surgical Foundation was established by the Residents and Fellows of Cooley in his honor in 1972. Today over 900 cardiac surgeons from countries all over the world are members of this prestigious organization.
Major Works
Denton Cooley created history in April 1969 when he implanted an artificial heart in a 47-year-old man, Haskell Karp who was dying of a heart condition. This mechanical heart kept Karp alive for 64 hours before a donor heart could be transplanted. Though the patient did not live for long after surgery, this implantation still remains a medical breakthrough.
Awards & Achievements
The International Surgical Society awarded him the Ren�e Lebiche Prize—its highest honor—in 1967, calling him "the most valuable surgeon of the heart and blood vessel anywhere in the world."
In 1984 former President Ronald Reagan presented Cooley with the US’s highest civilian award, the National Medal of Freedom for his great contributions to the field of medical science.
President Bill Clinton presented him with the National Medal of Technology—the highest honor for technological innovation in the US—in 1998.
Personal Life & Legacy
He married Louise Goldborough Thomas, a registered nurse, in 1949. The couple was blessed with five daughters. Today, he also has several grandchildren.

See the events in life of Denton Cooley in Chronological Order