Advanced Search
David Icke is a prominent English writer and public speaker who has adorned various hats in his lifetime. Icke first served as a footballer, then a sports broadcaster and later a professional conspiracy theorist a profile he holds till date. A Green Party politician and activist, Icke’s life changed in 1990 when a psychic told him that he was sent to heal the Earth. Almost immediately, life changed for this former Grandstand presenter who saw through the real world and claimed to receive messages from the spirit world. Icke claims himself to be the ‘Son of Godhead’. In 1997, he predicted that the world would come to an end and would be devastated by tidal waves and earthquakes. He repeated this prediction on the prime show ‘Wogan’ that drew a lot of flak and criticism. Icke was laughed at and became an object of ridicule whenever he made public appearances. Despite strong criticism and mockery, Icke has been a well received author. His ideas and believes have been transformed into books written by him such as ‘It Doesn’t Have To Be Like This’, ‘The Robots’ Rebellion’, ‘And the Truth Shall Set You Free’, ‘Children of the Matrix’ and so on. As of 2018, Icke has written more than 20 books which have been translated into eleven languages. What’s more, he has come up with numerous DVDs and has lectured across 25 countries, speaking up to 10 hours to audiences. British People
Non-Fiction Writers
British Men
Male Writers
Taurus Writers
Childhood & Early Life
David Icke was born on April 29, 1952, in Leicester General Hospital to Beric Vaughan and Barbara Icke. His father served in the Royal Air Force before serving as a clerk in the Gents clock factory. As a child, Icke preferred to live a life of a loner.
He attended Whiteball Infant School. He played football while in school, serving as a goalkeeper for his team. His academic career ended in 1967 after he was signed by Coventry City as their youth team's goalkeeper. Tragically, his football career ended after rheumatoid arthritis left him physically weak. 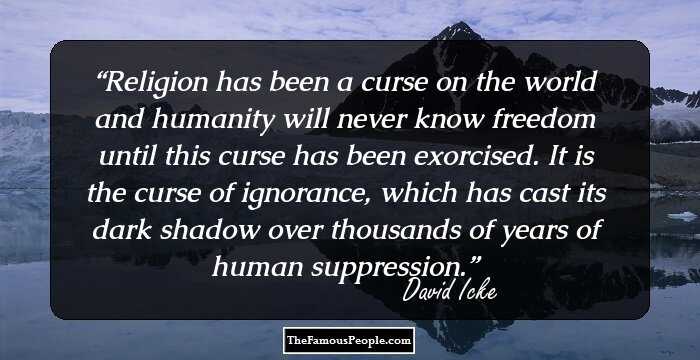 Continue Reading Below
Career
After failing to make a career out of football, Icke found work as a reporter with the Leicester Advertiser. Soon, he moved to work under Leicester News Agency. He then served as the football reporter for the BBC Radio Leicester.
Over the years, Icke’s career as a journalist fared very well as he took prominent position at the Loughborough Monitor, the Leicester Mercury and BRMB Radio. In 1976, his job took him to Saudi Arabia where he travelled with the national football team.
Icke’s career took a leap when he was employed by Midlands Today at the BBC’s Pebble Mill Studios in Birmingham. The organization not just gave him a prominent profile but also on-air appearance.
By 1981, Icke became a sports presenter for the BBC's national programme, Newsnight. In 1982, he took up the maiden edition of BBC’s Breakfast Time, Britain’s first national breakfast show, presenting sports news. In 1983, Icke co-hosted Grandstand, BBC’s flagship national sports programme, thus achieving his long-standing dream.
Towards the end of the 1980s, Icke had become a household name. People reckoned him as one of the most iconic sports journalist of the time. However, a career in television no longer attracted him.
Icke interest in Green politics was stirred when he began to flirt with alternative medicine and New Age philosophies. In just about six months, he became the principal speaker of the political party. Meanwhile, around the same time, Icke penned his second book, ‘It Doesn’t Have To Be Like This’ that presented his views on environment.
It was during the late 1980s and early 1990s that Icke felt a presence around him. He recalled of being led to certain books, one of them being ‘Mind to Mind’ by Betty Shine, a psychic healer. He visited Shine a couple of times. It was during the fourth meeting that Shine told him that he was sent to Earth for greater purpose of being a healer. She also delivered him a message from Wang Ye Lee of the spirit world.
According to Shine, Icke’s connection with the spirit world would make him world-famous but also draw a lot of opposition from the people. He often spoke what was told to him by the spirit world.
Between 1991 and 1993, Icke wrote about five books ‘The Truth Vibrations’, ‘Love Changes Everything’, ‘In The Light of Experience’, ‘Days of Decision’ and ‘Heal the World’ that gave a glimpse of his connection with the spirited beings. He predicted of having new flying machines that would help in transit. He forecasted about occurrences of earthquakes in the most unusual of places.
Continue Reading Below
In 1991, Icke visited a pre-Inca Sillustani burial ground near Puno, Peru. As he inched near to the area, he felt drawn to the circle of waist-high stones. A flush of new ideas overlapped his mind and he experiences a surreal feeling of Kundalini, in which one activates his chakras or energy centres by triggering a higher level of consciousness.
In 1991, Icke resigned from the Green Party. He claimed himself to be the ‘Son of Godhead’, wherein Godhead referred to as the ‘Infinite Mind’. He started wearing ‘only turquoise’ thus initiating his ‘turquoise period’. He believed the colour to be the channel for positive energy. Icke claimed that the world to come to an end and would be devastated by tidal waves and earthquakes.
Icke’s predictions about the world coming to an end attracted a lot of attention from the media houses. In April 1991, he appeared for an interview at Terry Wogan’s prime-time Wogan Show wherein he repeated his prediction. The show proved to be a life-turner for Icke, damaging and ruining his reputation completely. He was laughed at by the audience and became an object of ridicule. Wogan who was criticized for the show, re-interviewed Icke in 2006 for the ‘Now & Then’ series, apologizing for his conduct.
In the next 11 years, Icke penned about a collection of works, from ‘The Robots’ Rebellion’ in 1994 to ‘And the Truth Shall Set You Free’ in 1995. He even came up with ‘Children of the Matrix’ in 2001 wherein he developed his worldwide view of New Age conspiracism.
Icke’s view of New Age Conspiracism dawns at the fact that the universe is made up on vibrational energy and that the reptiles have controlled the Earth and human beings from times immemorial. He claims that they even manipulate global events to keep humans in a constant state of fear. Icke believes that the only way this influence can be defeated is by humanity waking up to ‘the truth’, and filling their hearts with love. 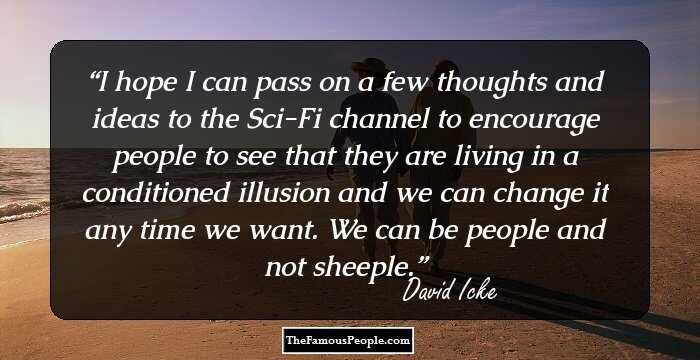 Personal Life & Legacy
David Icke has been twice married. His first marriage was to Linda Atherton. He first met Linda Atherton in May 1971 at a dance at the Chesford Grange Hotel near Leamington Spa. By September the two tied the nuptial knot. In 1975, they welcomed their daughter and thereafter had two sons in 1981 and 1992, respectively. The marriage lasted till 2001. However, despite their divorce Linda continued to work as David Icke’s business manager.
While being married to Linda, Icke developed a relationship with Deborah Shaw, an English psychic who lived in Canada. Deborah started living with Icke and his family. The relationship between the two also led to the birth of a daughter in December 1991. However, the two stopped seeing each other.
Immediately following his divorce with Linda in 2001, Icke married Pamela Richards. This marriage lasted until 2011.
Recommended Lists:
Miscellaneous #232

See the events in life of David Icke in Chronological Order