Advanced Search
Anthony Jay Robbins, popularly known as Tony Robbins, is an American life coach, public speaker, and author. The most famous works of his career are his books ‘Unlimited Power’ and ‘Awaken the Giant Within.’ He is also known for his innovatively designed seminars ‘Unleash the Power Within’ and ‘Mastery University.’ He writes and talks on subjects like health and energy, breaking conventional fears, accumulating more wealth, optimum utilization of the available resources, maintaining and enhancing relationships and communication. He was inspired to make a career out of motivational speaking when he worked under Jim Rohn who taught him that happiness and success are based on perception and hard work. He has attained a celebrity status through his much-publicized ‘firewalk’ seminars and by featuring in magazines like ‘Time,’ ‘Newsweek,’ ‘Fortune,’ ‘Forbes,’ ‘Life,’ ‘GQ,’ ‘Vanity Fair,’ ‘Businessweek,’ etc. He also co-hosted ‘Oprah’s Lifeclass’ with Oprah Winfrey on OWN Network. He is a successful entrepreneur, and serves as the chairman of privately held industries, such as hospitality, education, media production, business services, and nutraceuticals. He is the founder of the ‘Robbins-Madanes Center for Strategic Intervention,’ which produces training materials and programs for the therapeutic community. 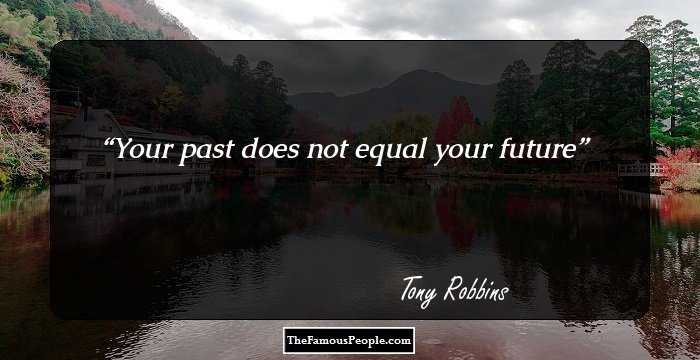 Quotes: Future, Past
Continue Reading Below
Career
Robbins started his career by promoting Jim Rohn’s motivational seminars. Jim Rohn was a motivational author and speaker as well as an entrepreneur.
Jim Rohn explained to him that happiness and success depends on what one does with the available resources in his or her life. Robbins was inspired by Jim and began life coaching.
He started teaching neuro-linguistic programming (NPL) and Ericksonian Hypnosis after getting trained from the co-founder of NPL. In 1983, he learnt firewalking from Tolly Burkan, father of the global firewalking movement, and started integrating it into his seminars.
Robbins’ popularity increased when he started selling his programs in forms of books and TV infomercials. He became known as a ‘peak performance coach’ and gained a lot of recognition.
His first major book ‘Unlimited Power’ was published in 1987. It deals with topics, such as health and energy, overcoming fears, persuasive communication, and enhancing personal relationships. Although the book was a bestseller in America, its originality was disputed.
Robbins’ next big book ‘Awaken the Giant Within’ came out in 1991. He used his own technique, 'Neuro-Associative Conditioning,' while trying to provide his readers with personal developmental techniques. The book was followed by ‘Giant Steps’ (1994) and ‘Notes from a Friend’ (1995).
In 1991, the ‘Anthony Robbins Foundation’ was launched to empower students and prisoners through food drives and learning programs based on Robbins’ teachings.
Since he was already famous through his books and TV infomercials, he started his ‘Leadership Academy’ seminar in 1997. With the success of these seminars, he became a featured speaker on the seminar circuit, sponsored by ‘Learning Annex.’
With his immaculate reputation as a self-help speaker, he became the featured speaker at the 2007 ‘Technology, Entertainment and Design’ (TED) conference. His speech was the sixth-most popular TED talk as of 2012.
Continue Reading Below
Robbins is the founder of ‘Robbins-Madanes Center for Strategic Intervention,’ which deals with personal, family, and organizational psychology. He also conducts seminars, including his four-day ‘Unleash the Power Within’ (UPW) seminar and ‘Mastery University.’
In 2009, Robbins founded ‘Business Mastery Program’ which focuses on endowing business leaders with techniques to manage and grow their businesses. The seminar is conducted live by Robbins and features guest speakers like Steve Wynn, Peter Guber, etc.
Robbins acted in ‘The Singularity Is Near: A True Story about The Future’ in 2010. Before that, he had made cameo appearances in movies like ‘Shallow Hal,’ ‘Reality Bites,’ ‘Men In Black,’ etc. He has also appeared in various TV series.
In 2010, ‘Breakthrough with Tony Robbins,’ a reality show showcasing Robbins work his magic on the show's participants, was launched by NBC. However, it was canceled shortly after due to low viewership. It was then picked up by OWN Network.
Robbins partnered with Peter Guber and Ted Leonsis and purchased ‘Team Liquid,’ an eSports pro gaming organization, in 2016. The following year, ‘Team Liquid’ won ‘The International 7,’ a ‘Dota 2’ tournament worth $24 million.
In 2014, he published ‘Money: Master the Game’ which peaked at number one on ‘New York Times’ best-selling list in December. In 2017, he co-authored ‘Unshakeable: Your Financial Freedom Playbook.’ 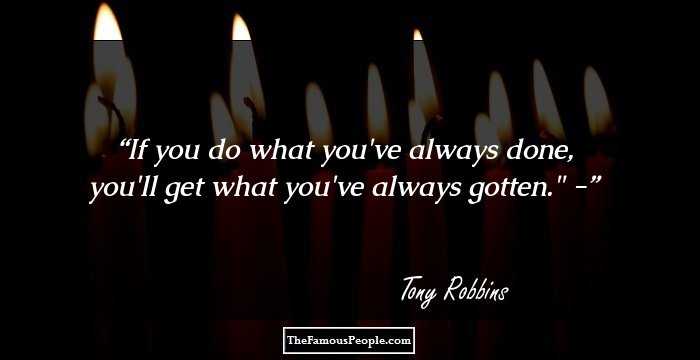 Quotes: You
Major Work
Robbins’ four-day seminar ‘Unleash the Power Within’ is considered his most prominent work. The seminar is based on the concept of how successful people overcome their fears. ‘Mastery University’ is also among his most successful works.
Personal Life & Legacy
Robbins got married to Becky Jenkins in 1982. Becky has three children from her previous marriages; Robbins adopted them. Robbins and Becky divorced after nine years of marriage. In 2001, Robbins got married to Sage Humphrey.
Trivia
Robbins has interacted with famous personalities like Nelson Mandela, Mikhail Gorbachev, Bill Clinton, Margaret Thatcher, François Mitterrand, and Princess Diana. He jotted down these experiences in his book ‘Awaken the Giant Within.’
Robbins was diagnosed with brain tumor in 1994 but he got it removed soon after.
He has a son named Jairek Robbins with his former girlfriend Liz Acosta.
In 2001, Robbins was called a “hypocrite” by ‘The Vancouver Sun.’ He retaliated by filing a lawsuit against the publication, alleging defamation and libel. He was given US$ 20,000 in compensation.
An investigation by ‘BuzzFeed News’ detailed accusations against Robbins of sexual harassment by fans and staffers in 2019. The same year, ‘BuzzFeed’ published a six-part article condemning Robbins of molesting a teenage girl during his time as a "star speaker" at ‘SuperCamp’ in Southern California. The article states that the event took place in 1985 and that there were at least two eyewitnesses.
Recommended Lists:
Writers #267
Miscellaneous #138

See the events in life of Tony Robbins in Chronological Order