David Brooks is a Canadian born American journalist, social analyst and leading political commentator. He is a profound observer of the American way of life and a knowledgeable analyst of current political scenario and foreign affairs. As an undergraduate, he frequently contributed reviews and satirical pieces to campus publications. After completing his graduation, he began his career as a police reporter which had a clear influence on his perception of the society. Initially he was a liberal philosopher but later emerged as a light conservative. Later, he worked with many newspapers and magazines as a correspondent, film critic, and as an editor. He has also appeared as a radio commentator and expressed his opinions on a number of social and political issues. In addition to being an analyst, he is also a prolific author who has written masterpieces, such as ‘Bobos in Paradise’ and ‘On Paradise Drive’, emphasizing on the cultural and social influences prevailing in America. Both the works are in a style he termed as ‘comic sociology’ which questions our living methods in an amusing, entertaining and thought provoking manner. He possesses the gift of bringing the audiences face to face with the essence of our times in a comical and insightful way. He has emerged as an astonishing writer, an unmatched journalist, and a savvy analyst of present times. Avan Jogia
Journalists #177
Newspaper Columnists #15
Writers #727
DID WE MISS SOMEONE?
CLICK HERE AND TELL US
WE'LL MAKE SURE
THEY'RE HERE A.S.A.P
Quick Facts

American People
Canadian People
Journalists
Newspaper Columnists
American Men
Canadian Men
Childhood & Early Life
He was born on August 11, 1961 in Toronto, Canada, to a Jewish family. His father was an American citizen living in Canada. His father was a professor of English literature at New York University while his mother studied nineteenth-century British history at Columbia.
He received his early education from the Grace Church School. Later, the family moved to Philadelphia where he completed his high school from the Radnor High School in 1979.
In 1983, he obtained his Bachelor in Arts degree in history from the University of Chicago. 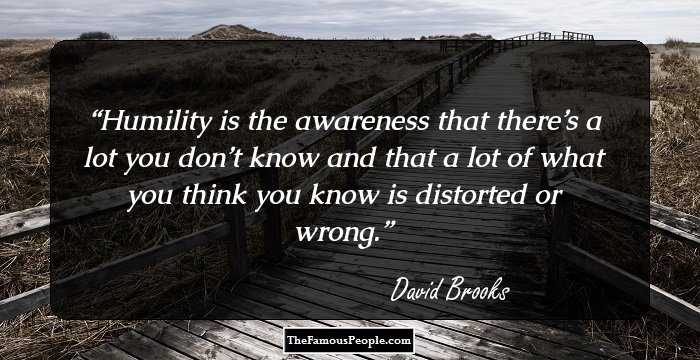 The Best Black Actresses Of All Time
Career
After completing graduation he became a police journalist for the City News Bureau, a wire service owned jointly by the ‘Chicago Tribune’ and ‘Chicago Sun Times’. This job, as a reporter of Chicago's crime beat, had a conservatizing influence on his personality.
In 1984, he was admitted as an intern in Buckley's ‘National Review’ magazine. The training included an all-access license to the wealthy lifestyle that Buckley enjoyed as a wealthy author and commentator. After completing his internship he spent some time at the Hoover Institute at Stanford University and then joined the Washington Times where he worked on editorials and film reviews.
In 1986, he was appointed by ‘The Wall Street Journal’, initially editing the paper’s book reviews and briefly serving as a film critic. He also worked at the paper’s Brussels office as an editor and foreign correspondent. By the end of his tenure with the Journal in 1994, he had become an editor of the paper’s opinion page.
In 1995, he served as a senior editor at ‘The Weekly Standard’ magazine and also a contributing editor of ‘Newsweek’ magazine. In addition to his news reporting, he also wrote articles for several other magazines, including the ‘The Atlantic Monthly’.
He was a frequent collaborator as an analyst on NPR’s show ‘All Things Considered’ and the ‘Diane Rehm Show’. His articles have appeared in the leading newspapers and magazines including ‘The New Yorker’, ‘The New York Times’ Magazine, ‘Forbes’, the ‘Washington Post’ and ‘The Public Interest’.
He is also a noteworthy writer who published his literary works such as ‘Bobos in Paradise: The New Upper Class and How They Got There’ (2000) and ‘On Paradise Drive: How We Live Now (and Always Have) in the Future Tense’ (2004).
He is also the author of ‘The Social Animal: The Hidden Sources of Love, Character and Achievement’ and the volume editor of 'The Best American Essays’. He was the editor of the anthology ‘Backward and Upward: The New Conservative Writing’.
In 2006, he served as a visiting professor of public policy at Duke University's ‘Terry Sanford Institute of Public Policy’ where he taught an undergraduate seminar.
In 2013, he taught a course on philosophical humility at Yale University. 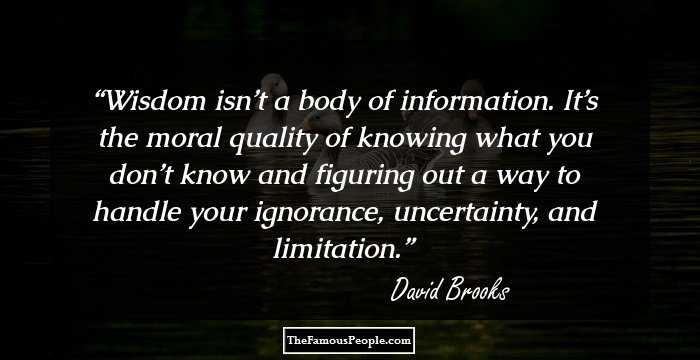 Quotes: You
Major Works
He is best known for writing an op-ed column for ‘The New York Times’ and for being a political analyst for ‘The News Hour with Jim Lehrer’, a television news program.
In 2004, he established an award to honor the best political and cultural journalism of the year. Named after the great philosopher Sidney Hook, ‘The Sidney Awards’ are presented every year.
Awards & Achievements
He has received several honorary degrees from prestigious institutions such as the Williams College, New York University, Brandeis University, and Occidental College among others.
In 2010, he was honored with the membership of the American Academy of Arts and Sciences. 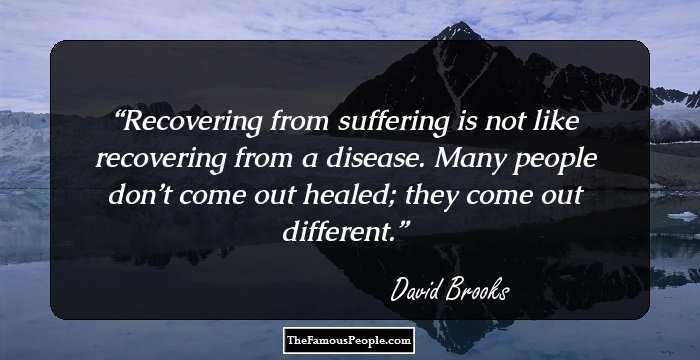 Quotes: Like
Personal Life & Legacy
He met his wife, Jane, while studying at the University of Chicago. The two got married in 1986. Later, she got converted to Judaism and changed her name to Sarah. The couple is blessed with three children.
Recommended Lists:
Media Personalities #585
You May Like

Quotes By David Brooks | Quote Of The Day | Top 100 Quotes

See the events in life of David Brooks in Chronological Order